It’s an achievement AU is proud of, even going so far as to plaster the statistics on the side of some shuttle buses. Mary Caroline Brazill, a rising senior in the School of International Service, and Eric Rodriguez, a recent graduate of the College of Arts and Sciences, have both become 2014 Truman Scholars.

The Harry S. Truman Scholarship Foundation identifies students with a passion for public service and awards them $30,000 towards graduate school. Brazill and Rodriguez have joined the ranks of people like former U.S. Secretary of Homeland Security Janet Napolitano and senior CNN legal analyst Jeffrey Toobin.

AU has been home to 13 Truman scholars since 2000, including Brazill and Rodriguez. Around 600 candidates are nominated for the scholarship by their universities, according to the Truman Scholarship website. Out of those, 59 students became Truman Scholars in 2014.

Mary Caroline Brazill
Despite a long history of public service, Brazill wasn’t initially sure that the Truman Scholarship was for her.

“I knew I wanted to do work in local communities in Sub-Saharan Africa,” Brazill wrote in an email, “and I had this image in my mind of Truman winners as very government, policy-level based.”

It wasn’t until she dug deeper into past scholars that Brazill decided to start the application process. According to Brazill, the initial application is 15 short answer questions and a section where the applicant identifies a flaw in a piece of legislation and proposes a solution.

Brazill wrote more than 10 drafts of her application before submitting it.

“About three-fourths of the way through, I ended up revamping the tone and emphasis of my entire application, which was simultaneously exciting and terrifying, but definitely the right decision,” she said.

It ultimately paid off. Brazill’s application was chosen for a panel interview, where she competed with eight people for the Pennsylvania scholarship.

“I was really surprised at how many people were internationally focused— Arabic speakers, Chinese speakers and multiple students flown in from study abroad locations,” she said. “[I felt] unbelievably anxious and honestly a bit defeated. I thought I didn’t measure up.”

Brazill was at her internship with the Department of State. Late in the afternoon, she received a phone call from an unknow District of Columbia number.

“I ran to the back of the office in our big conference room, shut the door, took a breath and answered the call,” Brazill said. “President Kerwin was on the other end of the line, and he told me congratulations, that I had won! I remember letting out a bit of a scream— sorry, President Kerwin— and asking him if he was serious.”

Brazill is no stranger to accepting awards. She spent the past year in Zanzibar, Tanzania as a 2013 Boren Scholar, where she became an advanced Swahili speaker. That time abroad helped solidify her commitment to working with local communities, she said.

“I felt most valuable and most competent when I was interviewing local lawyers or holding an hour long workshop with secondary school students about human rights,” she said.

Before grad school, Brazill hopes to spend one to two years in Sub-Saharan Africa. After completing a graduate degree in human rights studies, she said she hopes to enter the non-profit sector and work on designing and implementing post-conflict programing.

“I know conflict resolution is complex, multi-dimensional and challenging,” Brazill said. “I was taught that there is always a solution; where there is a will, there is a way. Regardless of circumstances or emotions or obstacles, I was told that I had the ability to navigate the twists and turns and to find an answer.”

Eric Rodriguez
Eric Rodriguez, 27, is a first-generation college student from the Yakama Reservation in Wapato, Washington.

“I was born and raised on the reservation,” he said. “I grew up in the housing projects. That’s where [my family] still live[s], they’re still there.”

Rodriguez’s experience with public service started early. At 18, he became a volunteer firefighter and once he turned 21, a tribal police officer.

“It was basically just trying to change the philosophy of policing and being proactive,” he said.

As a police officer, Rodriguez addressed issues like teen suicide and domestic violence. He realized he needed to get his degree when he went to tribal high schools and encouraged the graduating seniors to attend college.

“One person asked me, ‘So where did you go to school?’ and I didn’t finish community college,” he said. “So I just knew I had to go back to school and finish my education, so I could make more of an impact.”

The best place to make an impact was at AU. Going to school in D.C. meant that Rodriguez could learn about how federal American Indian policies were developed, he said. So two and a half years ago, over six years after he graduated high school, Rodriguez started at AU.

“It kind of fit perfectly, because [public service] is what I want to do anyway,” Rodriguez said.

After sending in his application, the Office of Merit awards held mock interviews to help Rodriguez prepare.

“I think the mock interviews were more rigorous than the actual interview,” he said, laughing. According to Rodriguez, the Truman interview was 20 minutes, with around eight people asking him questions.

Rodriguez graduated from AU earlier this May with a degree in anthropology and plans to go to law school this fall. Rodriguez wants to use that education as an in-house tribal lawyer. Tribal leaders go to attorneys to make decisions, he said, meaning that’s the best place to make a positive impact. 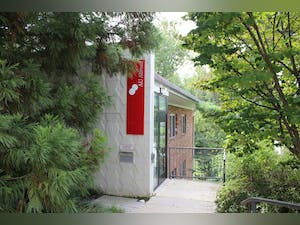