Before this legislation, students were able to apply for reciprocity permits, which allowed them to legally park in residential neighborhoods without changing their state driver’s registration.

A June 2012 report from the Committee on the Environment, Public Works and Transportation said the law is designed to resolve the problem of student-owned car congestion blocking residents from parking.

While this law affects the entire D.C. community, it has specific significance for AU.

“This bill would address this problem [of student parking] by expanding the prohibition on issuing Reciprocity Permits to students to include the neighborhoods surrounding American University,” the report said.

The new law will cost the District $261,500 in “lost permit revenue” between the fiscal years 2012 and 2016, according to a June 2012 memo from D.C. Chief Financial Officer Natwar M. Gandhi. Students previously paid $338 for a reciprocity permit but will no longer pay this fee, according to Natalie Wilson, a representative from Gandhi’s office.

Registering a vehicle in D.C. can cost anywhere from $30 to $70 per year, according to the Department of Motor Vehicles’ website.

While registering a vehicle in D.C. may be cheaper than paying for a reciprocity permit, Policy Director of D.C. Students Speak and School of Public Affairs junior Evan Brown said the law will create other costs.

“It is important to remember the hundreds of extra dollars that students will have to pay insurance companies, as well as the time and hassle it will take to obtain a license, tags, and register an individual or family car here,” he said in an email.

D.C. Students Speak, a city-wide coalition that promotes student rights, said it disagreed with the law.

“The bill’s passage was another sign that needs of students are being ignored in the political process,” its July 11 press release said.

Brown said this is an issue because the law directly attacks students.

“[It] is another clear sign that the D.C. Council is continuing to target college students, and specifically those at American University, instead of focusing on sound transportation policy,” he said.

Jones said he would like to see a permit-based parking system that allows temporary residents, such as students, to park residentially without registering their licenses with the city, similar to reciprocity permits. He also wanted to ensure that neighbors’ parking rights were not harmed in the process.

Cheh, who represents the AU area, and ANC 3D Commissioners Tom Smith and Kent Slowinski, who also represent parts of AU, did not respond to multiple requests for comment.

ANC 3E02 Commissioner Matt Frumin, who represents the Tenleytown area, said the act deters car use and removes students’ “special benefit” to obtain a parking permit without registering their vehicle.

“I support the act because I do think that the rationale of discouraging students from bringing cars and addressing the potential burden on the nearby streets is legitimate,” he said.

Frumin doesn’t feel the law is discriminatory against students but also made clear that he enjoys the University’s presence in the area.

He said that in order to help students’ travel in the District, he would work on enhancing public transportation. Frumin also feels that if students do wish to have parking options, they should pay for them through the University.

AU Student Government President and SPA senior Emily Yu said she is worried about the new law because it can be confusing for students.

Yu is working with D.C. Students Speak to create a factsheet to educate the University population on the new policy by the time classes start.

She believes that this kind of legislation was not the best way to address student parking problems. 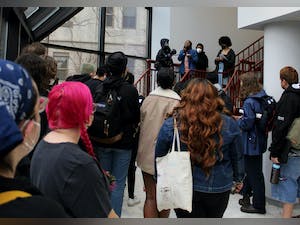 Students, faculty reflect on University's efforts to support students of color on campus