In a recent Newseum event, PBS television anchor Gwen Ifill defended her recent book, "The Breakthrough: Politics and Race in the Age of Obama," against criticism that it contained pro-Obama biases.

The book describes the rise of a new generation of black politicians in America.

Ifill told the audience in the small Knight TV studio Saturday that these new leaders are well educated and optimistic, having "walked through doors their parents opened."

"Barack Obama is just the leading edge of the wave," she said,

Ifill said her career began at the Boston Herald and The Baltimore Sun. She said she transitioned from print to broadcast reporting at the insistence of late "Meet the Press" moderator Tim Russert, who convinced her to leave the New York Times and join NBC News.

"I still miss him," she said. Russert died June 13 of a heart attack.

Ifill currently serves as moderator and managing editor of "Washington Week" and senior correspondent for "The NewsHour with Jim Lehrer."

During her talk, Ifill addressed the small controversy that erupted before the debate. At the time, many conservatives, including blogger Matt Drudge, questioned her objectivity, arguing that her forthcoming book was "pro-Obama."

Chris Golden, sophomore in the School of Public Affairs and a self-described Ifill fan, said he thought the allegations were overblown.

"[Ifill is] a very accomplished journalist who sets a standard for others in the field," Golden said.

Ifill defended her record during the event, accusing her critics of making judgments about a work in progress.

"The book was in chunks and pieces all around my house," she said. "In this age of blogging and internet opinion-making, you have to have a pretty tough skin."

The audience laughed as Ifill recalled how this controversy coincided with her falling down stairs and breaking a leg.

"I was in pain on many different levels," she said.

Ifill spoke as part of a taped speaker series at the Newseum called "Inside Media."

After the talk, she signed copies of "Breakthrough" down the hall from the studio.

Host and moderator of Newseum programs, Sonya Gavankar, interviewed Ifill and then oversaw the book signing.

She described the "Inside Media" speaker series as "conversations between newsmakers and newsbreakers."

A class of 1999 AU graduate, Gavankar also formerly anchored for ATV. The crowd Ifill drew was "definitely one of the biggest and the most interactive," she said.

"There was certainly a lot of interest," she said, watching Ifill take photographs with fans.

Ifill told The Eagle she has been pleasantly surprised by that interest.

"It's very exciting," she said, adding that her book tour is going well.

She attributes the early success of her book to the American people's current interest in D.C. and the new Obama administration.

"There's a real fascination," Ifill told the audience during her talk. "People are very interested in what's happening right now."

You can reach this writer at news@theeagleonline.com. 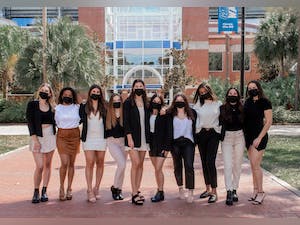