An unusual vehicle was parked outside Mary Graydon Center Thursday afternoon - a 32-foot "classic" trailer, able to sleep up to eight people and complete with a kitchen and bathroom. But the slogans taped on the trailer's sides - one of which listed the days that have passed since Hurricane Katrina hit land - revealed the trailer's purpose as a traveling classroom.

This was one of the trailers the Federal Emergency Management Agency distributed to Hurricane Katrina survivors who lost their homes.

Sam Bass and Derrick Evans, the two Turkey Creek, Mo., residents inside the trailer, drive across the country to speak on the behalf of the 49-state diaspora of hurricane survivors - the renters and other Gulf Coast residents who did not receive trailers.

Bass and Evans came to AU and the Washington College of Law to educate students about the struggling hurricane recovery efforts.

"We're survivors of Hurricane Katrina," Evans said. "We didn't lose our homes, although we had a lot of damage, but people in our community did."

He purchased his trailer, which he named the KatrinaRitaVille Express, from FEMA through a friend.

"They couldn't get rid of them fast enough because they were toxic," Evans said. "Now they've become an icon of inadequate housing and fraud that occurred before, during and after Hurricane Katrina."

Amelia Parker, the program coordinator of the Center for Human Rights and Humanitarian Law at the Washington College of Law, invited Evans to bring the trailer as part of Gulf Coast Recovery Week. The trailer visit was also coordinated with the end of the Human Rights Film Series from Oct. 15 to Nov. 14.

During Evans' visit, the film series showed the film "When the Levees Broke," in the Wechsler Theatre.

"It's kind of hard to miss on the quad," said Brett Schwartz, a CHRHL project associate. "It's been three years [since Katrina], but the recovery is far from over. On such an active campus, people want to know how they can get involved."

FEMA provided 143,752 mobile homes and other trailers to people along the Gulf Coast in the wake of Katrina, as well as Hurricane Rita, a storm that made landfall along the border between Texas and Louisiana on Sept. 24, 2005. Concerns about high levels of formaldehyde in the trailers led FEMA to work with the Environmental Protection Agency and the Centers for Disease Control to determine the cause of the problem, according to information on FEMA's Web site. Federal scientists at the Lawrence Berkeley National Laboratory released a report in early July in which they indicated cheap wood and poor ventilation design caused the high formaldehyde levels to build up in the trailers. By that time, FEMA had received 11,000 health complaints. Katrina survivors continued to occupy approximately 19,000 trailers at the time, according to The Washington Post. FEMA reported 16,000 families still occupied trailers as of Aug. 26, 2008.

After FEMA discovered the trailers' toxicity, the agency began to aggressively shut down trailers, Evans said. Agency representatives negotiated with families individually, offering one-way plane tickets and three months of rent money if they would move out.

As a result, many families ended up without homes or other resources, he said.

"Where have all these people gone? My guess is they are doubled or tripled up in the remaining trailers, or up and leaving and becoming part of the vast Gulf Coast diaspora," Evans said.

This housing crisis is one of the issues Bass and Evans protest during their travels. Evans and other volunteers drove the trailer on many cross-country journeys, reaching the 30,000-mile mark in August 2007.

During the trailer's previous two visits to D.C., it parked outside the Capitol Building and FEMA's and American Psychological Association's headquarters.

"The trailer is a vehicle for education and advocacy," Evans said. "Once you address people's ignorance about an issue, you make them aware and then they want to do something to help."

Tor Hodenfield, a senior in the College of Arts and Sciences, said he stumbled onto the trailer on the main quad.

"I wouldn't have known [Gulf Coast recovery] was like this," he said. "The most revealing thing I heard about it was the Spike Lee documentary ['When the Levees Broke']. The media coverage on this issue is definitely lacking."

Human rights and environmental crises exist not only in New Orleans post-Katrina, but also across the entire Gulf Coast, according to Evans. Multiple storm systems have occurred in the region since Katrina's landfall.

The environmental disaster results from the loss of wetlands, he said. Wetlands are natural mechanisms for slowing down or absorbing hurricanes.

After the initial disaster, a phenomenon Evans called the "honeymoon period" occurred.

"There's a high spirit of humanity among people and low skepticism of the government," he said. "But volunteers do not have enough resources to fix every broken roof or to gut every house. What we need is a massive infusion of government resources."

AU students have organized an Alternative Break trip to New Orleans. Participating students will help to rebuild homes for low-income families this spring break. AU's Washington College of Law also organized a separate trip to the Gulf Coast for students to help with hurricane recovery.

Alyssa Piccirilli, a junior in the School of International Service who lived and volunteered in Louisiana's St. Bernard Parish for two months this summer, said she plans to participate in the AU trip this spring.

"I think it's great you guys are here supporting the cause," she said. "In March, I went with AU to the rebuilding program, but we didn't address a lot of the issues down there. FEMA inspections are taking too long and with the bureaucracy going on, people come home and find that their house has been bulldozed."

You can reach this staff writer at klitvin@theeagleonline.com. 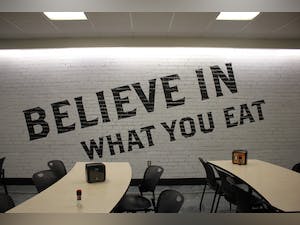