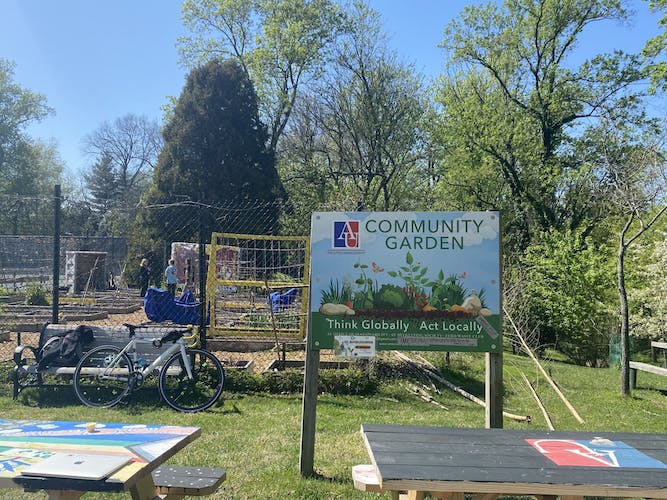 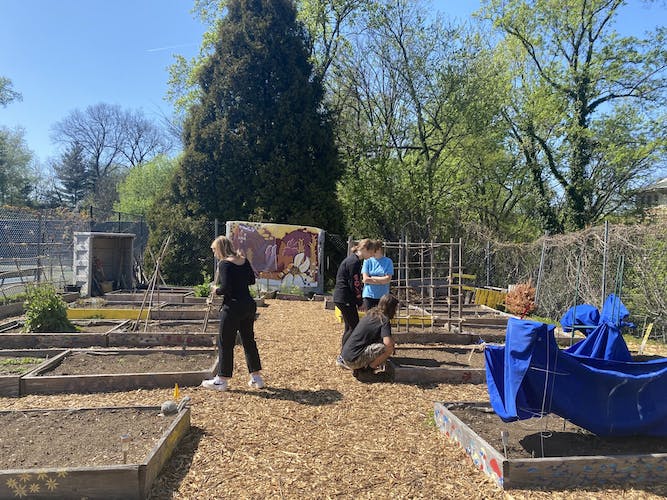 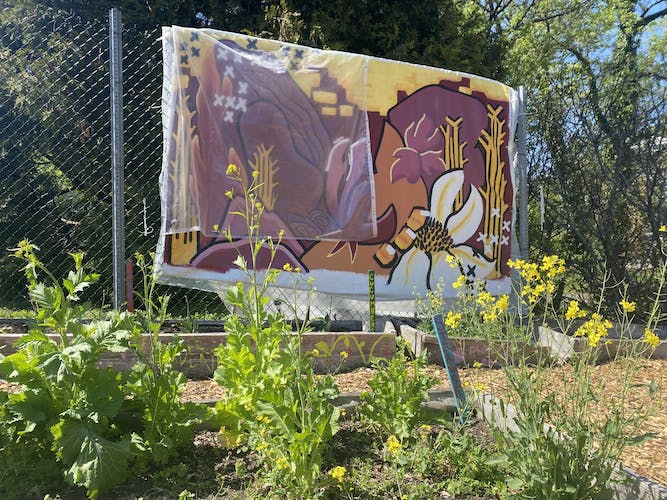 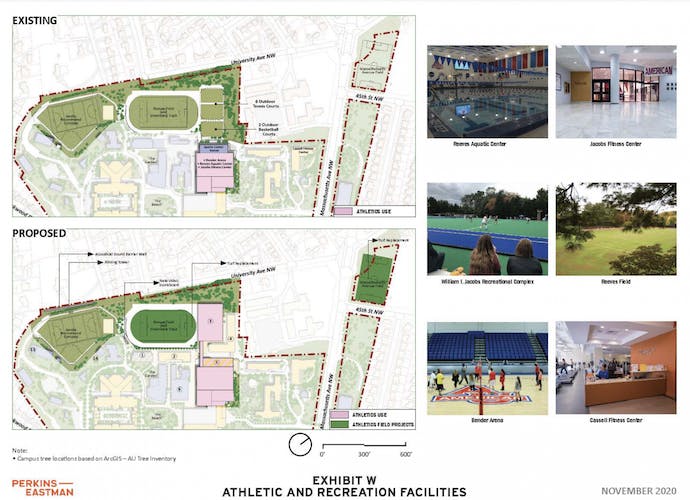 The current American University community garden space will be displaced due to construction of the new Center for Athletic Performance (CAP), beginning on an unknown date after the 2022-2023 academic year.

The 2021 AU Campus Plan, which proposed the construction of a new athletic facility and other new campus sites, was approved by the District Zoning Commission in early April. Planning of the facility is still preliminary, so it is unconfirmed whether the facility will be placed directly on top of the garden, according to Mike Mastrota, AU facilities management arboretum manager. Regardless, construction will either demolish or heavily disrupt the existing garden space.

“It’s been a rollercoaster of emotions throughout the past two weeks of just feeling really distraught and disappointed right at the beginning,” AU’s community garden president and School of International Services senior Sydney Spencer said. “I have been satisfied with the response that the University has taken since then, particularly from Facilities Management. Their support has been really awesome.”

Even if the space itself is not demolished, construction at a close proximity will create difficulties, like light blockage and soil contamination, according to Spencer. The space may be demolished even if the facility isn’t directly on top of the garden so that it can be used as a staging area, Spencer said.

The group is hoping to relocate to a space behind Katzen Arts Center after the garden is displaced, according to Spencer. Mastrota said this space is unconfirmed.

Ashley Hocking, a College of Arts and Sciences sophomore community garden club member, said that she, Spencer and others had known about the construction plan for a few years but received conflicting messages from Facilities Management about the timeline and impact of the project, which are still not entirely clear.

“The details have not been worked out. We don’t even have an architect on board yet to design it, so we don’t know how big the building will be exactly,” Mastrota said. “We don’t even know if it’s going to be over the community garden or not at this point. We’re preparing for, if it does, that we would need to relocate it.”

Elizabeth Deal, AU’s assistant vice president for community and internal communication, said in an email that the next step for the University in implementing the campus plan is further evaluating the specifics for each project in the plan, including the CAP.

“Each project will feature an individual review process, including campus and neighborhood stakeholder engagement, and will ultimately require approval by the Zoning Commission,” Deal said. “We are in the preliminary stages of planning the Center for Athletic Performance and will continue to work with a variety of stakeholders in determining the future location of the community garden.”

Hocking said that in recent meetings with AU Facilities Management, the University confirmed that the current space can still be used through the next academic year, but she expressed frustration about how long it took for community garden members to be in a room with all the necessary stakeholders and receive the correct information.

Students involved with the garden also felt that the community garden wasn’t considered enough in original discussions proposing the new athletic facility. In the 2021 campus plan document, the community garden is not included on the map of existing facilities or proposed changes.

“It was really frustrating because in some of the meetings, it felt like our feelings and this space being sacred to us was really overlooked and disrespected,” College of Arts and Sciences sophomore Emily Stinneford said. “A lot of it came down to money… But also, we’re paying a lot of money as students. We’re also contributing financially and this is our space just as much as it is anyone else’s.”

Deal said that the University welcomed feedback about the campus plan before it was approved.

“Prior to the Zoning Commission’s approval of the campus plan, a series of meetings took place with a variety of stakeholders, including students, at which time we welcomed feedback on the overview of the plan,” Deal said. “The campus plan is a high-level overview of 10 years of potential development projects. It does not address the specific changes of each project. That level of detail is addressed in the development phase of each individual project and that phase features extensive community engagement and opportunities for stakeholders to provide their input.”

Mastrota said that Facilities Management is learning about the project at the same time as students from the community garden are.

“I think we’re learning just as quickly as anyone about the project. I don’t think they were intentionally not included in conversations… We’re telling them everything we know. We learned a lot at the meeting on Monday just like they did,” Mastrota said in reference to a recent meeting between AU Facilities and students involved with the community garden.

Aside from complaints about lack of communication, Hocking and other members said that the University placed the burden of their construction plan on the students without any proactive indication of support.

“This has been the most stressful experience I’ve ever had at AU. Wondering, how do I organize all of these people, along with Sydney and other leaders in the garden, and figure out what to do?” Hocking said.

“The way I would describe it is not necessarily anxiety or not necessarily grief, but just kind of a dread pit in your stomach kind of feeling,” Raiano said. “Knowing that after everything we put towards the garden, it just came down to money. And that was what I felt worst about. I felt very sad knowing that a space that we really care about and that we built a community around is going to be destroyed.”

When the community garden Instagram shared a post about the news, many AU students commented on the hypocrisy of AU branding themselves as a sustainable university, yet planning to destroy a sustainable community space. Students involved with the garden agreed.

“I feel like I was lured into AU as a green school,” Hockings said. “The students are the ones that have always carried it on their shoulders to make things work. Students shouldn’t have to amend the University’s actions when the University claims to stand for green, sustainable initiatives.”

“President Burwell has literally referenced the garden in emails, letters and marketing. So it was really a stab in the back to be completely dismissed and not included in the plans when it was no longer convenient to have this here,” Stinneford said. “I think the garden was celebrated when it was convenient, and when it needed to go, it was ignored and pretended like it didn’t exist.”

Another common feeling among students involved with the garden was that the University was prioritizing the financial value of the space, rather than value measured in terms of what the space provides for students, community garden members said.

“It really does bother me that AU is only considering the monetary value of that space, when I can't even begin to describe how much that’s given me in terms of community, and in terms of hope about things that are going on, especially climate change,” Raiano said.

Stinneford feels that the University is overlooking the garden’s “endless value.” Students involved with the garden engage in much more than just gardening in their space.

“Out of any class I've taken, I've learned the most here. I mean, we do readings about indigenous garden practices, or what it means to be on stolen land,” Stinneford said. “We talk about community in gardening, we talk about sustainable farming and agricultural processes, we talk about how meditative spending time outside and the garden is. I’ve learned so much. It has so much value for our community as a whole.”

The garden was described as a safe space by several students. Spencer said she feels that the garden provides a place for those who are feeling lost at AU.

“Before our Saturday work days even started, I spent a lot of time there, just by myself, and it provided comfort to me and continued to do so as the year progressed,” Stinneford said. “Last semester was my first semester on campus. Everything was changing, everything was new, but that space just held me when I needed to be held. And I just have so much gratitude for the plants and the people.”

Moving forward, the group hopes to secure a new spot for their garden near Katzen. Spencer said there are several benefits of relocating to a new space.

“I think that we can make a step-up when we move to the Katzen space, given access to electricity, bathrooms, wheelchairs access,” Spencer said. “The space that we’re moving to will be able to do that, which is something that we haven’t had here.”

Facilities Management has expressed support for future communication and creation of a new space for the community garden.

“We have an understanding that we’re definitely going to keep the communication open,” Monstrata said. “We need to work together to design the new space after we get the location approved.”

For now, the community garden will continue to prepare for harvest in the fall at their work spaces twice a week.

“Gardening is something that can really ground you. I find it very meditative,” Stinneford said. “You’re sharing a labor of love with the environment and in return it provides something to you. Whether that be a life lesson, or food that you can eat or whether that be community and friends, it provides so much to us. I think that everyone should go and put their hands in the dirt and hangout with some plants because they really grounded me.”

Editor's note: This article has been updated to include the correct spelling of Katherine Raiano's name.