AU students rally for Ukraine on campus, around DC and abroad 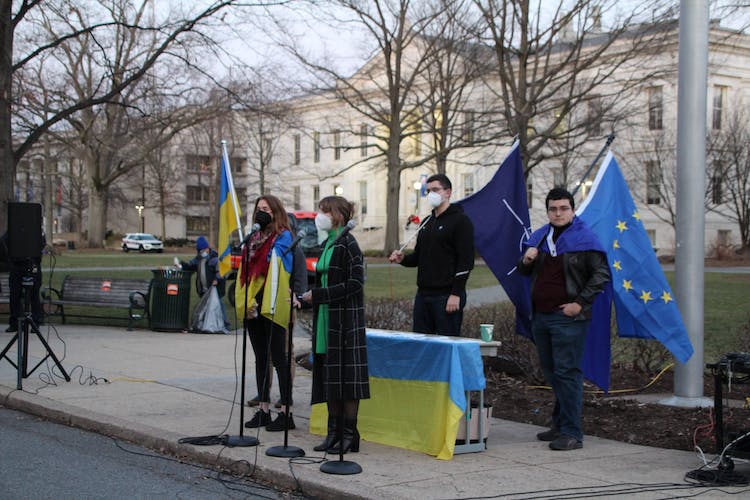 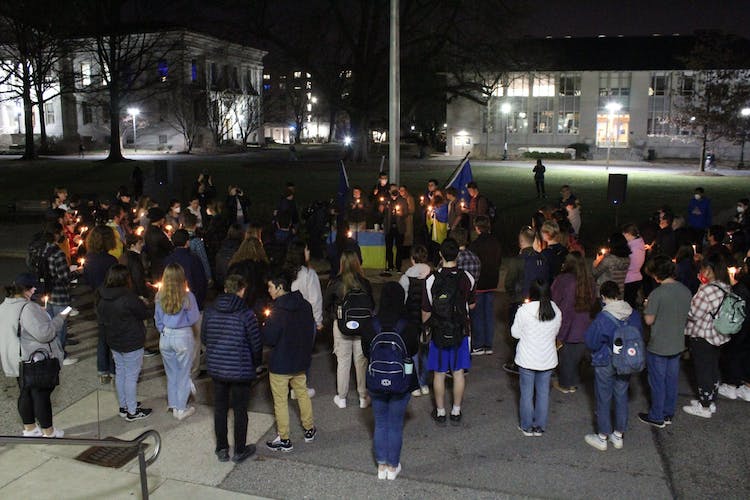 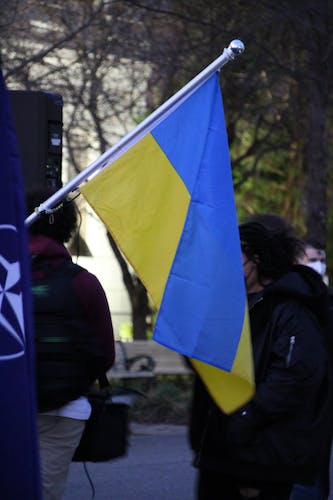 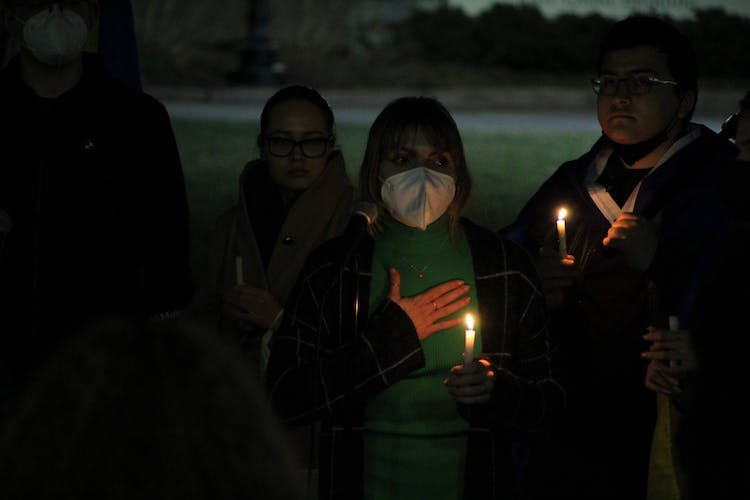 American University students congregated in front of the Mary Graydon Center Wednesday night to protest Russia’s invasion of Ukraine and spread awareness about the war.

School of Public Affairs and College of Arts and Sciences senior Katherine Boyko helped organize the rally of approximately 100 people with the intention of sharing information, signing petitions and encouraging volunteers to help Ukrainians in D.C. by translating legal documents and forms like those relating to immigration.

Boyko, who lived in Ukraine for 13 years and has family there, said the devastation she felt after hearing the news of the invasion motivated her to organize the rally with the help of CAS senior Kyra Lozynskyj and School of International Service PhD students Anastasia Perevezentseva and James Bryan.

“When you don’t receive anything from [friends and family] for days at a time, you only assume the worst,” Boyko said. “Since then, you’ve been receiving photos and videos from Ukraine of the cities that have been bombed, and the only thing you can think of is, ‘I’ve been there. I’ve looked at that zoo, I’ve walked through it, and now it’s bombed and now there are tanks going through it.’”

The demonstration illustrated growing discontent in the AU community over the administration’s lack of response to the war in Ukraine. With schools like Stanford University formally condemning the Russian attack on Ukraine, many students wondered why American University has not yet publicly expressed their support for Ukraine and its people.

Elizabeth Deal, American University’s assistant vice president for community and internal communication, wrote in an email to The Eagle that outreach has taken place with the international students from Ukraine and Russia.

According to emails obtained by The Eagle, the International Student and Scholar Services hosted a closed meeting last week for students with counseling center faculty, associate deans and Reverend Bryant Oskvig, the Interim University Chaplain.

Daria Morris, a Ukrainian freshman in the SPA, said she wasn’t invited to the meeting because she has a U.S. passport and the event was only offered to international students.

Boyko, on the other hand, said her professors have been accommodating with assignment extensions and excusals from class.

As Ukrainian music filled the air, students lined up to sign a petition for NATO to close the airspace over Ukraine and volunteer to help with the efforts of @stayinformed.ukraine, an Instagram page dedicated to combating misinformation about the war and spreading awareness. Rev. Oskvig brought the rally attendees together for an interfaith prayer as the sky grew darker.

“We pray tonight for the people of Ukraine, for their courage, for their fortitude and for the sense that there are people all over the world holding them close in their hearts,” Oskvig said.

The AU rally comes after several similar demonstrations around D.C. over the last 10 days. Within hours of the initial invasion on Feb. 24, demonstrators, many of them Ukrainian, gathered outside the Russian embassy waving Ukrainian flags and calling for the invasion to stop.

Protesters have also gathered repeatedly outside the White House, chanting and holding signs to demand that the Biden administration impose tougher sanctions on Russian President Vladimir Putin and other Russian institutions.

Some demonstrators called for the United States to increase the flow of military supplies it’s already providing to Ukraine, a step that many European nations have taken in recent days.

For AU students studying abroad in Eastern Europe, protests over the conflict have been just one part of what they describe as an eerie and disconcerting experience since the invasion began.

“It’s been such a somber, sad mood,” said Alexandra Rainis, a junior in the School of Communication who is studying abroad in Prague. Many Czech people, she said, still vividly remember when Russia invaded their country in 1968. “And so this is bringing back a lot of memories for them,” she said.

At pro-Ukraine demonstrations that she’s witnessed both in Prague and Budapest, Rainis said thousands of people gather and mostly stand quietly in solidarity, with just an occasional chant.

She differentiated between Ukraine demonstrations and her experience attending Black Lives Matter protests in the U.S., which she described as having “a lot more energy and chanting and yelling.”

“It’s a very different experience to just stand in silence,” Rainis said of the protests in Prague. “It’s very quiet.”

Gaby Sosa, a sophomore in SOC who is also studying abroad in Prague, said musicians have been a big part of the protests she’s seen, performing at demonstrations and offering their support for Ukraine between songs.

But she’s experienced a sense of dread hanging over the city too, she said, recalling a moment when she asked the man at the front desk of her Czech school how he was doing.

“He started speaking about Russia, and how gas prices are spiking up and how things are just gonna start getting worse,” she said. “You could see the concern. You feel the vibe is different.”

Fears of Russian aggression further into Eastern Europe have made what was supposed to be an exciting study-abroad experience into something far more stressful.

“We didn't think that this was going to affect us because we're students, and we’re very irrelevant to everything that's going on,” Sosa said. “But it seems like even on a small scale, it's starting to influence us.”

Column: An overview of the MLB’s free agency

Column: For Natalie Rogers, finding her seat at the table started with action