The race is on this spring for American University students to put their waste in the proper bin as the University participates in The Campus Race to Zero Waste: an eight-week competition to track and reduce waste on campus.

A program of the National Wildlife Federation, the Campus Race to Zero Waste began Jan. 30 and will continue through April. The race uses friendly competition to measure, track and ultimately reduce waste on college campuses across America.

Tacy Lambiase, sustainability manager for the Office of Sustainability, said that the office has multiple goals for this year’s race.

“The main goal for this competition is to educate our campus community about ways they can correctly sort and reduce their waste,” Lambiase said. “We’re hoping to see a trend over these eight weeks of less waste going to landfills and more waste going to compost and recycling.”

Each time a community member throws away their trash, they are participating in the race.

“The Campus Race to Zero Waste really applies to everyone on campus,” Lambiase said. “Everyone in our community – including students, faculty, staff and visitors – are participating in the competition, whether they know it or not.”

Lambiase also encourages the community to reduce their waste by carrying around reusable items and correctly disposing of unwanted dorm items.

“Waste is one of those areas of sustainability that really requires a lot of teamwork,” Lambiase said. “It really takes everyone being involved, aware and educated about how to manage waste if we want our campus to really be successful in terms of minimizing landfill waste.”

Campus waste totals are published weekly on the Office of Sustainability website, to keep the community updated on the University’s progress. Jesse Cross, the AU Zero Waste Manager, leads the data collection and reporting system for the race.

Campus waste data is collected nationwide each week and then ranked using four categories. The “diversion” category accounts for the amount of waste diverted from landfills to compose and recycle. “Food organics” refers to any organic materials handled alongside total food waste reported. “Zero waste” accounts for recyclables, food organics, trash weights and materials for reuse. “Per capita'' accounts for the weight of all recyclables.

For the 2022 competition, AU is not yet included in the weekly data published by the Campus Race website.

“We’re still very much in the draft of what that data looks like,” Cross said. “We don’t get included until we confirm that the data is correct.”

The first two weeks of the semester being virtual largely contributed to this delay. Madeline Krentz, an undergraduate intern with the Office of Sustainability, has been collaborating with the Zero Waste office to track waste data since the beginning of the year.

“It's been a little difficult to track waste this year, because we have two pre-competition weeks,” Krentz said. The pre-competition weeks are tracked by the Campus Race to Zero Waste before the competition begins to get a baseline of data. “Those were the weeks that no one was on campus, so they were really low, so numbers have been actually going up.”

According to Krentz, if bins are contaminated, they cannot be counted for compost or recycling in the race.

“There’s a 95 percent contamination rate for compost and recycling,” Krentz said. “Take the extra two seconds to look at the bin and make sure it goes in the correct place, and if you don’t know, put it in the landfill.”

Gabby Li, a graduate intern with the Zero Waste Office, has been working on communication and outreach for the Campus Race to Zero Waste. Li focuses on research to share with the community in order to spread the word about the competition. This year, she has been making graphics, and sharing behind the scene photos from the competition.

“When you see those working on these projects, you see that so many people actually do care about why we’re doing this,” Li said. “When you understand that, you’re more likely to want to educate yourself in the waste sorting department.”

Both Li and Krentz said that the University’s culture lends itself to sustainability, particularly because of the Offices of Sustainability and Zero Waste. They hope that this will help the University succeed in the campus race.

“I think it definitely helps that we are carbon neutral,” Li said. “Through the language of sharing these messages, we attract people who are interested in this area. That kind of snowballs to more people who care about sustainability and the environment.”

Throughout the race, sustainability leaders also hope that students will begin to learn about how their actions contribute to a larger cause.

Ultimately, the Campus Race to Zero Waste is an all hands on deck project, with every community member having a chance to participate.

The winner of the Campus Race to Zero Waste competition will be announced April 28 and will include a national winner and a winner of each conference.

“Everyone has something to contribute to this competition,” Lambiase said. “No action is too small.” 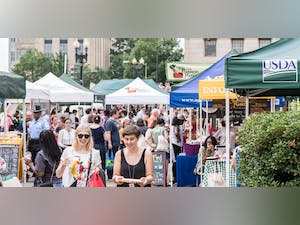