A few months ago, he was a student-athlete. In July, the senior men’s basketball player became the latest American University athlete to profit off their name, image and likeness (NIL).

Earlier this month, Alexander shared a picture via Instagram of himself sitting at a table while holding a one-dollar bill with a container of Six Star Pro Nutrition’s protein powder.

“This dollar, representing a portion of my first #NIL deal, shows that @SixStarProNutrition is committed to college athletes all year long,” Alexander wrote. “They are the one and only Athlete’s Choice for proteins, pre-workouts, aminos, and more.”

Alexander added that his mother was really excited for him when he received the contract, and the two of them shared the moment together.

After posting the announcement on Instagram, support and congratulations poured in.

“It’s definitely a blessing,” Alexander said. “To be fortunate enough to be in this position and have a company back me, and me being able to promote their product is what makes it really exciting to me.”

The contract Alexander found himself looking at in July came from Six Star Pro Nutrition, a company known for its workout supplements.

“When they first emailed me about the contract, I was really excited,” Alexander said. “Just knowing Six Star Pro Nutrition and what they’re about, what they do, and all the other athletes they have with NIL and even T.J. Watt in the NFL. Being a part of that and knowing that I’m with those top-tier athletes was really exciting for me.”

Alexander added that there are benefits and drawbacks to NIL endorsements, yet it was a long time coming for athletes to be able to profit off their name, image and likeness.

On July 1, 2021, the NCAA adopted policies that allow Division I, II and III student-athletes the ability to profit off their name, image and likeness (NIL), and the new legislation allows college athletes to make money off their NIL contracts.

“I think this is a really big, big step in the right direction but the next steps in the process will definitely be very difficult as well,” Alexander said.

Last season, Alexander transformed into one of AU’s best two-way players, averaging 9.6 points and 4.6 rebounds per game. This season, he hopes to continue getting better on and off the court, and he said that it might lead to more endorsement deals.

Alexander is not the only AU athlete taking advantage of the initiative. Fellow American University student-athlete Bryn Underwood announced a NIL partnership with Liquid IV, an electrolyte drink mix company.

The sophomore field hockey goalie, who was named the Patriot League Rookie of the Year last season, was the first American University athlete to sign a NIL endorsement.

“I’ve really been excited about the companies that have reached out and provided me with opportunities,” Underwood said. “It’s just a fun, surprising moment that’s now part of my day-to-day.”

According to American University’s associate athletic director Andrew Smith, 10 other AU athletes have taken the initiative.

“They’re smart, they’re intelligent, they understand what they can and can’t do, and I think they’ll be creative on their own,” Smith said. “They’re empowered to do what they want and should be empowered because they’re all incredibly talented and can come up with creative ways to make money the same way a non-athlete would.”

For Alexander, the new rules mean a new kind of freedom. “It’s our name, our image, and our likeness,” he said. “For me, it really wasn’t even too much about the money. It was being able to stand for something I believe in.” 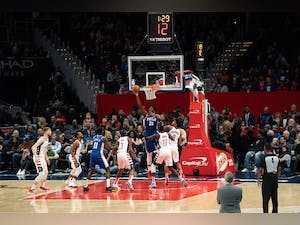