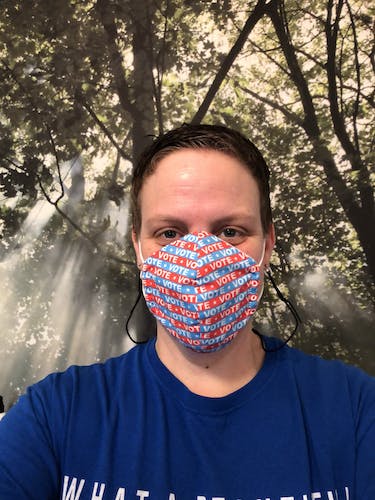 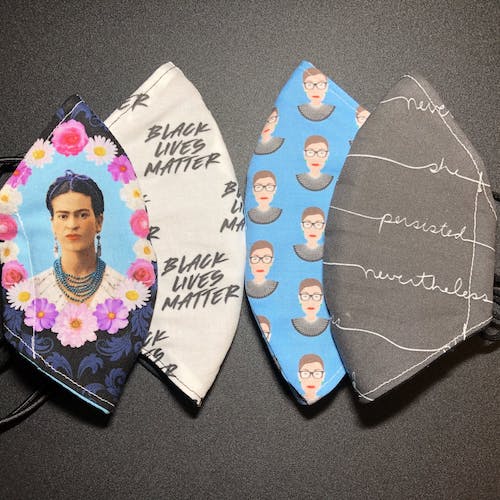 American University professor Jane Palmer said she had always been looking for a hobby. When she was a kid, she learned to sew but then took a long hiatus from the craft before returning to it within the last few years. She took sewing classes with some friends in Adams Morgan, making pillowcases and curtains to dust off her skills. After Palmer had her son, she sewed less again, until the pandemic.

“I was one of the many that was like, ‘Alright, let me find some T-shirts, let me find some shoelaces. I'm going to pull up some YouTube videos and make some masks for my family,’” said Palmer, the director of the Community-Based Research Scholars program in the School of Public Affairs.

She started making masks for her friends, loved ones and those in her life who did not have the privilege of quarantining, including her pediatricians and daycare providers. Around the same time, she realized that there seemed to be a lack of social justice-oriented masks. So she purchased a bunch of fabrics with feminist and Black Lives Matter themes until she found herself in what she called a “rabbit hole of cool fabric.”

Palmer opened her Etsy shop called SewJusticeSewPeace at the end of July after she said her friends encouraged her to, and while she had more than enough fabric. She sells masks for children through adults with and without social justice themes. She has sold almost 400 masks.

“I thought that I'd sell, like, a handful a week and just periodically be making some masks,” Palmer said. “But, I guess there really was a gap in the availability of social justice-oriented masks.”

After the death of Supreme Court Justice Ruth Bader Ginsburg at the end of September, Palmer received an influx of orders for RBG masks. Currently, her RBG-related masks have been her most popular orders. Other popular fabrics include ones that say, “nevertheless she persisted,” “vote” and “BLM.”

All of the sales from her BLM products are donated to a youth-led action research project based in the Petworth neighborhood. Palmer said she did this because she does not want to profit off of the commercialization of the BLM movement.

In an email, Palmer also said she held a fundraiser when she first opened her Etsy shop to buy masks for clients of Thrive DC in Columbia Heights, an organization that works with people experiencing homelessness. She raised enough money to send the organization 100 masks, she said.

The increase in orders made Palmer hire her first employee, the daughter of another AU professor who lives on her block. She cuts fabric for Palmer since that process can take a long time. With a stack of precut fabric, Palmer can focus on assembling masks.

Making a mask can take up to 45 minutes, especially when Palmer adds in filter pockets and nose wires. All of Palmer’s masks are customizable, so customers can choose a filter pocket or a nose wire, and all her masks have ear adjusters. In promoting public health, she said she wants her masks to “be cute, have a message and fit your face.”

“I’ve been listening to audiobooks or watching Netflix while I do it,” Palmer said. “Those are things I just hadn't done in years because I had just worked all the time, or I always felt this pressure to be on my email, and with the pandemic and just life in general, having a three-year-old. At the end of the day, I'm not going to check my email at 10 o'clock at night, I'm going to be sewing something beautiful and listening to a beautiful audiobook.”

Palmer thinks finding a creative outlet is crucial as a professor, where she is a role model for students. She said she wants to show that you can have fun doing something you love while still professionally succeeding.

Palmer is still figuring out her Etsy shop’s future. She could see herself selling other products, especially since she already makes custom orders for her friends, but only if there was a clear public interest for other products. Otherwise, she said she would keep sewing until it’s the last thing she wants to do at night or once there is no longer a need for masks.

“I would only sell something that's helping people,” Palmer said. “And so, as long as people need help, I'm going to make them.”