Dozens of swimmers on American University’s men’s team have come and gone during the past decade, competing in 21 different races across hundreds of heats and thousands of hours in the Frailey Pool. After the 2010 season wrapped up, only one has found a new record-holder: Scott Callander.

During the qualifying rounds of the 2018 Patriot League Swimming and Diving Championships, Callander channeled his inner strength to overtake a two-decade-old time in the 100 m butterfly. The junior finished the race in just 48.49 seconds, breaking the 48.77-mark that Johan Setterberg, then a sophomore, held since 1988.

Callander just missed a chance to qualify for the NCAA Nationals, which would’ve been earned by a 48.29 swim.

Almost exactly a year later, Callander recorded an even faster time in the 100 fly during the Patriot League Championships, besting the 2018’s race by .01 seconds.

Callander had an illustrious AU career, notching a spot on AU’s top-16 times in the 50 freestyle, 200 fly and three different relays: the 200 and 400 medleys and the 200 freestyle.

AU has had talented, Olympic-level swimmers in its past on its men’s and women’s side. But in the 2010s, no one race was as impressive as Callander’s great 2018 run. That is, other than his 2019 race of the same ilk.

Number 5: AU women’s basketball advances to the Big Dance for the first time - 2015

The 2014-15 AU women’s basketball team (24-9, 16-2 PL) was historically dominant. This iteration of the Eagles finished first in the conference and ended the regular season on a nine-game winning streak.

In the conference tournament, AU made quick work of No. 8 Lafayette in the quarterfinals and No. 5 Navy in the semifinals. After defeating the Midshipmen, the Eagles advanced to the conference championship game to face Lehigh University.

With a win, they would cement their place in AU history. With a loss, it would be back to the drawing board for second-year head coach Megan Gebbia. They weren't going to fall this time, defeating Lehigh in a resounding 66-50 victory.

Until 2015, the AU women’s basketball team had never made an NCAA tournament appearance. That all changed after the win, as the team secured an automatic bid to the NCAA tournament. On March 15, 2015 — also known as Selection Sunday — the Eagles would learn their first-round opponent.

AU women’s basketball players sat with nervous excitement in The Tavern, waiting alongside their fans and coaches to learn their opponent in the Big Dance. After 19 brutal minutes, ESPN announced that the Eagles had earned the No. 14 seed, a trip to Iowa City and a chance to take on the third-seeded University of Iowa Hawkeyes.

Senior guard Jen Dumiak led the Eagles in scoring, averaging 17 points per game while shooting 52 percent from the field, 41 percent from three and 92 percent at the free-throw line.

Two other players on the Eagles roster, junior forward Michelle Holmes, and senior forward Arron Zimmerman, averaged over 10 points per game for the team.

Gebbia was excited to see how her team would match up against one of the best teams in the country.

“[I’m] just elated that we get to play a terrific team,” Gebbia told The Eagle in 2015. “They’re difficult to play at home, they have a great starting five [and] all five can score, so it will be a challenge.”

When the two teams did eventually match up in the first round, the game was competitive. Even though AU fought valiantly, their inexperience on the biggest stage cost them.

The Eagles lost to Iowa 75-67. Even in defeat, this history-making season is still enough to secure the fifth spot on AU Athletics' top 10 moments of the decade. 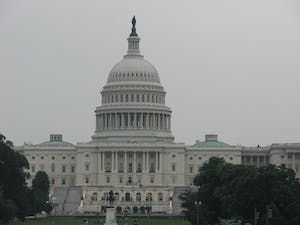