Women’s soccer has yet to win a conference game

The AU women’s soccer team fell to the Loyola Greyhounds 3-1 on Thursday in Baltimore. The result earned the Eagles (4-6-1, 0-2-1 PL) their second conference loss of the season.

With the loss, the Eagles currently sit at the bottom of the Patriot League table.

The match opened with fairly even play, and both teams recorded shots early. An AU foul occurred inside their own penalty box in the 14th minute, which resulted in a Loyola penalty kick. Loyola’s Hannah Hoefs took the penalty kick and faced AU senior goalkeeper Amy Krotine. Hoefs shot was hammered to the left and went through Krotine’s hands for Loyola’s first goal of the contest.

“We needed more heart,” said AU’s head coach Anabel Hering. “We kept racking our brains asking ourselves, ‘Should we be doing something different?,’ but we really just didn’t show up.”

Loyola mounted another offensive attack minutes after their first goal. Sarah Bayer released a low shot that bounced off the left goal post and into AU’s goal.

Despite multiple formation changes, AU’s struggles on defense continued. With 27 minutes remaining in the first half, a Loyola crosser by Kaleigh Gallagher deep in AU territory bounced off AU’s Natalie Oliver, resulting in an own goal. The own goal made the score 3-0 in favor of the Greyhounds.

It wasn’t until the final minute of the first half that AU recorded its first shot on goal. Sophomore Emily Smith’s shot was perfectly placed above Loyola’s goalkeeper Paige Sim’s hands. Smith’s goal was her second in the past two games and her second of the season.

“She had a bit of a slower start to the season but she’s definitely getting more game fit now,” Hering said. “She has a good calming presence on the ball.”

AU’s offensive attack in the second half tried to build off the momentum from Smith’s goal, putting six shots up, none of which found the net. Although the Eagles failed to score the two goals they needed to send the contest into overtime, their offensive play in the second half was better than the first.

“We definitely controlled the play better in the second half, finding ways to penetrate through,” said Hering. “We just needed to be more dangerous.”

AU tied with Patriot League opponent Holy Cross on Sunday at home. The Eagles will be back at Reeves Field on Wednesday to play UMBC, hoping for their first conference win of the season. 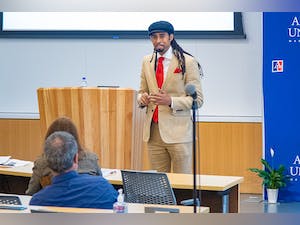