Are the payoffs from AU’s construction projects worth the costs?

Recent construction efforts on campus aim to cut carbon emissions and create more resources for students, administrators say, but the projects have come with some distinct challenges, including a lack of aesthetic appeal to prospective students and issues with accessibility.

Last fall, the University began construction on the expanse of grass beside the McKinley building, known as the Beach, where they replaced outdated steam pipes with energy-saving Low Temperature Hot Water (LTHW) piping. This was the beginning of a $25 million heating renovation plan as well as the first steps taken to build the new Hall of Science.

Replacing AU’s roughly 50-year-old steam piping system requires the earth covering those pipes to be removed. The scope of the project is massive: every building on campus must be connected to the new system, according to David Dower, assistant vice president for project management for AU.

The next stage of pipe replacements is scheduled to begin in mid-April of next year, while the full project is anticipated to be complete by late 2019, Dower said.

“You’re going to see that fence line move around the north side of campus during the next year,” Dower said in reference to the fences around the torn-up pathways on the quad. “They’re taking it in phasing.”

While the LTHW replacement is costly, it will save AU money in the long-run by reducing the cost of heating buildings with a much more efficient system, Dower added.

The project will reduce electricity consumption by 27 percent, save 4.3 million gallons of water, and increase the efficiency of the heating systems by 40 percent. This will minimize the University’s carbon footprint by nearly 50 percent and will save the university around $1.5 million per year in energy costs, said Vincent Harkins, assistant vice president of facilities management.

The second major project on campus is the Hall of Science, set to house AU’s biology, environmental science, chemistry and neuroscience departments. Anticipated to be completed in 2020, the new building will be a massive upgrade for the science departments in the College of Arts and Sciences (CAS), whose current facilities, Dower said, are probably worse “than your high school lab’s.”

“There has been significant increase in the sciences both in research and in teaching,” Dower said. “It was determined early on that Beeghly could not be renovated and expanded. This building will consolidate faculty in Hurst, Asbury and Beeghly into one building.”

The plan for improved science resources was included in the University’s 2011 Campus Plan, though at the time the University intended to add several floors to Beeghly.

One of the University’s hopes is that the new building will help to secure more grants and research funding for the sciences at AU. These grants will also help pay for the building, with a recent donation by trustee Gary Abramson providing $5 million for the construction.

The Hall of Science is set to cost $90 million, including the design, construction and furnishing. Upon completion, it is expected to receive the Leadership in Energy and Environmental Design (LEED) Gold certification, a globally recognized symbol of sustainability achievement.

The building is not designed around departments, but rather around the core facilities: the labs. Most of these will be wet-labs, where advanced research and teaching in biology and chemistry can be done, Dower said

As of Oct. 30, excavation on the site is complete and foundation work for the building’s wall and columns has started, according to a continually-updated AU website on the project.

From now until next April, the campus community should expect to see lots of cement trucks coming through the back of AU to the Hall of Science, Dower said. The concrete structure is expected to “top-out,” or reach its maximum height, in April, according to Dower. From there, only interior and furnishings will need to be added. 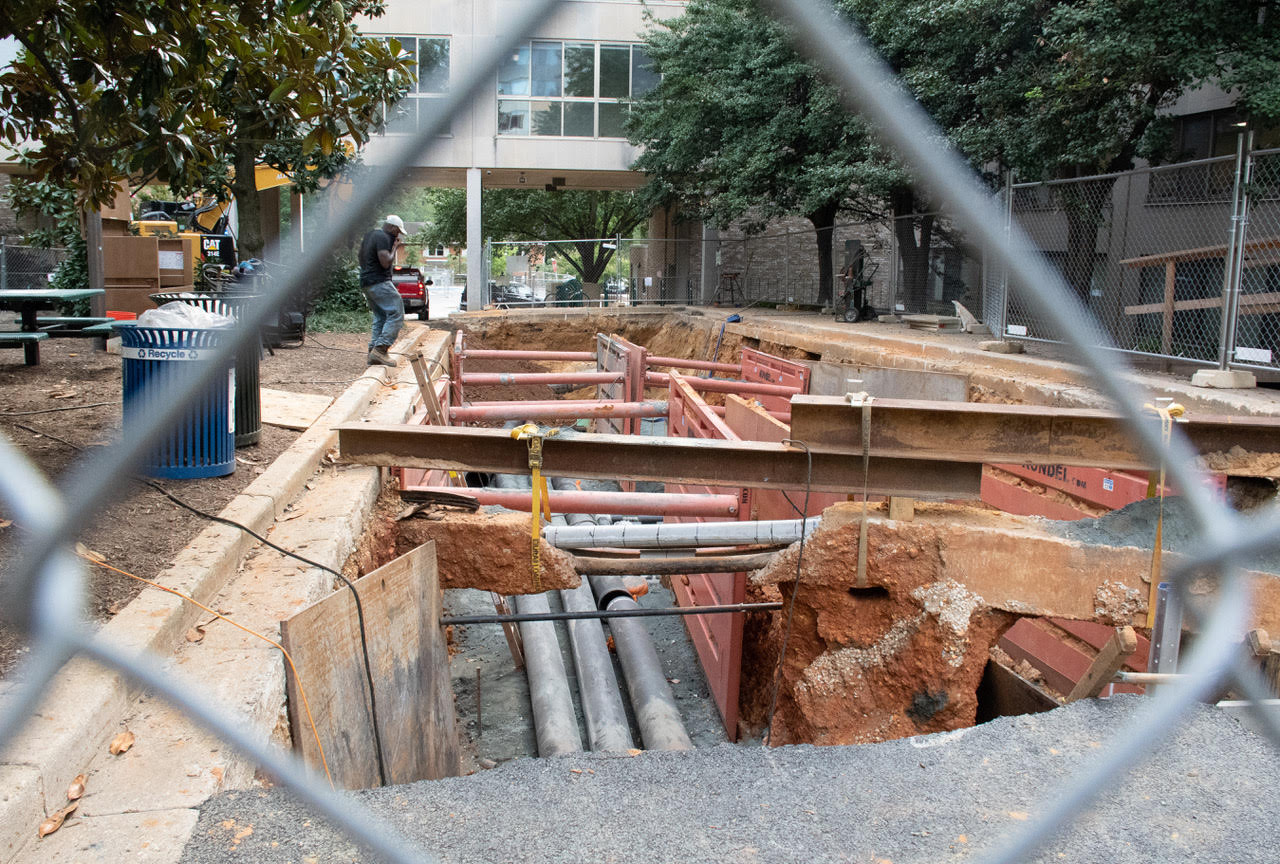 Exposed pipes and construction blocking off the route from the bus stop to Anderson Hall. ALEJANDRO IRIZARRY/THE EAGLE

Thanks to the projects, construction is a constant in the lives of AU’s students and employees and has touched nearly every aspect of university life.

“There have been various alerts and accidents, you know, gas leaks,” Sarah Dumont, executive director of AU Abroad, said. “There was a sewage leak, there was a day when there was no water in the building,” she said.

AU Abroad’s office is located in the Sports Center Annex adjacent to the Hall of Science construction. Since the start of the fall semester, AU Abroad staff has been forced to work from home twice due to construction-related issues with the building.

“We’ve been a building site ever since they started with the SIS building years ago, and then there was the SOC building, then the dorms and now this,” Dumont said. “You sort of feel like this is never ending. I’m used to the little beeps and the sound of trucks; it doesn’t even register in my brain anymore.”

Additionally, the presence of heavy machinery and construction waste temporarily blocked accessibility to the annex. Dumont said that Harkins and his team have been very responsive to her requests to address issues with accessing her office.

“Regretfully, there literally is no other way to do this,” said Dower, in reference to the LTHW project. “Although I suspect there are many people on campus that don’t feel this way, they’re desperately trying to minimize the impact to you folks on campus.”

How AU Ambassadors has adjusted the pitch to prospective students

Tyler Sanders, a junior and a tour coordinator for AU Ambassadors, explained the challenges that come with maneuvering construction with prospective students.

Sanders said that at the beginning of summer, Facilities Management sent himself and his co-tour leader, Loie Faulkner, a colored map of where all the construction would be and when, allowing them to plan out this year’s route and possible changes that would need to be made throughout the year while keeping the tour as disability-accessible as possible.

Despite this, the prominence of construction on the quad and around freshmen dorms makes it impossible to avoid completely. Sanders uses this opportunity to discuss AU’s efforts towards carbon neutrality.

“I really appreciated after the first couple of weeks when AU put up little green sustainability signs which advertise the 40 percent increase in efficiency,” Sanders said. “That’s huge for us as we explain to parents that this is something that is good for the school.”

Sanders said he stresses the importance of being open with parents and making sure they know that it is a two-year project, which will move to the far side of the quad and will be part of their child’s experience if they come to AU. 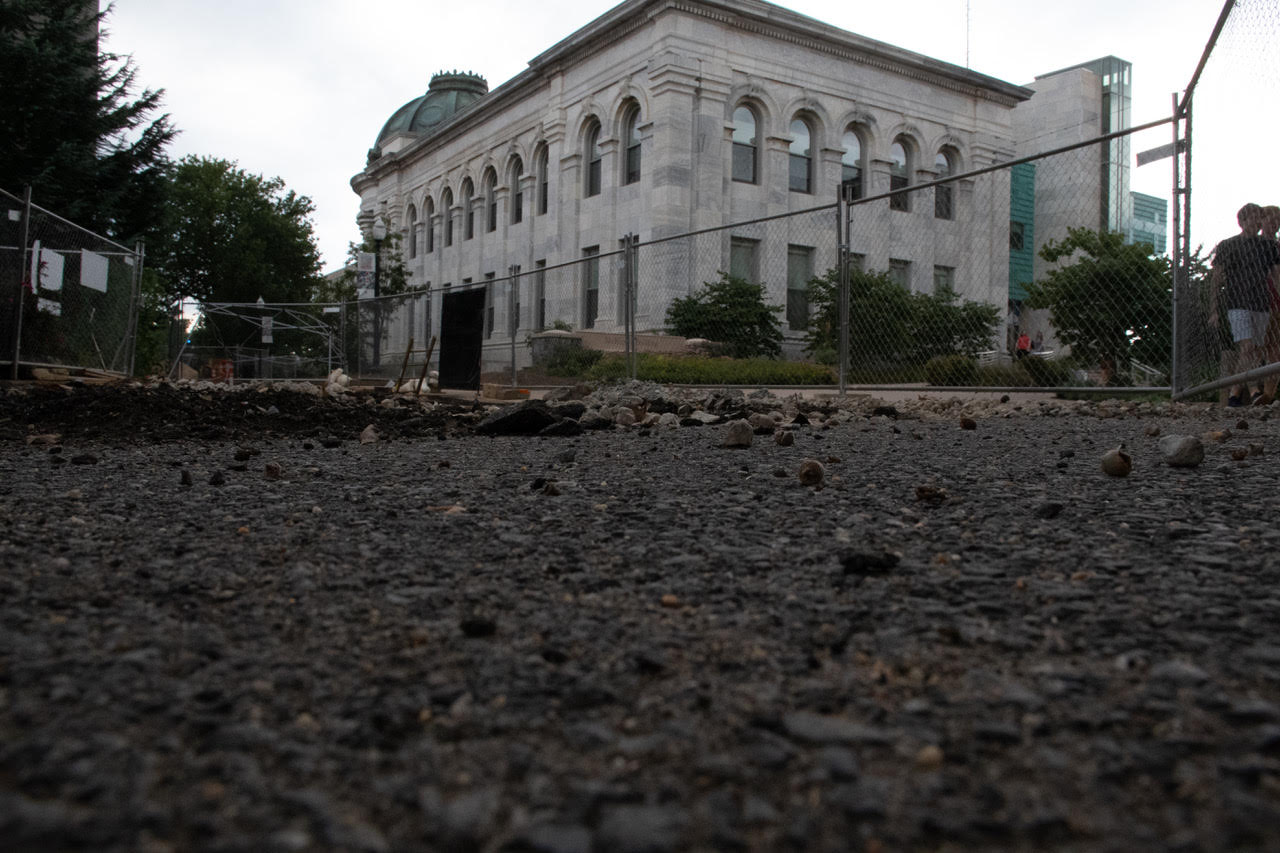 Inside fenced off construction next to Bender library, McKinley in the background. ALEJANDRO IRIZARRY/THE EAGLE

The University has also made adjustments to campus buildings and pathways to make them more accessible for people with physical disabilities. Dower said administrators spent this past summer working to add accessible features around campus.

“We completed an accessibility assessment on all the buildings about three years ago, so we know where all the issues are and we’ve been systematically going about trying to take them off the list,” Dower said.

Some of those changes included adding two locations to the upper portion of the amphitheater where someone in a wheelchair can park. Workers also added a ramp to the stage so that people in wheelchairs can access it.

While making certain minor accessibility improvements over the summer, AU also started the LTHW project, which has affected access around campus dramatically. Simple fixes like the steel plates outside Bender Library can help maintain accessibility to areas under construction, according to Dower.

However, if they cause an unreasonable inconvenience to or stigmatization of people with disabilities, the temporary fixes and re-routes implemented may be deemed unacceptable under the law, according to Robert Dinerstein, an AU professor and director of the Disability Rights Law Clinic at the Washington College of Law.

The main problems faced by the both the University and its students and faculty during long periods of heavy construction are those caused to people with mobility-related disabilities, Dinerstein said.

“Normally you have to provide either equal access through the same mechanism, so through the same doorways and those kind of things, or if that’s not feasible and it’s not new construction, some reasonable alternative,” Dinerstein said. “So that in the end, the result is that people have as equal access as they can under the circumstances.”

Rachel Abraham, a sophomore majoring in CLEG, has pulmonary hypertension, a condition where the blood vessels in her lungs are too small. The condition makes physical activity more difficult because it takes longer to oxygenate her body.

Abraham said that because of how much construction is occurring at the same time, it takes her double the amount of time it usually takes her to get to class because she has to accommodate for different and sometimes more strenuous routes, making her late to class.

Dinerstein said that oftentimes, ensuring adequate accessibility is as simple as having some forethought about how all groups of people within the community might be affected by construction, and ideally including those with disabilities in the planning process. 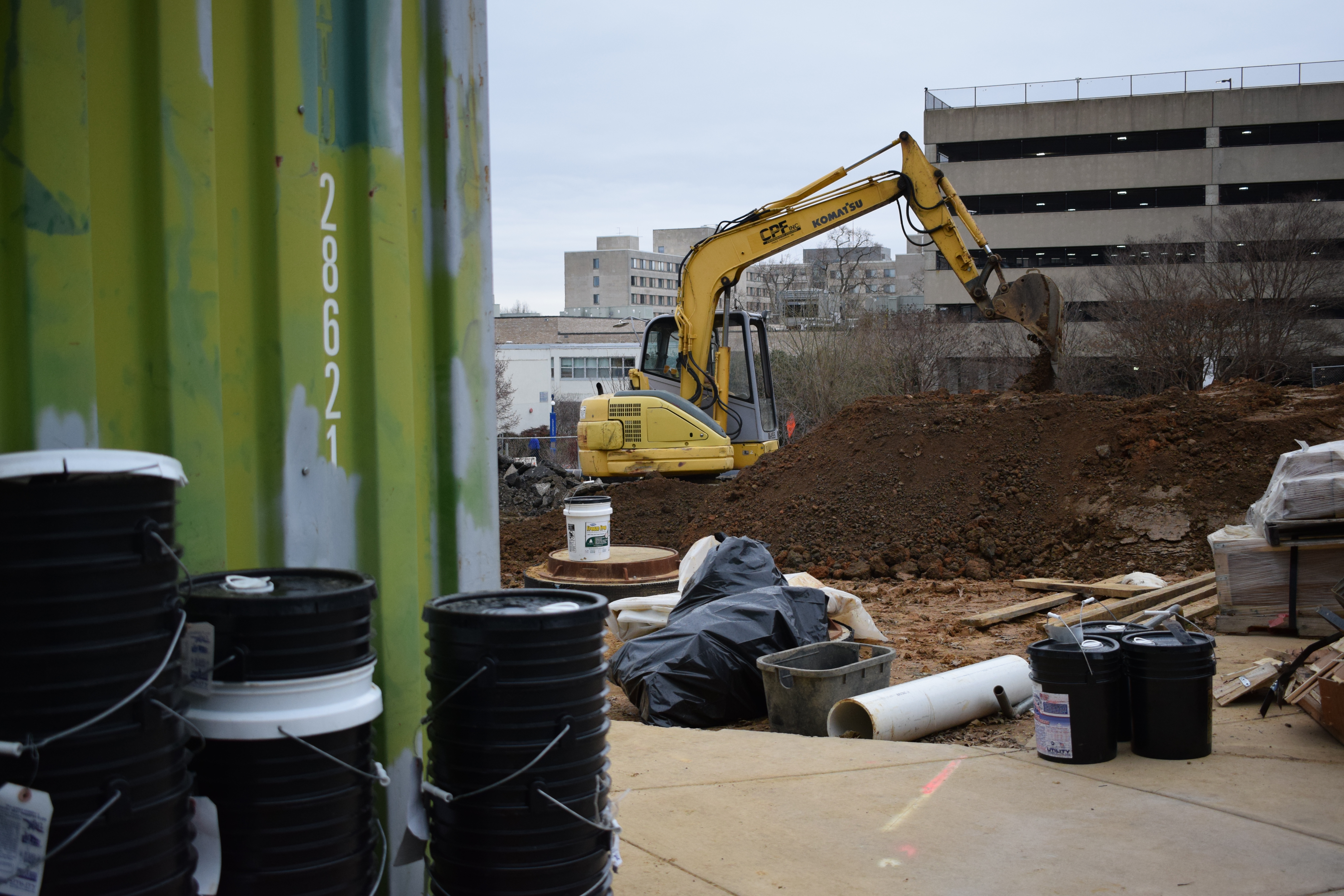 Construction near the McKinley building and Anderson-Letts Halls, pictured in February, will continue through at least 2020.  SASHA JONES/THE EAGLE

Rebekah Ginsburg, a senior in the School of International Service, has a condition called Ankylosing Spondylitis, a type of arthritis that affects the spine and major joints and causes mobility problems and chronic pain.

She said that someone who needs to use a handicap-accessible ramp to the bus stop outside the south campus dorms would have to walk all the way in front of the library and back towards the health center because construction has blocked off the ramp on the curb that would take you straight to the bus.

“Awareness with trucks parked over cross walks and ramps is key,” Ginsburg said. “That’s something that’s super easy to fix and would be easy to not have a problem in the first place. It’s so easy to move your truck five feet forward or backward and not park over the only accessible crossing.”

But Abraham and Ginsburg expressed a different sentiment. They were both frustrated that making older buildings more accessible to those with limited mobility wasn’t prioritized over the current construction projects, since it is a quicker and easier fix than waiting for a new building to be completed.

“I had office hours at Hurst last semester and [my professor] was on the second floor, and I told him, ‘I want to meet with you and come to office hours, but I don’t have the physical capacity to get there,’” Abraham said. “It was just one of those things where I felt guilty for having my condition and that’s not something that should happen.”

Dower recognizes the current situation is not ideal, and said that administration still plans to retrofit Hurst and EQB with a Mary Graydon Center-style ramp on the front after the Hall of Science is completed. Additionally, ramps and elevators will be improved in older buildings like Asbury and Beeghly.

Putting elevators in these older buildings requires a reprogramming of the whole building, Dower said. While there are plans to do this, it was not feasible during the hot water project, he said.

“The hot water project was coming through and you couldn’t get the cart before the horse,” Dower said.

A version of this article originally appeared in The Eagle's November 2018 print edition.