A glimpse into Pride fashion

Over 40,000 people clad in rainbow arrived at the New York Pride parade

On Sunday, June 24, thousands of people gathered in the streets of New York in their own garb to celebrate Pride Month, held in the month of June in honor of the Stonewall riots of 1969. Though Pride Month came to a close nearly a month ago, the fashion on display at New York’s pride parade is worth celebrating at any time of the year.

These individuals used their fashion to advocate for equality of all sexualities and genders at the pride parade. From strutting in full drag to crafting rainbow flags into T-shirts, each outfit at the parade showed support for the LGBTQ community in a variety of ways. 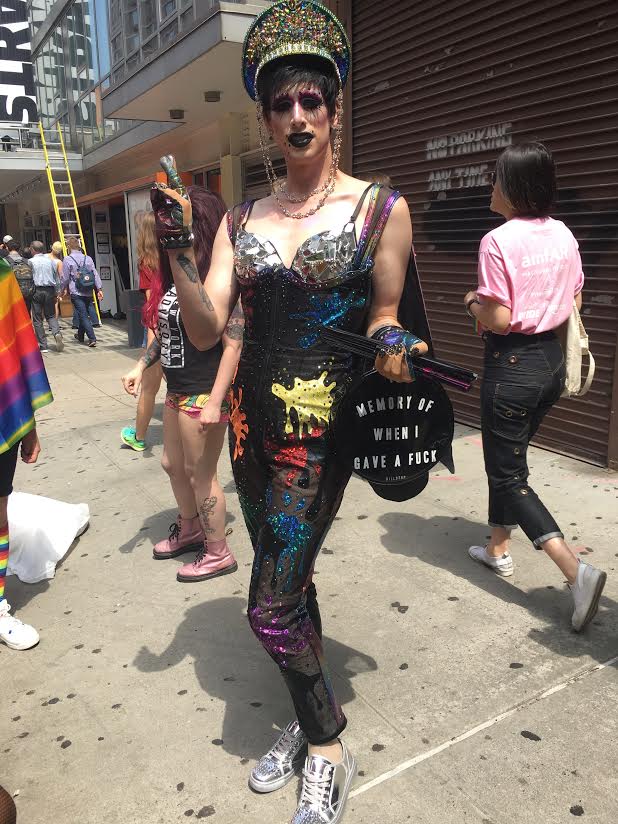 In a tight leather bodysuit and a full face of makeup, this Drag Queen took to the streets with attitude. Although his outfit and makeup are mostly comprised of dark colors and black, the splashes of color pay ode to the rainbow flag. By cross-dressing, he celebrates the LGBTQ community’s love for shameless self expression. Cross-dressing is an important element in LGBTQ fashion that allows for people to embrace the fluidity of gender, and it was very common at pride parades. 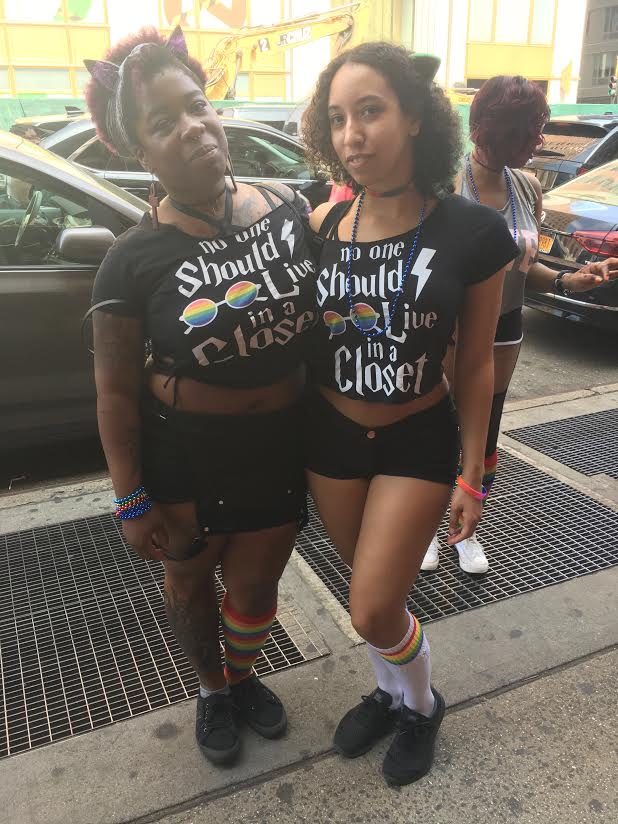 This pair of friends chose simpler looks, with a clever T-shirt that incorporates their own pride symbols. These shirts say, “No one should live in a closet,” referencing the Harry Potter book series. Phrases relating popular culture to pride symbols were very common at the pride parade. By communicating pride or support for the LGBTQ community with pop-culture references, the message becomes broader and relatable to more people who see them. These shirts are simple, but they also relay a key message of Pride: everyone should be able to be proud and embracing of their sexuality. 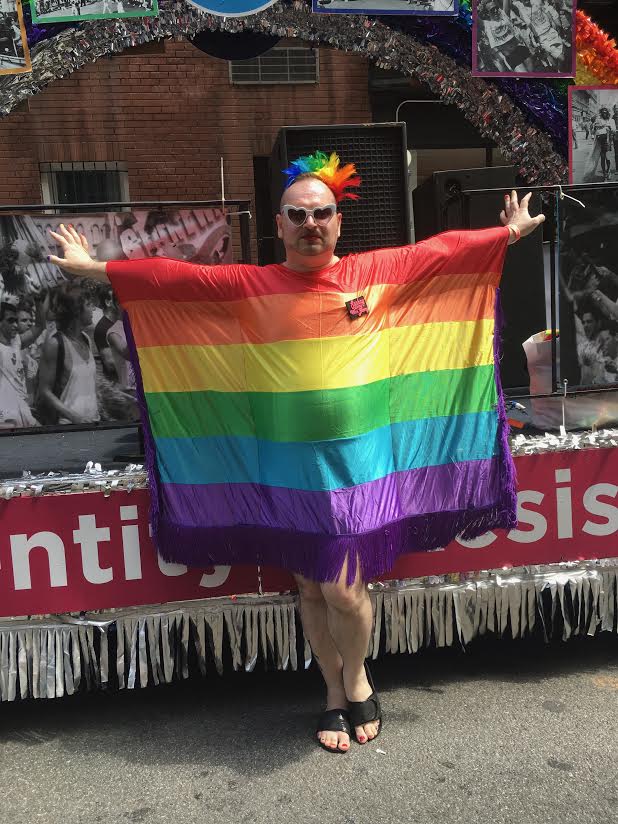 The rainbow of the pride flag became an outfit staple for the many that took to the streets. The flag could be seen in shirts, capes and knee-high socks. This enthusiastic pride-goer, however, wore it as the flag itself. His look is simple, with few accessories and embellishments, but it is extravagant at the same time. His embodiment of the flag symbolizes his acceptance of his identity and his enthusiasm in celebrating it alongside other members of the LGBTQ community. 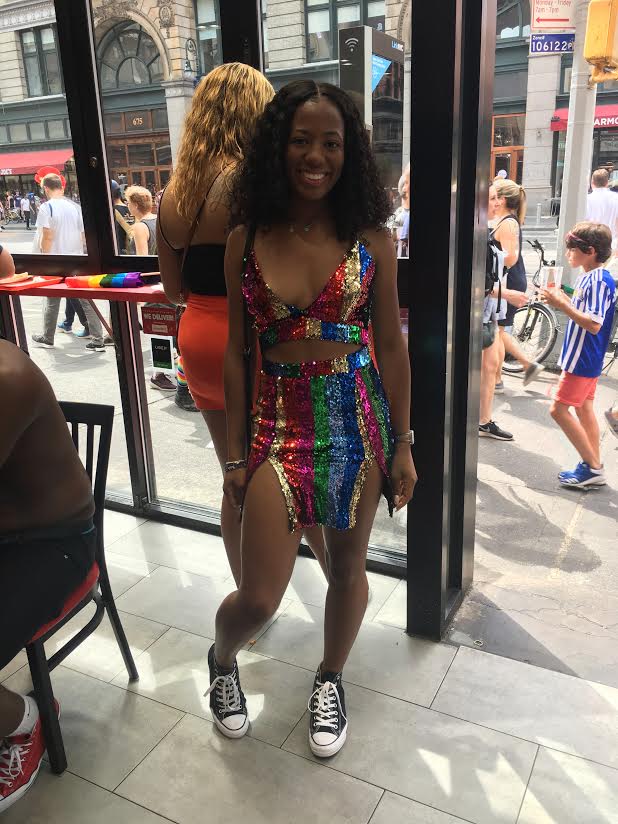 This woman took a different, less casual approach to the parade. Her two-piece is both fashionable and festive. Although the look appears to be almost made for a red carpet, she dresses it down and makes it parade-appropriate with her converse. Its shimmery lining stands out, but the rainbow pattern blends right in with the rest of the crowd celebrating Pride. 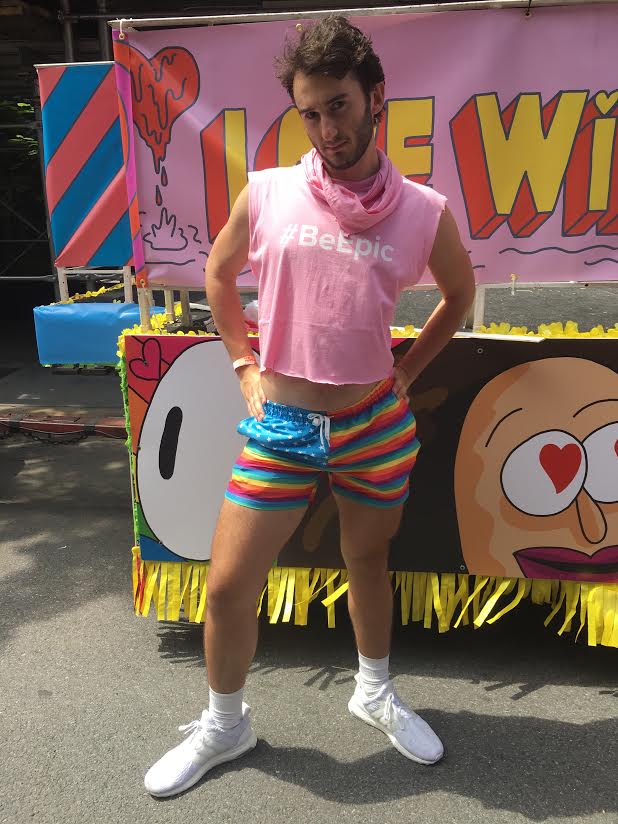 This man sported a casual yet stylish look. The hybrid of the American flag and the pride flag on his shorts combines his two identities into one. The American LGBTQ community still has a ways to go in terms of acceptance, and this pride attendee’s shorts have a greater vision for the lives of gay people in America. Although they are simple shorts, they provide a look into the history of LGBTQ acceptance - from the Stonewall Riots to the legalization of gay marriage - and the mere range of what pride encompasses.

The fashion at the pride parade went beyond sheer style. Fashion becomes a mode of expression as well as a way to unify a community that is commonly unheard. The parade’s innovative and expressive outfits have historically been a central part of the LGBTQ community, and they make each parade a colorful and joyful celebration.