‘I was not surprised’: Students react to Confederate flags hung at American University

Confederate flag posters with cotton stalks attached to them were found across campus Tuesday night, prompting responses from African-American and Jewish groups at AU. One of the posters was found beneath a sign for the Center for Israel Studies, while another poster was found on a bulletin board outside the Center for Diversity and Inclusion.

This incident is the third such racist incident to take place in the past year at AU. Last September, a black female freshman reported having a banana thrown at her by white male freshmen. In May, bananas scrawled with the letters “AKA Free ” tied to nooses were found around campus following the swear in of the sorority, Alpha Kappa Alpha’s first African American member.

The University’s reaction to Tuesday’s incident was much better than when the incident in May occurred, one student said.

“I think they responded very quickly, within 12 hours of the event they released the footage of the person who did this,” senior Aaron Torop, a Jewish Studies major active in the Jewish community in D.C., said. “President Burwell calling a town hall was a step in the right direction.”

In the spring, protests erupted on campus as students demanded transparency and trust from administration. A rally for “courage against terror” was planned by Student Government and the Antiracist Research and Policy Center on Friday.

“Sylvia [Burwell] gave us a space to express our concerns without us having to protest. I was also surprised that Public Safety published pictures and statement,” sophomore Jaha Knight said.“I was like ‘wow, this is a different AU.’ American was not transparent with what happened last year. I feel like they have done everything they could do this time.”

Many students have raised serious concerns over campus safety. Security footage showed the suspect entering campus buildings without being stopped by Public Safety officers or others on campus.

“I feel that we pay enough money to have gates. We've had all of this stuff happening on campus, I feel like we should have gates,” Knight said. “A lot of private campuses have gates, like Temple University, where you have to show your ID or swipe your ID to get in. I think that’s reasonable.”

After experiencing racial incidents before on campus, Knight was among those who were not surprised when news of the incident erupted.

“I was not surprised when this happened. One of my friends sent me a screenshot of a Snapchat and I had no reaction. The freshmen, my orientees were in shock,” Knight said. “The upperclassmen, we weren't really outraged, it was the freshmen that were outraged.”

Several Jewish students also felt targeted by the incident, since one of the posters was found by a bulletin board for the Center for Israel Studies. Torop believes an inclusive conversation with those who are affected is desperately needed.

“I think we need to center the conversation around black lives, I think the University feels pressure to include us [Jewish students] and ask us how we are all feeling,” Torop said. “I think we need to focus the suggestions by the people that have been directly affected by this.”

Pamela Nadell and Michael Brenner, the directors of the Jewish Studies program and the Center for Israel Studies respectively, released a statement after the incident emphasizing the importance of speaking out and exposing hatred and prejudice.

“As scholars of the Jewish experience, we know too well the Jewish people’s long history of being targeted by the type of hate and ... prejudice that was demonstrated at American University this week,” Nadell and Brenner wrote. “But we also know the Jews’ history of activism – of resisting those who attack people because of their race, religion, or background, and of fighting for the rights of those victims.”

“I think there needs to be a conversation with specific ethnicity groups and Public Safety in terms of what safety means to them and how they would best feel safe,” Dumpson told The Eagle on Wednesday. “A one size fits all form of safety does not solve the problem.”

In addition to organizing a rally on Friday, Student Government released a list of “actions and expectations” for administrators to take on retention, safety, accountability and education surrounding diversity and inclusion.

“To American University students who are concerned with their safety as a result of this and other acts that we have faced as a community this year, know that we will not stop advocating for a safer, more inclusive and united student body,” Dumpson wrote in a statement. 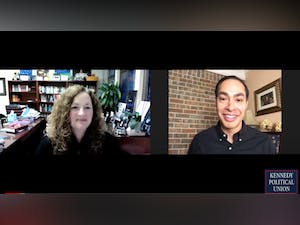