A  portrait of Venezuela’s new president Nicolás Maduro hung on the wall next to projection screen that read “Viva la Revolution” as people flooded into the Embassy of the Bolivarian Republic of Venezuela for a film screening of “Che: Part One.” Guests sat in chairs lined neatly in the center of the room while others crammed themselves on the floor, drinking homemade Venezuelan hot chocolate and waiting for the movie to begin.

Over 700 people expressed interest to attend the event on Facebook, however, only the first hundred people were able to get in past the doors. In honor of the 48th anniversary of Che Guevara's death, The Latin American Film Club hosted a film screening starring the revolutionary hero in the 2008 film “Che: Part One" directed by Steven Soderbergh. The movie portrays the life of Ernesto “Che” Guevara from the early stages of the Cuban Revolution to his legendary speech at the United Nations in 1964 condemning the social and systemic issues that plague Latin American countries everyday.

“‘Che: Part One’ helps us learn more about one of the left’s most recognizable figures”, Francesca Emanuele, political analyst for the Embassy of the Bolivarian Republic of Venezuela said after the showing. “It shows the importance of a revolution that did not bow down to international attacks and geopolitical pressures.”

The movie portrays Fidel Castro, Che Guevara and their gang of armed rebels battling with police to overthrow the dictator Batista and the tribulations that followed after they gained control.The audience received a personal glimpse inside the life and mind of this revolutionary hero through interviews he gave in the past and through his journal entries he wrote during and before the war.

Nora Marcus, a sophomore at George Washington University, said she attended this event with high hopes of learning new things about Che Guevara and Cuba’s past.

“This is the first embassy event I have attended, and I thought it was an amazing learning opportunity,” Marcus said. “I am really excited to learn more about Che Guevara’s life and his struggles.”

A 20-minute question and answer session followed shortly after the film led by Professor Piero Gleijeses of the Paul H. Nitze School of Advanced International Studies at Johns Hopkins University. Gleijeses is an expert on Cuban and U.S. foreign policy and his latest books published in 2009 include “Visions of Freedom: Havana, Washington, Pretoria” and the “Struggle for Southern Africa.”

“A real revolutionary goes where he is needed,” Gleijeses said to open the discussion. The professor addressed the trials and tribulations Che Guevara faced in order to see his vision come true.

The Latin American Film Club of Washington D.C sponsored the event, and they aim to provide a space for learning the popular struggles in Central and South America that have shaped today's reality for the region.

The club hopes to promote a better understanding of Latin American reality in the United States and to construct stronger bonds between both worlds. Although the one hour and 34 minute long film captured the attention and expanded the minds of many in the room, the storyline became a little obscure towards the end of the film, making it difficult for viewers to see where the film was heading.

The Latin American Film Club plans to hold more film screening events in the future to spread awareness and culture, according to its Facebook page. The group has announced that they will present a film at different locations every second Thursday of each month. More Information can be found on its Facebook page: https://www.facebook.com/latinamericanfilmclub/ 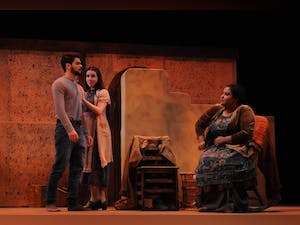