The Undergraduate Senate unanimously passed a bill Sunday advocating for the use of trigger warnings in classrooms and on syllabi.

According to Shannon McDermott, the bill’s author and a senator for the class of 2018, the bill was written in response to the Faculty Senate resolution on trigger warnings passed Sept. 9. While the Faculty Senate’s verdict was ultimately mixed, as the Eagle previously reported, its language regarding free speech has many students worried that professors will associate trigger warnings with censorship.

“I believe that the faculty senate was confused as to what a trigger warning is, and that’s why I decided to pass the legislation,” McDermott said.

She believes that trigger warnings facilitate free speech in classrooms, as they alert students to what will be discussed, giving those who might feel triggered by the material time to prepare.

Larry Engel, the chair of the Faculty Senate, said that the resolution did not firmly oppose trigger warnings.

“We do not endorse or mandate trigger warnings, but we certainly don’t object to them,” he said.

Engel said that he personally warns his students before showing them potentially disturbing material.

Leaders from Student Government and the Sexual Assault Working Group have been invited to speak at the next Faculty Senate meeting, which will be today at 2:30 in the Butler Board Room. All students are free to attend and speak, time permitting, according to Engel.

“We indicated pretty clearly that we are interested in looking at this issue and opening up conversation,” Engel said. “I’m here to hear from students and student leaders about the subject.”

While the SG bill — like the Faculty Senate resolution that prompted it — will have no immediate impact on University policy, McDermott said she hopes to collaborate with the SG Mental Health Working Group as they advocate for the widespread use of trigger warnings.

The Working Group plans to meet with professors who already use trigger warnings, figure out how they do so and encourage those professors to reach out to their peers. The group is also planning to meet with Faculty Senate leadership to discuss the issue.

Koch said the group is not currently pursuing a change in official University policy requiring trigger warnings because such rules at other colleges have not been successful.

“You end up having to define what is triggering, and that’s something that’s really hard to do, because different things trigger different people,” Koch said. “You want to be respectful of everyone because you don’t want any student to have to re-experience trauma in the classroom.”

The Working Group is also making an effort to empower students to talk to their professors about material that triggers them, according to Naomi Zeigler, a junior in CAS and member of the group.

“At the end of the day, SG is one body,” she said. “The student body is much larger than SG, and we want to make sure that we’re empowering people to take the steps to advocate for themselves.”

According to Zeigler, the group is also attempting to destigmatize mental health issues on campus by encouraging students to seek help from university services like the Counseling Center.

“AU and D.C. both are very fast-paced, high-stress working environments. And there’s not enough conversations about taking care of yourself and what that entails,” Zeigler said. “It’s okay to talk about what you’re going through, and it’s okay not to be okay.” 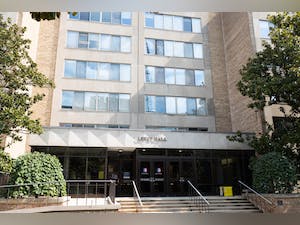