Students are questioning the efficiency and comprehensiveness of AU’s emergency procedures and AU’s Alert System following a series of alerts this semester.

One such incident was a tornado warning on Oct. 15, originally announced in response to reports from the National Weather Service, according to AU Director of Public Relations Kelly Alexander.

Heather DeLucia, a freshman in the College of Arts and Sciences, was in MGC during the tornado warning and said she felt the instructions given to those in the building lacked clarity.

“There wasn’t much order to what was going on, there was just a couple people who were telling everyone in the building to get to the basement because there was a tornado warning,” DeLucia said. “It would have been nice if they had given us a bit more direction.”

“With regard to the tornado warning issued on Oct. 15, the community reacted well to a potentially threatening situation,” Alexander said in an email.

The specific direction sought by AU community members like DeLucia can be found on AU’s Emergency Preparedness homepage. It provides files with detailed information on what to do in situations ranging from anthrax outbreaks to hurricanes and personal preparedness checklists for students as well as for faculty and staff.

“There wasn’t much order to what was going on, there was just a couple people who were telling everyone in the building to get to the basement because there was a tornado warning.”
- Heather DeLucia, CAS freshman

These procedures were carefully planned to best suit the community at AU, according to Alexander.

But it is mainly the responsibility of the AU community to research the correct procedures for an emergency situation. Students and their parents are informed about the AU Alert system and given emergency contact information during Eagle Summit. Following orientation, which not all students and parents attend, the AU community is simply encouraged to seek their own information about emergency preparedness, according to Alexander.

“Emergency Preparedness procedures are good to review and know, and we encourage the AU community to take a look at [the] reference guides[on the website],” Alexander said in an email.

AU’s emergency procedures are constantly being reviewed by the Department of Public Safety following each emergency that occurs on campus, according to Alexander.

In 2013, The Eagle reported that the emergency procedures available on AU’s website had not been updated since 2009. The procedures have been updated since then, but the full Emergency Management and Continuity of Operations Plan is no longer easily accessible online. It was replaced by a more user-friendly document designed for students and faculty, Alexander said.

Some of the procedures currently found on the website are more up to date.

For example, the Web page recently added information about Ebola to mitigate distress about the virus. The Web page assures students, staff and faculty that the likelihood of the virus reaching campus is small. Nonetheless, it states that AU is taking measures to prepare for any potential dangers.

“We actively participate in a regional healthcare consortium to provide the most updated services and recommendations for our campus. We also collaborate with local hospitals to coordinate information, training and access plans,” wrote Pat Kelshian, assistant vice president of Risk Management and Safety Services in an email sent to the AU community.

Emergency procedures were implemented in another instance when AU alerted the community to the sighting of a dangerous person on Wisconsin Avenue on Nov. 3. The Web page details the procedure for reporting criminal behavior on campus including what to do if taken hostage. Although the person was recaptured, AU did not inform the community.

In a kidnapping incident, the emergency procedures recommend staying alert, speaking only when spoken to, maintaining eye contact without staring and informing the captor of any medical requirements.

According to the Emergency Preparedness webpage, AU Alert messages are meant to deliver information about an emergency, inform readers on what actions to take and provide resources for further information.

Details and instructions regarding emergencies can be communicated to the AU community via text and email alerts, the University’s home page, AU’s social media pages and AlertUs emergency beacon boxes located across campus, according to Alexander. 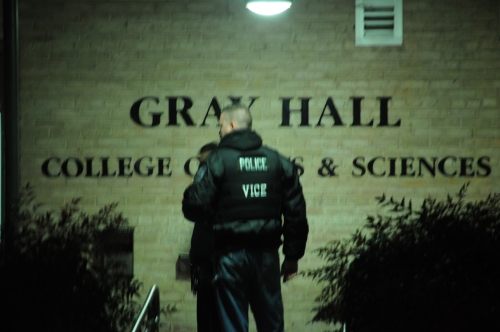 The alert system was used to inform the public rather than warn them during an incident in which a potentially dangerous gunman was on campus that occurred on March 23, 2013, according to Daniel Nichols, executive director of Risk, Safety and Transportation Programs, the Eagle previously reported.

The AU Alert message was sent to the community after the gunman had left campus, according to the article. University officials said the response was delayed because they did not believe the safety of the campus was continually at risk.

However, in a gun scare in December of 2013, five AU alerts were sent out to the AU community throughout the incident. Students were later given an “all clear” by the University.

“The decision to send out an emergency alert message is determined by how compelling a situation is and if there is an immediate threat to the AU campus,” Alexander said in an email.

One situation that did not generate an AU alert was the arrest of two men on campus on April 10, 2014. One of the men arrested was in violation of parole and had previously been convicted of homicide, according to Camille Lepre, assistant vice president for Communications and Media, the Eagle previously reported.

Natalie Rine, a freshman in the College of Arts and Sciences, appreciates the efficiency of the AU alert system, but wishes they were more thorough and conclusive.

“I think they make me feel safer, but they’re not always comprehensive, or they sometimes make me feel more panicked,” Rine said. “I like that its texted to me, because I think thats a good way of reaching me and other people our age, but then I immediately want to be updated more.”