Tale of left tackle will please all football fans

For those who do not know of Oher (played by Quinton Aaron), he grew up in Memphis, Tenn., where the Touhy family took him into their home. Michael attended a Catholic high school, where he learned to play football. After developing a very impressive skill set, Oher was recruited by NCAA powerhouses and eventually made his way to the NFL as the 23rd overall pick in the 2009 draft.

The movie opens with a clip of the night Joe Theismann had his career ended by Lawrence Taylor, one of the most vicious blind side tackles in NFL history. The movie then jumps to Memphis where we find Oher being accepted into a highly competitive and prestigious Catholic high school, despite a very poor academic record.

As the story progresses, the teachers discuss Oher’s resilience. It is not until Leigh Anne Touhy, played by Sandra Bullock, offers Oher a place to stay that the viewer gets a sense of Oher’s personality. Oher is a very compassionate, gentle person despite his enormous figure, 6 foot 4 inches at 309 pounds.

Touhy’s and Oher’s relationship becomes more central to the story and for the first half of the movie, there are very few actual football scenes. After working with his teachers, who have slowly warmed up to Oher, despite his initial resistance, he achieves a C grade average and becomes eligible to participate in athletics. At long last, the movie shifts direction from melodrama to sports film.

The scenes switch dramatically, as Oher is slowly taught proper football techniques and skills. He has trouble conceptualizing these skills until Leigh Anne steps in and relates football to protecting his family, something to which Oher can understand. It is not until his first game that Oher gets some attention.

After Oher’s friend and brother-figure, S.J. Touhy, sends a video of Oher’s first game, he is placed into a high school all-star game. Impressive would be an understatement to describe how he played. At this point, he has scouts trying to recruit him — so much that some recruiters even visited him at his house in Memphis.

The recruitment process is hilarious, as schools lay it all on the line for Oher in their offers. The coaches each make cameo appearances, and they are all on the appropriate team at the time the story takes place. It is fun to see Nick Saban recruiting for LSU, Lou Holtz at South Carolina, Tommy Tupperville at Auburn and Houston Nut at Arkansas.

Despite all of the attention, the process really came down to two schools for Oher: Tennessee and Ole Miss. Oher ended up choosing Ole Miss, the Touhy’s alma mater and a school with which they were active boosters. This choice came under scrutiny by the NCAA, who thought the Touhy’s took Oher under his roof in order to get him to play at Ole Miss. Following an NCAA investigation, this was proven not to be the case.

Even though it had a slow beginning and a few liberties were taken in telling the story of Oher’s rough history, the movie is well-made. The biggest surprises probably come from Bullock and Tim McGraw who play the Touhys. Each play the role of Southern-family stereotypes very well. Their compassion and love for Oher comes through clearly.

If you are either looking for a touching story of overcoming tragedy and achieving triumph or a good old fashion Southern football story, this movie has both, and it will please most any type of taste in movies. So get the friends together and go check out “The Blind Side.”

You can reach this writer at sports@theeagleonline.com. 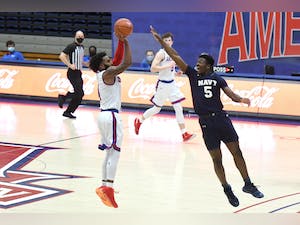