The New England Patriots defeated the Philadelphia Eagles, 24-21, in one of the best games in recent memory. With seemingly half of AU's population from either "outside Boston" or "outside Philly," it was one of the most divisive games seen on campus since the Red Sox-Yankees series last year.

The campus was equally green and blue through the last two weeks of Super Bowl hype. Remarkably, the game lived up to its billing, yet in the end, only one group of people could be satisfied.

If you don't love football or were just too tired to watch, here's what you missed.

Biggest pre-Super Bowl story that wasn't - Freddy Mitchell, one of the Eagle's wide receivers, said that he "had something" for Patriots safety Rodney Harrison. By the end of the game Harrison had more interceptions (two) than Mitchell had catches (one). So much for Freddy having something for Harrison.

Best taunt - The Eagles' heroic wide receiver Terrell Owens is known for his touchdown antics, including imitating the dance done by Baltimore Raven's defensive end Ray Lewis. Tonight the Patriots, a fairly quiet team when it comes to celebrating, did Owen's impressions every time they made it to the end zone and even after interceptions. Apparently they also were sick of all the pre-game TO coverage.

Biggest corporate shill - Rapper Xhibit. This may be a little off-topic, but the rapper-turned-salesman was featured prominently in the new Diet Pepsi ad featuring P. Diddy. Seriously, has anyone made more of a transition then Xhibit? He's like a real-life Krusty the Clown, selling anything that advertisers put in front of him.

Worst camera angle - The pile-on cam. Fox always has a way of throwing in stupid gimmicks that should have been left on the cutting-room floor. During baseball season it was Scooter, the talking baseball that told young fans what each pitch was. Tonight it was the pile-on cam, used once after the Corey Dillon touchdown. Basically it was a bad view of a touchdown from the sidelines. Congrats, Fox, nice way to really make the game come alive.

Biggest guy to come through - Although Super Bowl MVP Deion Branch had a huge game with 11 receptions, and Patriots safety Rodney Harrison picked off two of Donovan McNabb's passes, the MVP should go to Domino's Pizza, which came through with deliveries to countless AU students on the company's busiest day of the year (at least, according to the Orlando Sentinel).

Greatest cheer of the night - Patriots linebacker Teddy Bruschi and his kids. In the second half Fox showed footage of Teddy Bruschi on the field playing around with his kids. The girls watching the game with us let out a big "aw' and clapped louder than any other time. I found that the touchdown by Mike Vrabel was better, but what do I know?

In the end, this may be one of the best Super Bowl's in students' memories. The Patriots are now the team of the decade, and Philadelphia once again has a long winter and spring ahead of it. But hey, cheer up - as any Red Sox fan can tell you, there's always next year.

On a side note, was anyone else hoping Paul McCartney would have a "wardrobe malfunction" 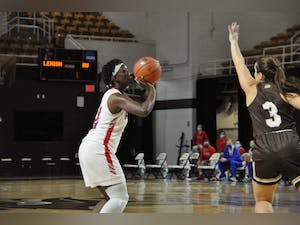 AU spring and fall sports will return to 2021 competition