All lose in AU vs CAA

Since the AU administration made the decision to join the Patriot League last spring there has been little to cheer about for AU's student-athletes. Originally their concern was moving from the Colonial Athletic Association to the lower-ranked Patriot League. This meant less competitive matches and in some cases longer road trips, which is an increased burden to the athletes.

After AU's decision to leave, several other universities also left citing that the future of the CAA was in jeopardy. In essence, AU's departure sparked a chain reaction that includes the University of Richmond and Eastern Carolina University. This has caused a great deal of friction between the CAA and AU during its final year in the conference. The CAA in their bitterness has fined AU $250,000 and suspended them from post-season play. The sanctions are currently being litigated in court.

AU administration, including President Ladner, should have expected this. It was part of the CAA contract that if AU left without giving three years notice, the CAA could implement any sanctions they found necessary. Of course this option was never discussed while the administration was touting the benefits of moving to the Patriot League.

Even though they knew it was coming, once again the student-athletes are being ignored and short-changed by the petty differences between AU and the CAA. While AU's decision to leave the CAA cannot be reversed at this point, there is no reason for the CAA to punish the school's athletes from competing in meaningful competition this season.

The women's volleyball team is one that will be particularly affected if the lawsuit filed by AU fails. They finished second in last year's CAA championship and they are poised to take the title this year. A championship means a berth in the NCAA tournament, but because of the frustrations and animosity between our school and the CAA these women will not have the opportunity to enjoy the fruits of the most competitive and challenging season in their history.

With as much tuition as the normal student pays to attend this school, there is no doubt that the university can pay the $250,000 fine and possibly more (considering that sum can be fulfilled by the tuition of 14 undergraduate students). However, to unfairly sanction our athletes for a decision they never wanted is unacceptable.

Satire: Wonk Cat takes semester off to backpack through Europe

Staff Editorial: The Patriot League Social Justice Coalition demands more of us all 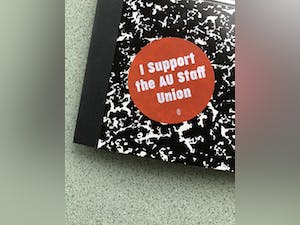 In an era of COVID-19, AU staff deserves a voice