A 17-shot battle ended in a draw as American University men’s soccer (3-3-3) and Loyola University Maryland (3-3-3) each scored one goal.

In the 31st minute of the game, AU committed a foul in the box which allowed for a penalty kick from Loyola’s senior forward Daniel Tshiani. Tshiani found the back of the net, giving the Greyhounds a 1-0 lead.

In the final minute of the first half, senior midfielder Jack Green dribbled up the left wing looking for an open teammate. With 16 seconds remaining, Green launched a pass to freshman midfielder Troy Elgersma, who headed in his first career goal to even the score 1-1.

“I was getting in on the back post hoping Jack was going to hit it,” Elgersma said postgame. “Fortunately he did and I was able to just get over the left back and head it in.”

In the final seconds of the game, graduate student forward Jerry Zouantcha passed the ball to sophomore forward Zemi Rodriguez at the top of the penalty arc. Rodriguez had the chance to score the winning goal, but his shot hit the top of the crossbar as time expired. Rodriguez and his teammates walked off the field in agonizing disappointment, as an opportunity to defeat the defending champions slipped through their fingers.

Even though the Eagles couldn’t secure the win, head coach Zach Samol expressed his optimism about the rest of the season.

“We’re disappointed that we left points on the table, but there’s also good things going on with this team,” Samol said. “We’ve been able to come back from bad starts and really show these teams what we’re about in tough situations.”

In the Eagles’ three wins of the season, only one of their five goals was scored in the first half. Of the four goals scored in second halves, AU scored three in the final 20 minutes of its respective games.

Column: What does Caroline O’Connor’s promotion mean for women in sports? 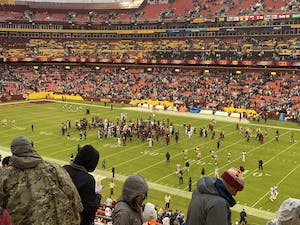