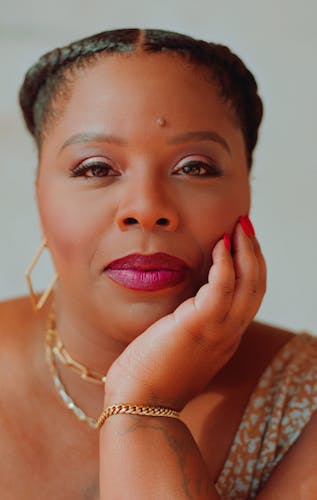 Patrisse Cullors and asha bandele, co-authors of “When They Call You a Terrorist: A Black Lives Matter Memoir,” spoke at American University’s virtual Raise Your Voices event about the process of writing their memoir, community organizing and being mindful about social media.

Cullors is the co-founder of the Black Lives Matter movement and bandele is an activist and author. The two worked together on their book that focused on systemic racism, the war on gangs and the birth of a movement.

When moderator Wim Taylor, director of the Frederick Douglass Scholars Program, asked bandele and Cullors what they learned from the process of writing their book, Cullors began by expressing her gratitude to be “holding space” with those gathered.

“When They Call You a Terrorist,” is a memoir of Cullors’ childhood and journey that led her to co-found the Black Lives Matter movement. Cullors said the process of writing the memoir was cathartic and healing as much as it was taxing. She credited bandele as being an amazing “midwife” to the book, without whom she said she could not have written it.

“I thought, ‘I know how this story gets told if I don’t tell it,’” Cullors said.

Cullors credited author and civil rights activist Michelle Alexander with popularizing and explaining the war on drugs, but Cullors wanted to add to the conversation and write about the war on gangs and the toll it took on Black communities.

Cullors said that writing a memoir wasn’t something she did to center herself in a narrative, but to tell a larger story and to take control of the way the story of Black Lives Matter would be told.

bandele said that writing with Cullors made her a better listener and helped the two build a true sisterhood. Where Cullors is adamant at viewing her experiences as part of a larger movement to repress Black freedom fighters, bandele emphasized that there is power in centering oneself, noting that memoirs have historically been a woman’s realm.

bandele reminded Cullors that when she decided to write her book, she was in the process of being erased from her work. bandele still grapples with the knowledge that Cullors was never paid for her organizing.

Men were becoming the faces of the Black Lives Matter movement, and bandele said that Cullors needed to tell her story because “some little girl who’s Black and queer … will see [Cullors] and say … I can do that.”

Cullors and bandele discussed the impact of social media as a tool both for amplifying problems like police violence but also for spreading misinformation. Cullors said that algorithms are racist and actively spread disinformation and misinformation about Black women.

Cullors also noted that digital civil rights are both vitally important and not legally existent, but that she and a crew of mostly Black women are currently fighting for those rights. bandele added that critical thinking skills are essential to navigating social media.

Taylor ended the event by asking Cullors and bandele for advice for people to continue to do the work in activism and community organizing.

Cullors said the most important thing is to be in connection and deep relationship with people around you. bandele closed her response by saying that love is grounded in all the teachings of activists and organizers.

“Love is the only strategy,” bandele said.