From inside the Georgetown Flea Market, it sure seems like DC is a sports town

Fans can find retro apparel, memorabilia and good conversation at the weekly market 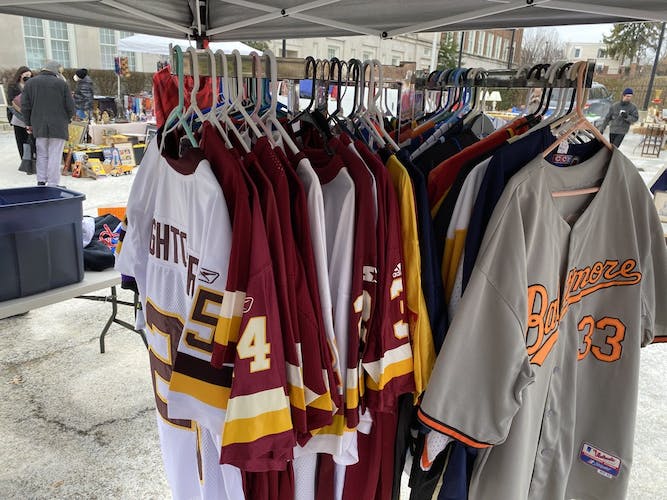 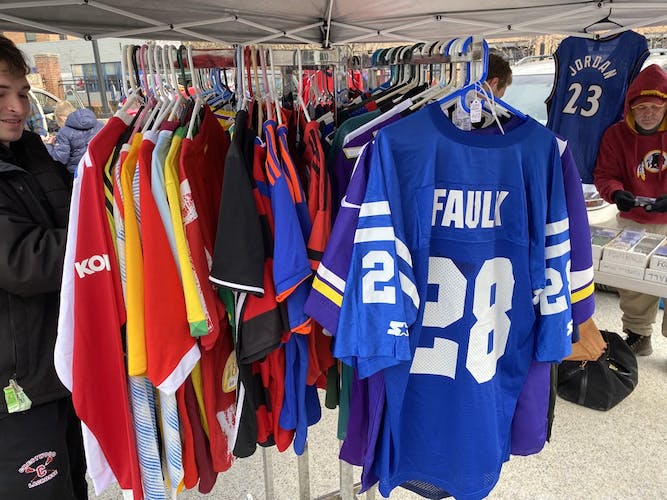 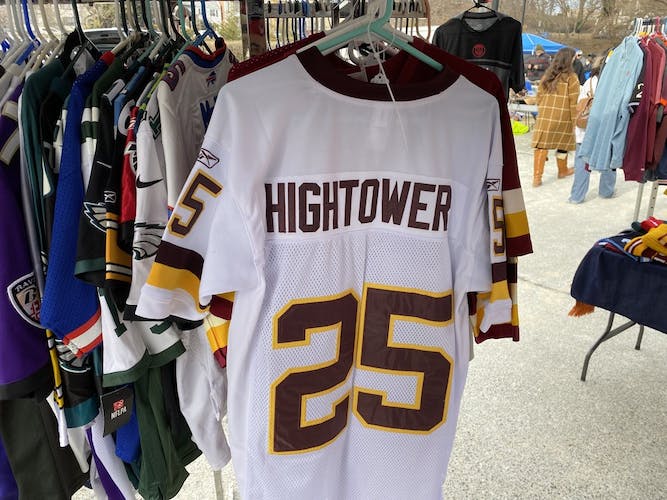 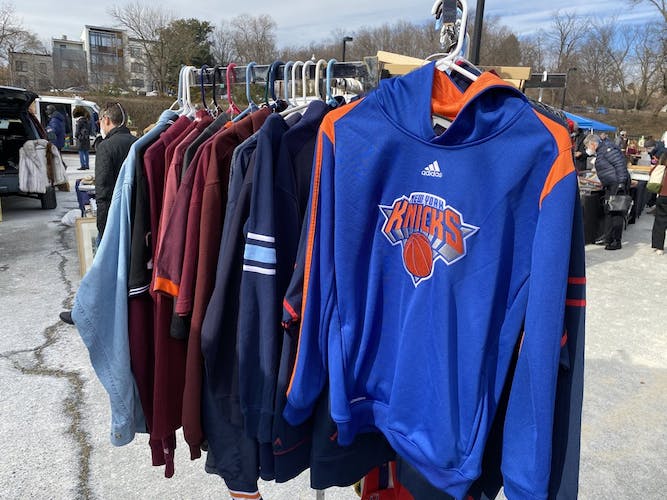 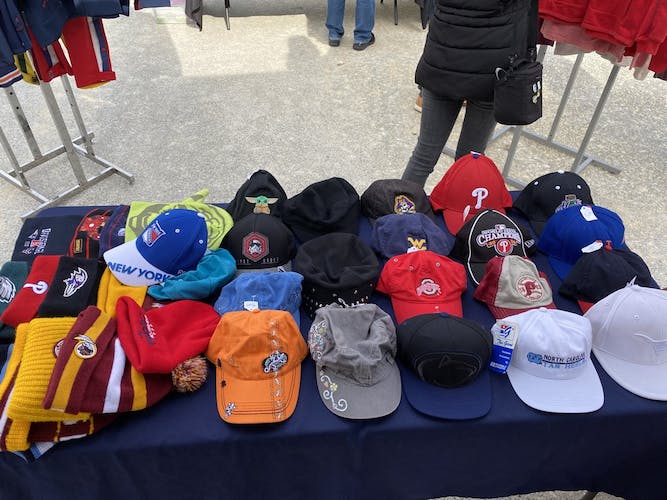 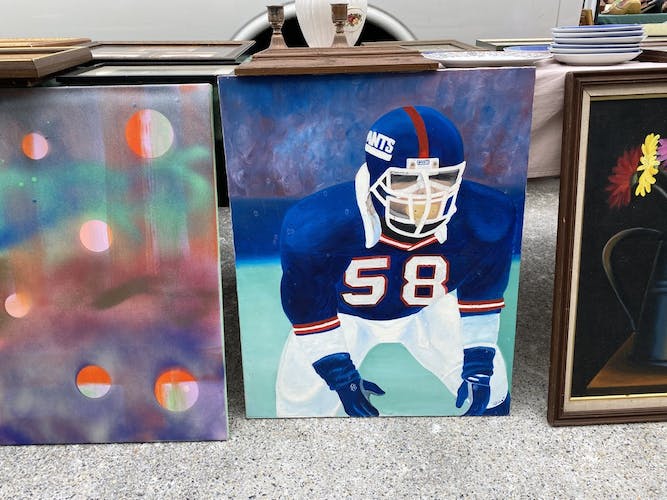 Sunday Jan. 23 was a typical January morning in Georgetown: 38 degrees, bustling with life and not sunny, but not quite cloudy.

As students, young couples and families roamed the red brick streets looking for a breakfast pastry and a morning coffee, many funneled toward a familiar landmark: the Georgetown Flea Market.

“If there is a downpour or a blizzard, we suggest you go to the movies,” the flea market’s website bluntly proclaims. “Otherwise, come on down! There will be vendors.”

The Georgetown Flea Market is open every Sunday from 8 a.m. to 2 p.m. and is a spot favorited across the city by a bizarre conglomeration of fashionistas, craftspeople, collectors of all collectibles and sports fans.

“In the last two years, the student population coming through here has really just kicked this whole market up,” said Brian Hawkins, a regular vendor at the market. “If you talk to other dealers … they’ll tell you the same thing.”

Nestled in a parking lot off of Wisconsin Ave. and 35th St., the flea market features dozens of pop-up stands selling all sorts of used and handcrafted goods since its opening in 1972. Each stand is unique, but nearly every single one features at least a handful of products adorned with one thing: sports logos.

D.C. is home to a team in each of America’s four major sports leagues, the storied Georgetown Hoyas and teams in the MLS and WNBA.

Sports were in the air this particular Sunday morning. The NBA’s 23-23 Washington Wizards were warming up to face off against — and get blown out by — the Boston Celtics at Capital One Arena just over three miles from the flea market. The night before, the NHL’s Washington Capitals grabbed a home overtime win against the Ottawa Senators at the very same arena in downtown D.C. The MLB’s Washington Nationals slept in on Sunday after recently finishing dead-last in the NL East.

The NFL’s Washington Commanders, still known as the Washington Football Team at the time, sat on their couches Sunday to watch the Los Angeles Rams play the Tampa Bay Buccaneers and the Buffalo Bills play the Kansas City Chiefs. The Football Team finished third in the NFC East, so rather than taking the field to compete for a Super Bowl this year, they headed to the grocery store to pick out snacks for their own personal Super Bowl parties.

The district is known for hosting rather middling teams throughout history: “The general public isn't rooting for [D.C. sports] teams as much as the city name on their jerseys,” the late Fox Sports journalist Chris Chase said in his 2017 article, “Washington D.C. might not be the worst sports town, but it’s the most pathetic.”

Taking the Georgetown Flea Market as a microcosm of the D.C. sports fandom, Chase’s assertion doesn’t quite hold up.

Before even entering the flea market’s gates, the vendors’ affinity for sports becomes incredibly apparent. Letterman jackets representing the New York Giants, the Georgetown Hoyas and NASCAR all hang from the bus stop where the 33 bus regularly drops off eager American University shoppers who hopped on at the Tenleytown stop.

Flipping through the racks of clothing reveals some exciting finds for fans of most teams: a retro Seattle Seahawks Champion crewneck sweatshirt, a Golden State Warriors Hardwood Classic warmup and a Lehigh Valley Phantoms AHL jersey stand out as some fun additions to any sports fan’s wardrobe.

The flea market’s home city, however, seems to largely be missing from the racks, and one may start to wonder whether Chase was correct in asserting the apathy of the D.C. sports fanbase.

Any doubt surrounding D.C. sports fans’ loyalty immediately dissipates upon entering the flea market’s gates and spotting Brian Hawkins standing with his hands in the pockets of his Washington Redskins hoodie behind the table at his stand, Replay Sports Apparel.

“I’ve been running the stand for about three years,” Hawkins said. “I previously had a card shop back in the nineties where I collected this type of stuff. It kind of just took off again, and I really enjoy it.”

Hawkins’ stand is any retro sports fan’s wildest dream. If a Randy Moss Minnesota Vikings jersey isn’t enticing enough, stellar finds such as an Isiah Thomas Detroit Pistons jersey, an Eddie Murray Baltimore Orioles jersey, or any number of vintage hoodies, sweaters and t-shirts will have even the most casual of sports fans stopping to browse.

Hawkins sells his fair share of modern jerseys, but the real money is in the retro apparel. “The most unique item I’ve ever sold was a Washington Senators Frank Howard game-used jersey,” he recalled, reminiscing about the jersey that netted him $6,000. “He was just a Washington baseball legend.”

Hawkins’ stand features a healthy diet of different teams from across the country, but the unmistakable sea of red — the primary color for each of D.C.’s four pro teams — dominates his racks.

Hawkins is stocked up. A Michael Jordan Wizards jersey hangs above a collection of Nationals hats situated next to a table covered in memorabilia featuring just about every D.C. and Baltimore team — even the defunct Washington Senators and Baltimore Colts.

Nationals and Wizards jerseys are peppered throughout the racks, culminating in an entire row of bright red Capitals and maroon vintage Washington Redskins jerseys. These are the big sellers.

“The Capitals are probably my most popular,” Hawkins said. “The better they do, the more I sell. It’s part of the equation, how well the teams do.”

The Capitals, comfortably in 10th out of 32 in the NHL power rankings, are D.C.’s premier pro team at the moment, but based on flea market findings, it would be foolish to believe that the district’s football fanbase lies dormant.

Hawkins’ stand features more football jerseys and shirts than all of the other D.C. teams combined. Clearly, however, “Washington Football Team” is not the most marketable name, as none of the merchandise actually features the then-modern branding — it’s all Redskins. Perhaps the team’s new identity, revealed on Feb. 2 to be “Commanders” will gradually phase out the outdated Redskins gear.

Popkin, one of Hawkins’ regulars, frequents the flea market for his collecting needs, and the two have built a relationship over the past year. “[Zach] comes by and gets cards from me just about weekly,” Hawkins said. “I’ve probably got a dozen or so that come by and either buy a jersey or cards from me once every week or once every couple weeks.”

Leaving Hawkins’ stand, sports merchandise becomes much more sporadic, but hidden gems are still plentiful — and random. A lone Baltimore Ravens jacket sits on a rack in between dozens of sequined dresses. A signed Wizards Antawn Jamison plaque rests against the leg of a table displaying vintage pottery. A VHS entitled “Michael Jordan: Come Fly With Me” is propped against a curb underneath a rack of t-shirts. All throughout the flea market, countless sports gems wait to be discovered.

All things considered, students shopping for sports merchandise at the Georgetown Flea Market is a mutually beneficial match made in heaven. The Capital One team store at the arena and GT Players a half-mile walk away are both options, but both lack the affordability of the flea market, and neither has the selection of even just Hawkins’ stand, let alone the entire market.

Hawkins leads a busy life, but the flea market is his “main thing,” he said. “I do four flea markets a week. I do two in Bethesda, one in Arlington and then this one.”

Crediting the student population flocking to the market from schools like AU and Georgetown, Hawkins makes one thing very clear: “The Georgetown market is by far the best.”

Letter from the editor: how we reported on AU’s isolation conditions