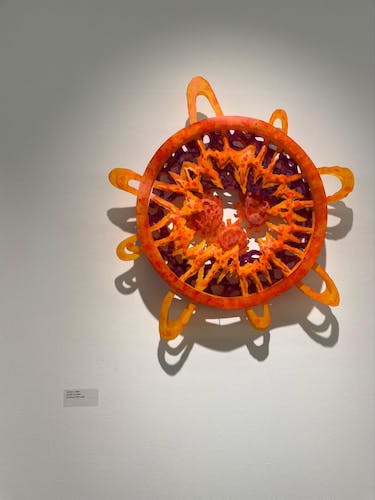 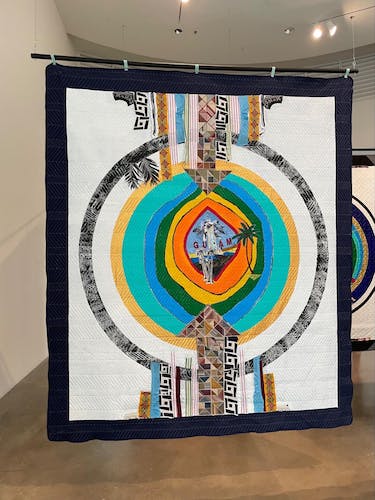 The American University Museum at the Katzen Arts Center opened in August and currently features five exhibits, all with very different themes.

The museum features a variety of exhibits every season that open viewers up to a whole new world of art. “Reveal: The Art of Reimagining Scientific Discovery” and “Successions: Traversing US Colonialism” are two of the exhibits that introduce viewers to new perspectives on the world we live in today.

“The Art of Reimagining Scientific Discovery” by Rebecca Kamen

“Reveal: The Art of Reimagining Scientific Discovery” by Rebecca Kamen uses a mixture of models and paintings. Kamen focuses on rocks, cells, cell processes and viruses in her exhibit.

The rock models are made out of mylar and are painted with acrylic paint, making the viewer look at different types of rocks in a new way. By making these models colorful, Kamen hopes to demonstrate the importance of rocks in an interesting way.

She also includes cell processes such as cell division in her pieces titled “Warming.” “Warming” is painted on mylar with washes of bright colors. Creating these pieces introduces viewers to the beauty of cells and how amazing the human body is in the ability to conduct such processes.

Kamen also made several models of the coronavirus out of mylar and painted with acrylic paint. She produced these pieces to pay tribute to the losses from the virus and the relevance it has in all of our lives. She also demonstrates the complexity in the structure of the virus through the accurately placed features and bright layers of orange. Kamen encapsulates the beauty of science and the importance it has on all of our lives. “The Art of Reimagining Scientific Discovery” honors how far science has come in the past years and educates audiences on just how much we know about science.

“Traversing US Colonialism” by Amber Robles-Gordon

“Traversing US Colonialism” is an exhibit created by Amber Robles-Gordon. It is a mixture of quilts and collages that detail the United States’ history of colonization. In her quilts, she depicts some of the territories the U.S. has invaded and the effects it's had on the people living in those areas.

Robles-Gordon’s quilts demonstrate how U.S. colonization has specifically affected people in those territories spiritually and politically. Each side of the seven quilts depicts these effects in order to demonstrate just how much damage was done as a result. The quilts intend to make the viewer think about the actions of their country in the past and how that is prevalent in the future. To the viewer, she wants her audience to question the effects of colonization on the people, not just the benefits of their country.

Robles-Gordon's exhibit also includes her own story in it, incorporating her birthplace of Puerto Rico. This portion of the exhibit is titled “Place of Breath and Birth,” which includes collages displayed on canvas. Here, she brings to light the debate of statehood for her birthplace as well as the effects that the pandemic had on Puerto Rico. Robles-Gordon intends to educate her audience on how U.S. territories, specifically Puerto Rico, are directly affected by the United States’ actions. Robles-Gordon highlights the lack of support that the country has given to Puerto Rico and how that has been similar for the other territories under U.S. control. Amber Robles-Gordon demonstrates how US colonialism affects the people within those territories and specifically how it affected her own country.

The AU Museum brings to light many different perspectives on the world we live in today. “The Art of Reimagining Scientific Discovery” and “Traversing US Colonialism” will help students and residents better understand the advancements and tribulations of the nation to better engage in the environment around them.