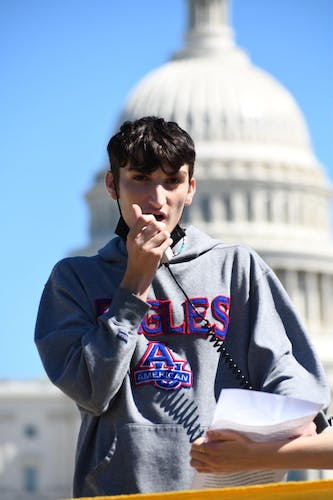 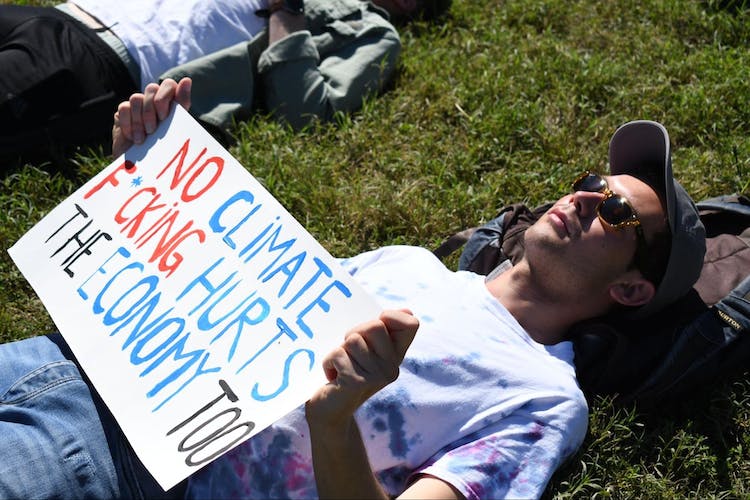 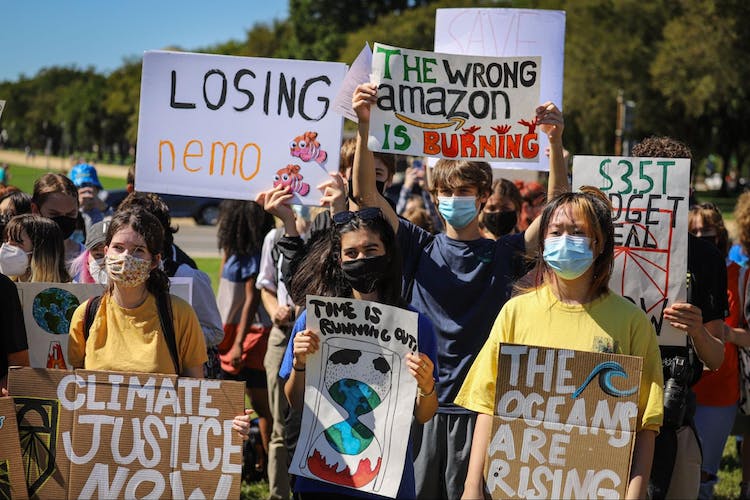 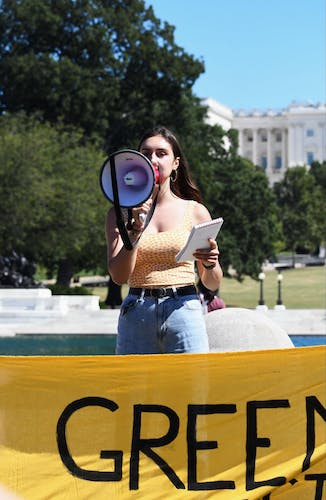 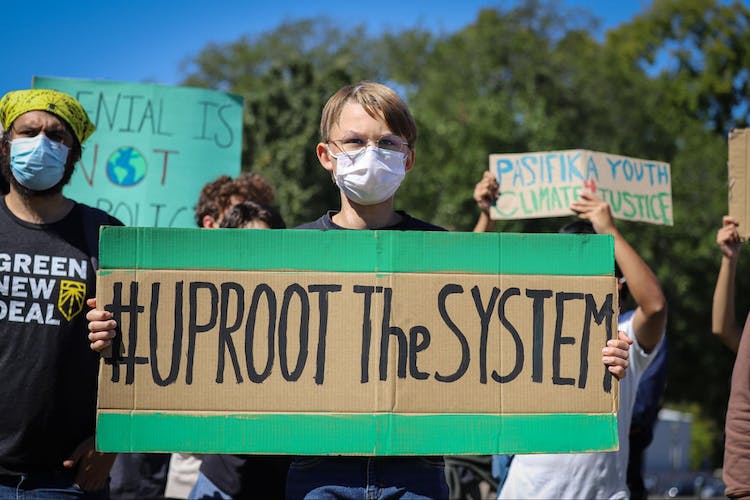 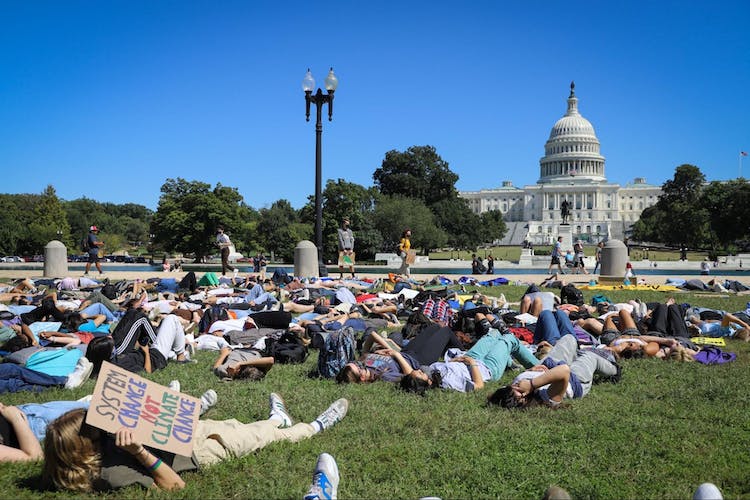 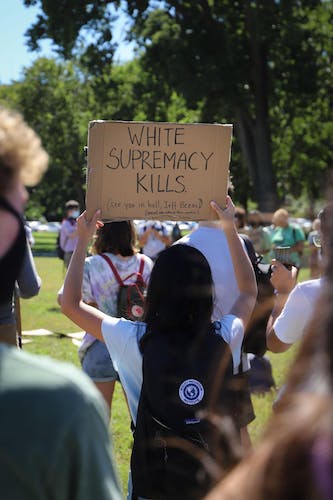 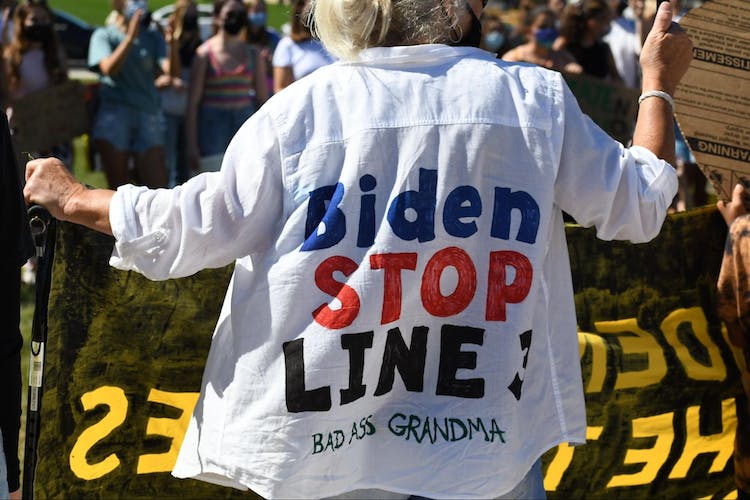 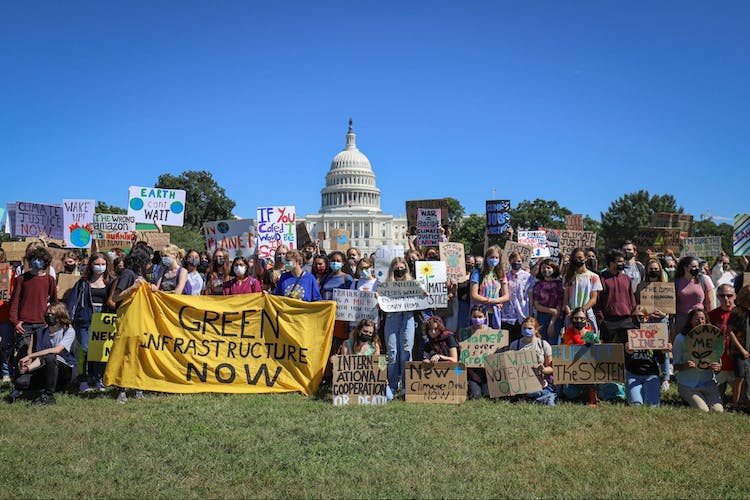 Editor's Note: This article has been updated to clarify the Gallup poll results.

The protest was part of a day of climate strikes that drew in hundreds of thousands of people around the world. The collective strikes were led by Fridays For Future, an organization founded by 18-year-old climate activist Greta Thunberg.

The D.C. strike on Sept. 24 was primarily organized by AU’s Sunrise Movement chapter, with freshman Magnolia Mead leading the initiative. Student speakers took to the stage, joined by local high school students and other activists, as they pressed Congress to meet their demands. Representatives from environmental organization Zero Hour and women-led grassroots organization Code Pink spoke alongside those from Sunrise D.C. and Sunrise AU.

“This $3.5 trillion bill is a starting point,” Mead said in an interview with The Eagle. “I don’t really think that there’s anything right now that will be enough, we just need to do what we can.”

Speaker Em Hilberer, an American University graduate who works with the D.C. Sunrise Movement, said that the Civilian Climate Corps is the most important piece of legislation for her.

“I think that it's a no-brainer,” Hilberer said to The Eagle. “It’s so important to have a group of people that are dedicated to building infrastructure that's sustainable.”

The speakers included a number of chants in between their speeches, engaging the crowd. While many protesters said that they support a Green New Deal, others said a Green New Deal does not go far enough to address intersectionality.

Mead addressed the atrocities committed against Indigenous peoples in the past: “Many of us, as descendants of the colonizers, must acknowledge this history and must hold this government accountable to protecting Indigenous rights and sovereignty today.”

For Sunrise AU, the strike came just days after several members were arrested for protesting outside Senate office buildings. Along with members of Sunrise GW, they were briefly detained by U.S. Capitol Police before being released.

The Friday protest drew an overwhelmingly young crowd, in line with the nature of the movement for climate justice as a whole. Americans aged 18 to 34 are more concerned about climate change than their older peers. According to a 2018 Gallup poll, 70 percent of surveyed Americans 18-34 report that they worry frequently about climate change, compared to 56 percent of those ages 55 and older.

Cassie Rodrique is a sophomore at AU, a member of AU Sunrise and an intern in the Office of Sustainability. Rodrique said the organization places an emphasis on youth involvement and leadership.

Organizers facilitated a “die-in” during the protest. Protesters and organizers lay on the ground to represent lives that have been and will be lost to the climate crisis.

“The countries that haven't caused climate change are the ones that are affected the most,” Mead said, as protesters lay on their backs in front of the Capitol building.

While the protest focused on policy decisions in the U.S., protesters maintained that climate change is overlooked globally. Protest attendee Georg Hahn, a second-year graduate student at AU studying abroad from Germany, noted that climate issues being ignored is a universal problem.

“In Germany, we have elections coming up Sunday, and as a young person I kind of feel left out of the debate and I feel not heard,” Hahn said of last week’s election. “Our generation’s voice is not heard and policymakers don’t pay attention to what we’re demanding.”

Some of the largest protests were in Europe; organizers estimated more than 100,000 people turned out in Berlin, Germany, where Greta Thunberg spoke to the crowd. Over 200 strikes were scheduled in the United States on Friday, with some drawing crowds of thousands and others with just a handful of participants.

The day of protests was reminiscent of Sept. 20, 2019, when millions of young people — including Sunrise AU — turned out around the world for the first-ever global Youth Climate Strike. Since then, activist groups have continued to build momentum for their cause, staging demonstrations and pressuring political leaders to take climate change seriously.

In some ways, the protesters’ goals have become more attainable, at least in the United States, since the 2019 strike. President Donald Trump rolled back over a hundred environmental regulations during his time in office. By contrast, President Joe Biden has called climate change “the number one issue facing humanity” and is pressing Congress to pass major environmental legislation, though his plan doesn’t go nearly as far as what activists are pushing for.

Fighters for climate justice at AU won’t stop here. Activists organized Friday’s protest in just two weeks and students are committed to continuing their action until they see concrete change.

“This is our chance and we need to not let it go to waste,” Mead said. “And if it means going to Capitol Hill every week just so they never forget, we’re going to keep doing that.”

A last word: farewell from The Eagle's class of 2022