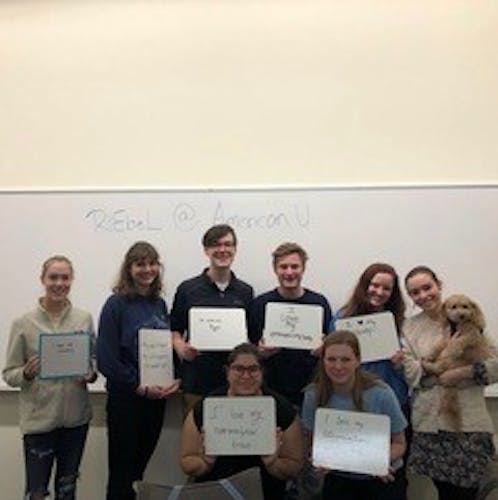 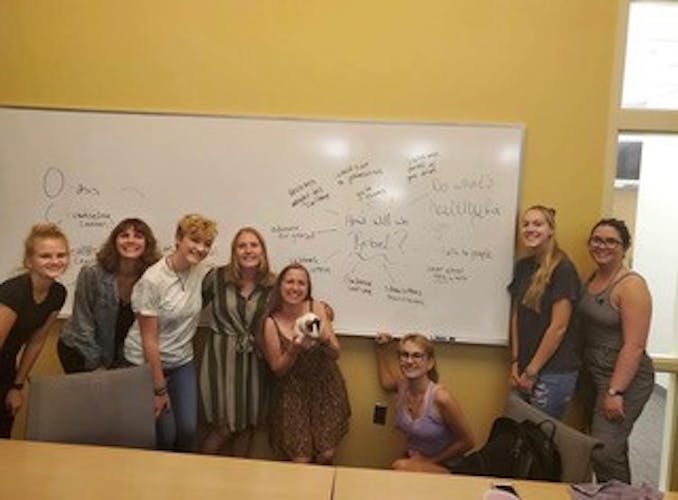 REbeL at American University, a club focused on body positivity and the awareness of eating disorders, has kicked off National Eating Disorders Awareness (NEDA) Week, which is a “big week for [their] club,” according to social media and outreach chair Hannah Peschier.

REbeL at AU is an extension of the now defunct national nonprofit REbeL Peer Education, originally founded in 2008. The AU chapter was founded in 2017 by AU alumna Serena Nangia, who had a chapter of REbeL at her high school and wanted to continue it at AU, according to Peschier.

“The mission of REbeL is to educate ourselves and others about body positivity and eating disorder awareness,” Peschier said. “It’s really just to create a space where people can come and share how they feel about themselves and their body. It’s a really great resource for anyone who’s in eating disorder recovery, as well. So we talk not only about body positivity, but body neutrality, and kind of just self-acceptance and self-love and self-care.”

Peschier said that body positivity is the idea that everyone deserves to have a positive body image, and that everyone’s body is beautiful, regardless of what our culture and society say. Body neutrality, on the other hand, means that one can exist without thinking of their body as positive or negative, neither loving or hating it, but accepting it.

REbeL has weekly meetings where members discuss topics ranging from body image in the media to eating disorder recovery. A group member will sometimes create a slideshow about a topic of interest to them, according to Peschier.

In addition to weekly meetings, the club puts on events throughout the semester. Many of the past events have included speakers and panel discussions about fatphobia, body image and racism, body image in the media, and eating disorder awareness.

NEDA Week, put on by the National Eating Disorders Association, occurs the last week of February every year. REbeL often does special events for this week, according to Peschier. These events have included an open mic night, a showing of the body positive comedy series “Shrill” and body positive yoga.

In the fall semester, REbeL invited Rachel Onefater, a representative from the Renfrew Center Eating Disorder Treatment Facility, to speak via Zoom about the work Renfrew does and how to be allies to people struggling with eating disorders, Peschier said in an email.

This year’s NEDA Week began on Monday, and REbeL is hosting several events throughout the week.

REbeL hosted a panel talking about its creation and goals on Monday and will have a body positive yoga session on Wednesday at 6:30 p.m. and an open mic night on Thursday at 6:30 p.m. All events are virtual over Zoom and open to anyone. Students can register through REbeL’s Instagram, where the Zoom links will be posted on the day of each event.

Peschier, who joined REbeL her freshman year at AU, said that she heard about it from the involvement fair and joined, and stuck with it because of the camaraderie it provided.

“I myself have struggled with eating disordered issues, so this was a community that has been really helpful to me, and I was kind of seeking out a community of people who have had a similar experience to what I had,” Peschier said.

Peschier also shared how REbeL has tackled issues of representation of body image in the fashion industry, including on models and in advertising.

Peschier talked about the importance of intersectionality in the body positive movement as well, and how REbeL has tried to incorporate conversations about this into its club.

“We have talked a little bit in the past about the intersection of body image and race, and how people who live as Black people who live in larger bodies are treated a lot differently than white people who are heavier,” Peschier said.

Despite the coronavirus pandemic moving clubs online, Peschier said that REbeL was able to “seamlessly transfer over to online” because of its small size and discussion-based activities.

Looking forward, Peschier said that she hopes REbeL can host more events, especially for next year’s NEDA Week, as well as bring in outside voices, like guest speakers from the mental health field who can offer expertise.