Eagles play first of two against Lehigh with a steady offense, faltering defense 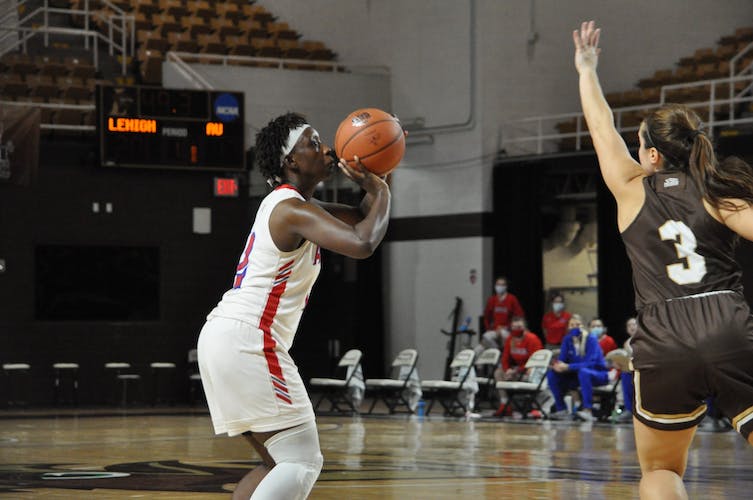 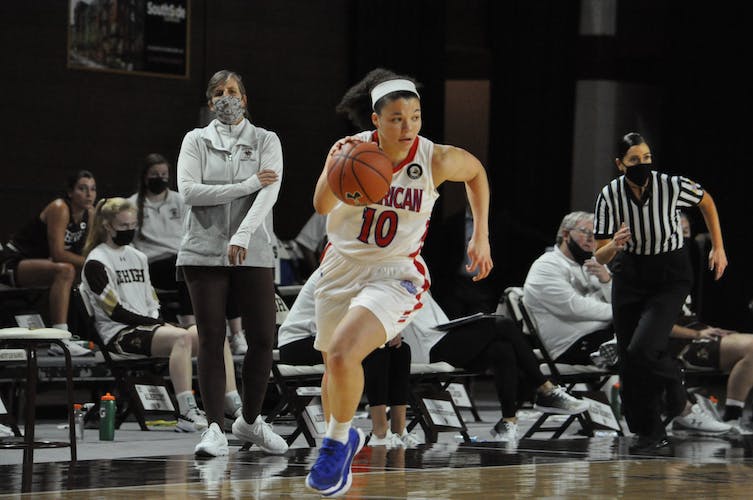 After 10 months without basketball, the American University women’s basketball team (0-1) made a late push against Lehigh (3-0) in the opener, but was ultimately unable to compensate for some early rust as the team fell, 79-70.

While the Mountain Hawks outscored AU in each of the first three quarters, the Eagles nearly eliminated a 21-point deficit in the fourth quarter, bringing the score to within three points with five minutes to play. But a trio of late 3-pointers from Lehigh and production from the Mountain Hawks’ bench unit ultimately sealed AU’s fate.

“Honestly, I think we just came with more of a sense of urgency in the fourth,” junior guard Jade Edwards said. “We sensed that the game was getting away and I think that’s all we needed. But obviously we don’t want to start that in the fourth quarter.”

While AU was initially scheduled to play at home, the game was moved to Lehigh due to the Capitol riots, according to head coach Megan Gebbia. While this matchup was initially scheduled as AU’s second doubleheader, its first two games against Loyola were postponed, as it was still awaiting the required test results to satisfy University and Patriot League testing protocols.

Coronavirus protocols make this season unique from the years past, with no fans in attendance and referees, coaches and bench players masked up. Eagles sophomore forward Karla Vres also wore a mask during the game, the only player on either team to do so.

AU operated with an “everybody-eats” offense, with no single player — including Edwards — dominating the ball at any point in the game. Edwards led the Eagles with 16 points and five steals, while freshman guard Ivy Bales and senior guard Indeya Sanders added 10 points apiece. Sanders also had seven assists.

“I think it was a good thing that we were able to score 70 points in the first game and then a lot of people coming in off the bench contributing,” Edwards said. “Obviously, we just can’t let Lehigh score nearly 80 points. But, for the first game in 10 months, it was better than expected.”

A string of wide-open outside shots helped the Mountain Hawks break out to a quick lead in the first quarter as they pulled ahead 26-17. The second quarter wasn’t much better for AU. Even a circus shot from sophomore forward Lauren Stack, which she converted without looking at the basket, wasn’t enough to spark a run. The stagnant offense limited the chance for AU to pounce on Lehigh’s coldest frame.

Stack earned the first start of her career, finishing with nine points and a team-high seven rebounds. She was part of a balanced offensive attack that saw six players finish with at least 8 points. AU had just nine active players.

Coming into the game, AU had plenty to fear in the form of Lehigh senior guard Mary Clougherty, who was named Patriot League Player of the Week last week after averaging 21.5 points, four rebounds and 3.5 assists in both wins over Lafayette.

But freshman guard Mackenzie Kramer led the way instead, scoring 21 points off the bench for Lehigh. Each team's presumed top weapon — Clougherty for the Mountain Hawks, and Edwards for the Eagles — focused on distributing early and were less ball-dominant than either team could have expected coming into the game. Lehigh’s secondary scorers exposed the Eagles’ weaknesses.

“Our defense isn’t ready,” Gebbia said. “We were late to every closeout, we didn't set our feet, we looked tired. It felt like we were a little out of sync, and I kind of expected that just because it's the first game.”

Gebbia opted to switch into a zone in the final frame, helping AU’s defense become a catalyst for its late run. The switch rejuvenated the Eagles’ energy, with freshman forward Emily Johns drawing a charge and Bales reversing for an acrobatic layup.

The impressive sequence from AU’s young players brought the game to within one possession before Lehigh made its final run of the game. Bales, in particular, showcased her ability to score from outside.

“Really happy that Ivy Bales could come off the bench as a freshman and score 10 points in her debut,” Gebbia said. “That was fun to see, just the energy that those freshmen brought when they got into the game.”

Coming into the season, Gebbia said this squad would have to pound the ball inside after the graduation of Kaitlyn Marenyi, AU’s top marksman. AU shot efficiently from outside, knocking down six of its 16 attempts, but the Mountain Hawks’ perimeter-oriented attack was too much to handle as they finished with 13 3-pointers.

Gebbia and Edwards both hoped that the red-hot fourth quarter would bring momentum into the second leg of AU’s doubleheader on Monday. AU is once again on the road against Lehigh in Stabler Arena, with tip-off set for 2 p.m.