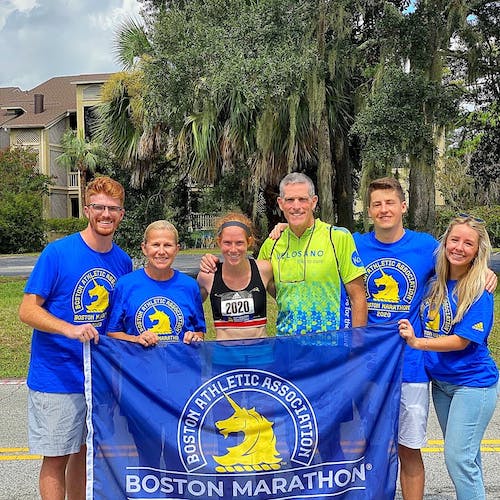 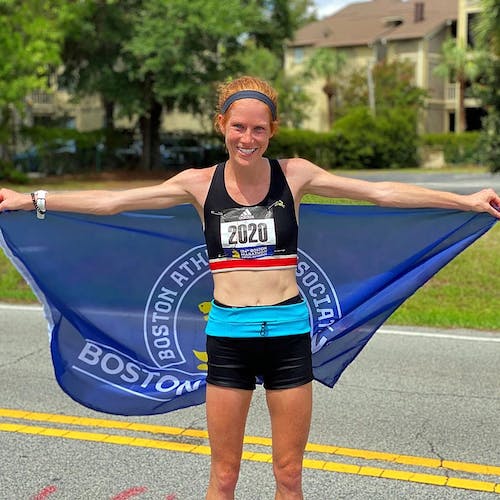 Megan Lavins’ path towards the 2020 Boston Marathon was an unconventional one. She didn’t start running competitively until after she graduated with a degree in finance from American University in the spring of 2018. But after just eight weeks of focused long-distance training, she competed in her first marathon, the New York City marathon, and ran a 3:14:41 time that would have qualified her for the Boston Marathon.

Less than a year later, she ran in the Northern Ohio Marathon, where she won the women’s division, finished third overall and officially qualified for Boston with a 3:00:54 run.

But then the coronavirus pandemic hit. The Boston Marathon, initially scheduled for April, was postponed to September. A marathon that usually hosts around 30,000 runners would now be held virtually, with runners setting their own courses and tracking their own times. But despite the delays and potential obstacles, and just two years of marathon experience under her belt, Lavins managed to finish the marathon with the second-best time overall among female runners. The run set a personal record (PR) of 2:48:54, as she finished less than four minutes off the qualifying time for the Olympic Trials.

Lavins ran the marathon in Hilton Head, South Carolina, while on vacation with her family, setting up the course with her father the day before she ran the race. And on Sept. 7, the first day of the week runners were given to run and submit their times, she ran by herself with her family supporting her.

“The one benefit that I’ve found from my training, since I’ve been home in Cleveland for the last few months, I’m used to running by myself. It really wasn’t that different from my training cycle,” Lavins said. “My dad and my mom are like my A-team, and my brother and his girlfriend were there, as well as my boyfriend, so it was really nice to have that support system there since there was no crowd for the actual race.”

Since runners competed in different locations at different times, it took a few days for results to come in, and for her to know just how well she fared against her competitors. Lavins used the Strava app and her Garmin watch to track her time and make sure there were no errors.

“I just kept refreshing the app and the leaderboards,” Lavins said. “At first I didn’t care, I didn’t think I would get a top result. But it was exciting to see, and it reaffirmed that I really want to take this sport to the next level.”

Her training for the marathon took place largely in her hometown in Ohio, where she has been living and working from home since the spring. Her plans were in limbo when the marathon was delayed, but Lavins believed it may have worked to her benefit. She suffered a minor injury in March and had to take a week off, and there was a good chance she wouldn’t hit the sub-three hours time that she was aiming for.

But with no races on the docket for a while, the time off following the cancellation allowed her to enjoy her runs without any added stress.

Though Lavins did not start running marathons until after college, it was her time at AU that was instrumental in starting her interest in running. When she arrived at AU her freshman year, she began running for 30 minutes a day, five days a week, and she has been running five days a week since. And during her sophomore year, she ran a half marathon, while continuing her normal running pattern. After she graduated, she moved to New York City to work at J.P. Morgan.

“I used to live on Cathedral Avenue, so running by the National Cathedral on Wisconsin Avenue, I loved that,” Lavins said. “And running down to Georgetown is awesome. I interned right by Dupont Circle, so on my lunch breaks I would run around the Mall. I never stop when I’m running, but I can’t tell you how many times I would stop and take pictures. D.C. is such a special place to run, and I really think that helped plant the seed with my joy for running.”

While her running career has gotten off to a great start so far, Lavins still has her eyes set on even bigger goals and continued improvement. She has begun the search for a personal coach and hopes to build towards a potential Olympic run. Given her progression, the odds seem to be in her favor.

“Seeing that the Olympic team has already been set for the upcoming Olympics, yes, I’m very focused on that,” Lavins said. “But I know I have until 2024, so really I’m just tuning in on how I can improve and start to get competitive with other distances as well and go from there.”