AU finances are not sustainable and neither are administration explanations

In a multimedia project, The Eagle reported on the current AU financial situation, and how students are working to fight for their financial futures. Any university student in the United States could tell you about how their school is too expensive and their financial aid isn’t enough.

American University is currently digging itself into a hole that seems impossible: if tuition continues to rise the cost will be $113,000 by 2040. This is a number that, whether University CFO Doug Kudravetz “expects” it or not is ridiculous. For students, issues of cost are perhaps what impact each of us most. When the University excludes student voices and ardently defends its choices, while not really explaining them, then they are not doing right by students.

Students are the only income source legitimately keeping this university afloat. The University is tuition dependent, putting the burden of paying personnel, utilities and, most relevant to students, financial aid on students. Everyone can agree that this is unsustainable for the University to continue doing. The University’s reasons given for this focus primarily on our small university endowment and low graduate school enrollment.

These issues are not in control of the students or even, in some ways, the University President’s cabinet. The burden, however, is on the undergraduate student body. Both challenges come down to the University not addressing issues quickly enough: creating alumni networks to grow the endowment, and not moving to only graduate school courses until more recently. Students are shouldering the burden of this inaction by the University with tuition dependency.

Administrators have said they recognize the need to address the lack of endowment growth; in President Sylvia Burwell’s five-year strategic plan, one goal is to “diversify and grow revenue.” But nowhere in that strategic plan does President Burwell suggest that she take a salary cut.

Personnel makes up the largest expenditure of the University, but assistant professors are paid less at AU than other D.C. universities, as previously reported by The Eagle. With this in mind, students may be left wondering if most of that portion of expenditure is going to President Burwell, Provost Daniel Meyers or other high level administrators rather than the people students actually interact with everyday: their professors.

Students who will be paying off loans for the rest of their lives are not going to be eager to pay even more money to go to graduate school whether or not they can “stay in their PJs” as Kudravetz put it. Or, maybe, they need to take online classes so they can go to work to afford the cost of attendance. Just a theory on my part.

John Douglass, professor in the School of Communications and member of the budget committee, commented “We came into this thing really late,” in reference to the lack of alumni funding. This too shows a lack of understanding about what kind of alumni the University is producing.

The University produces mid-level bureaucrats (The top employers listed on the home page website include the Peace Corps, EY and Deloitte) or non-profit workers who, while they may be doing great and important work, are not making the kind of money that involves sizable donations to their alma mater. These are alumni from before the University had such high costs, and future alums may find it challenging to donate after paying off their lifelong student loans.

There is nuance to the financial and budget conversations. Tuition increases also directly increase the amount of financial aid available for students. Higher education across the country is wildly expensive, as George Washington University and Georgetown University students can attest to as both universities have higher tuition costs. However, both universities have an endowment of $1.7 billion respectively while the AU endowment lags behind at $622 million in 2017. But AU is not doing enough to structurally fight for lower costs in higher education. How can they, when 82 percent of revenue is from tuition and fees?

Student voices regarding this issue have been commendable. While most students at AU may not be paying sticker price, the issue still stands that the University cannot continue to place the burden of operating costs squarely on students.

Unless there are real changes that acknowledge the reality of students, current and graduated, then tuition may just rise to $113,000 in 2040. Maybe if my loans are paid, then I’ll get around to donate a few dollars.

Samantha McAllister is a sophomore in the School of International Service and an assistant editor at The Eagle.

Satire: The Smirkshire accidentally triples cost of rent due to clerical error 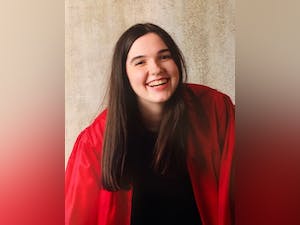 Opinion: “I Love Female Orgasm” was an empowering night tainted by male selfishness