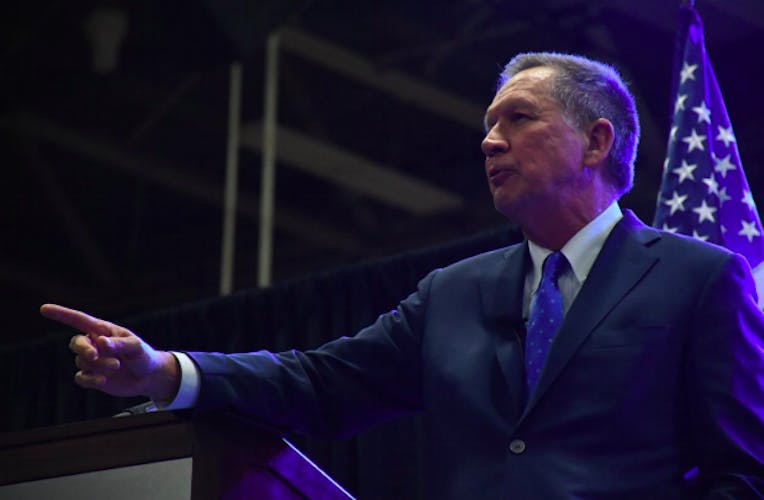 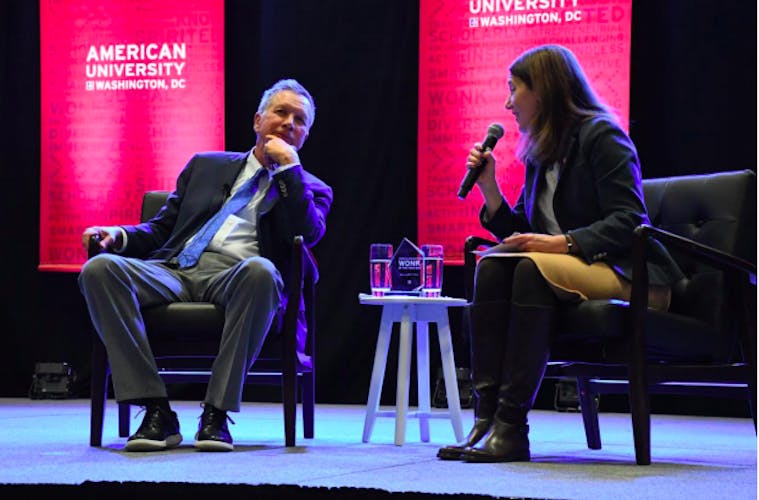 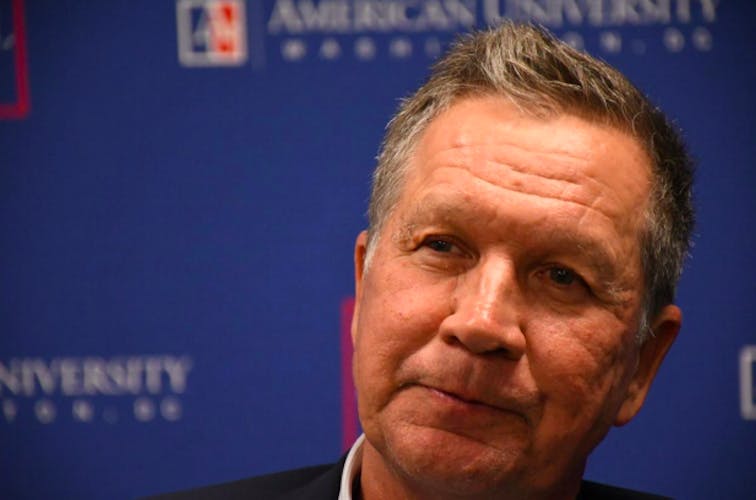 John Kasich, the former Ohio governor and 2016 Republican presidential candidate, accepted the Kennedy Political Union’s Wonk of the Year award at Bender Arena on March 21 and spoke about bipartisanship, student political involvement and the possibility of another presidential run.

Some students and alumni objected to KPU’s decision to pick Kasich on social media, citing his conservative record.

“I’m a conservative. So what?” Kasich said in an interview when asked about his thoughts on speaking at a liberal school.

In a statement, KPU Director Yazan Hanouneh said Kasich was chosen as the Wonk of the Year because it is meant to honor someone who is “an expert and knowledgeable in their field.”

“This year, we wanted to award someone who prioritizes bipartisanship and values reaching across the aisle,” Hanouneh said. “John Kasich had built his political reputation on coming together to find bipartisan solutions.”

Kasich served two terms as governor and ran for president on the Republican ticket three years ago. While he identifies as a Republican, Kasich emphasized the importance of bipartisanship and looking beyond a person’s party identification when engaging in discussion.

He said that he is not worried about the number of Democrats who are running for president in 2020, adding that “we will have to see how it all plays out.”

“I’m an American before anything else, Republican or Democrat,” Kasich said in an interview. “What I don’t like to see right now are the Democrats who have moved so far to the left that I’m not sure they would be competitive.”

In terms of another presidential run for himself, Kasich said that his “options are on the table,” but he wouldn’t run if he didn’t think he could win.

When asked by an interviewer about President Donald Trump’s administration, Kasich responded: “Have normal people holding public office. That’s all.”

He joked about not getting these types of answers out of most people, saying that he doesn’t “really care much about a person’s political party” and that what he is most interested in are people with strong principles and beliefs.

Kasich continued to speak on party divides that occur under presidential administrations during the event, stating that “presidents don’t matter that much” in terms of legislation or people’s daily lives.

“They can affect our mood, they can affect certain things to come, like what to do with the border and who to kick out of the country, but at the end of the day, that’s not what affects you,” Kasich said. “What affects you are the people you live around, your roommate, your mother, your father, where you live, what you do on a day-to-day basis, the things that you’re interested in and care about.”

"In the end, presidents don't matter that much…what affects you are the people you live around…the things you're interested in. In one significant way, you matter. You know how Sylvia and I stopped the repeal of Obamacare? Not with politicians, it was the people," Kasich said.

Kasich warned AU students, who attend one of the most politically active universities in the country, not to get locked into a political career.

“Acquire some skills that are real and make something of yourself and then you can dabble in politics,” Kasich said in an interview. “It’s better not to just get locked in there for 20 years and you can’t get out. If you want a career in politics, maybe you should major in English or psychology, something where if this whole political thing doesn’t work out, you’ve got somewhere to go.”

The biggest danger is cutting off opportunities, Kasich said, but he feels optimistic about the future as a result of well-informed and engaged millennials. The central lesson he learned from his presidential campaign, Kasich added, is that politics is not really about the issues.

“It’s about letting people know that you care about them and that we all need to slow down and engage,” Kasich said. “The other day, I was coming out of the gym and this guy asked how I was. I said, ‘I’m fine, how are you?’ and he never answered. He was in a hurry. He wasn’t interested in how I was doing. So if we slow down a little bit, we find that we have a better life instead of speeding through everything.”

"When we become resilient we are becoming a more unique and interesting person. Get out of your silo. There's nothing more boring than people who can't listen," Kasich said.

Ultimately, Kasich said in an interview that he loves speaking at college campuses because he wants all the students to do well and “realize their hopes and dreams.”