Fossil Free AU, a student group dedicated to persuading university leaders to divest AU’s financial stake in fossil fuels, has increased its efforts to pressure the University through protests and the launch of a “responsible endowment fund.”

The fund, according to FFAU member Gracie Brett, a senior in the School of Public Affairs, is a “tool to compel the University to divest” the money it currently has in fossil fuel industry stock. AU has approximately $19 million of its $650 million endowment invested in fossil fuels through commingled funds in the S&P 500’s energy portfolio, said Doug Kudravetz, AU’s chief financial officer.

FFAU encourages donors to the University to instead give money to the fund, which will then be held until the University either decides to divest or the time limit runs out on May 31. If AU announces it will divest, the money will be given to the University in compensation for selling its stock in fossil fuels.

Brett said that if AU does not divest by the end of May, money from the fund will be dedicated to new scholarships for AU students who demonstrate interest and dedication to renewable energy.

“We’re trying to compel the University to be a little nervous about the prospect,” Brett said. “There’s a lot of symbolism involved. We’re hoping that donors will start to realize where their money is going to.”

The fund, run through GoFundMe, is part of the group’s recent efforts to inject energy into the divestment movement on campus. The Board previously voted unanimously against divestment in 2014, and University President Sylvia Burwell told FFAU representatives in January that she would not support divestment.

“It’s not until they are threatened in a real way that they will really change their ways so students need to be brave and should not be afraid to say something when things are wrong,” Brett said in a February interview.

In the six weeks the fundraising campaign has been online, it has not received a donation. Brett said that to raise money, FFAU is reaching out to donors and alumni via phonebanks, email and direct mail.

Brett added that the fund, inspired by efforts at other universities to pressure their administrations to divest, would only happen once instead of recurring every year.

“It needs an expiration date to make it important,” Brett said.

In addition to launching the fund, FFAU also staged a protest during the quarterly meeting of the Board of Trustees on Nov. 15, standing with signs in the freezing sleet and snow outside the Constitution building. Two representatives from Fossil Free also met with Board of Trustees members on Nov. 16 in an attempt to to address the issues surrounding divestment.

“You can’t claim to be a leading institution in sustainability if you’re still making a profit off the industry that's affecting climate change,” Miranda Dotson, a sophomore in the School of Public Affairs and a representative of FFAU, said.

A dozen Fossil Free representatives chanted “What do we want? Divestment! When do we want it? Now!” for more than a half hour outside the meeting.

The next day, Dotson and Mark Lu, sophomores in SPA, met with Kudravetz, along with Board of Trustees Chairman Jack Cassell, Vice Chairman Marc N. Duber and Board Secretary David Taylor in an attempt to address the myriad issues surrounding divestment. Both FFAU members and board representatives said the meeting was cordial but said they failed to make significant progress on the issue. 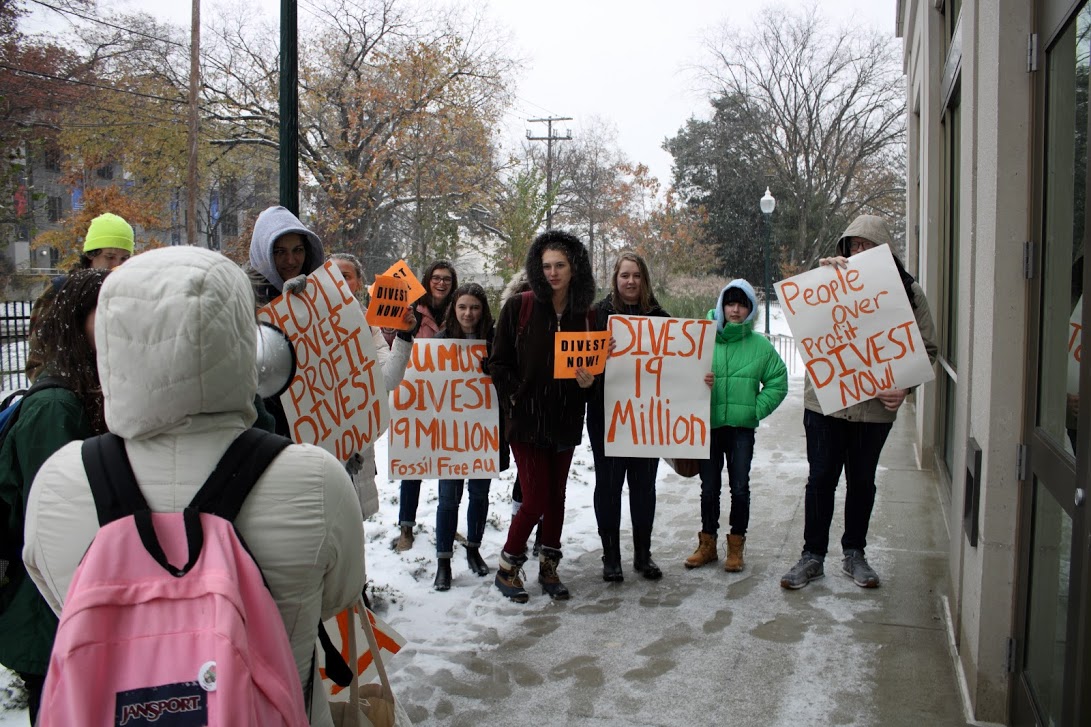 Members of Fossil Free AU protest during the quarterly Board of Trustees meeting on Nov. 15. DAN PAPSCUN/THE EAGLE

Lu and Dotson commended the Board for the steps that AU has taken so far, including increased energy efficiency by rebuilding the hot water pipes around campus and some investment in renewable energy, but said it’s not enough.

AU wants to be known as a “cool school,” Dotson said, but hasn’t taken the steps to be able to call itself a leader in renewable energy.

“It’s one thing to say, ‘Hey, we’re being more cost-efficient with how we’re operating and that’s environmentally friendly,’ and it’s another to say ‘We really care about the environment and being… leaders in sustainability and climate change mitigation,’” Dotson said.

“[The Board] was pretending to be amicable,” Lu said. “The Board doesn’t see divestment as worth the cost [of shorting].”

The way AU handles much of its invested endowment is to put it into shares in the S&P 500, one of the most successful indexes in the financial market. There, Kudravetz said, the money is put into different commingled funds — funds that have small investments in a wide variety of stock.

Kudravetz said that this way, there’s a wide exposure to many different types of stock, which increases the odds of making money, but that exposure is relatively shallow, reducing the risk of losing much from unexpected market fluctuations.

One of the results from investing in commingled funds is that the money within those funds is divided among many different portfolios — in this specific case, much of it is in the energy portfolio of the S&P 500. Within that energy portfolio, some is in renewable forms of energy, but some is invested in fossil fuels.

Due to the commingled nature of the investment it is difficult to simply remove the funds that are invested in fossil fuels, Kudravetz said. The entire fund would have to be broken up and redistributed, something university officials say they do not want to do.

Kudravetz and Cassell said that the Board’s primary goal is to make money for the University, to grow the endowment and that fiduciary responsibility is what drives their investment philosophy. Because of this, Kudravetz said, divestment is not an option as it would hurt the University financially, costing $1.1 million in management fees every year after divestment.

The cost of divesting might hurt the money that the University puts into scholarships, as the endowment would shrink as the stocks are sold, Kudravetz said.

Dotson and Lu refuted this claim, saying that there is no evidence that the money currently invested in fossil fuels goes toward scholarships and therefore no negative impact on financial aid to students.

Moving forward, the organization plans to continue its divestment campaign, Dotson and Lu said. The responsible endowment fund has several months left before the deadline, and the group is currently planning other endeavors surrounding divestment, such as a zine publication to increase awareness of the issue on campus.

With more than 70 members, 30 of which are core staff, Fossil Free organizers continue to work to grow their presence at AU. The group also made waves earlier this fall by chalking “Divest $19 Million” and related slogans outside several campus buildings.

“True sustainability comes from a non-reliance on the fossil fuel industry,” Dotson said. “It comes from actively having an anti-fossil fuel or anti-carbon stance, which currently the University does not have.”