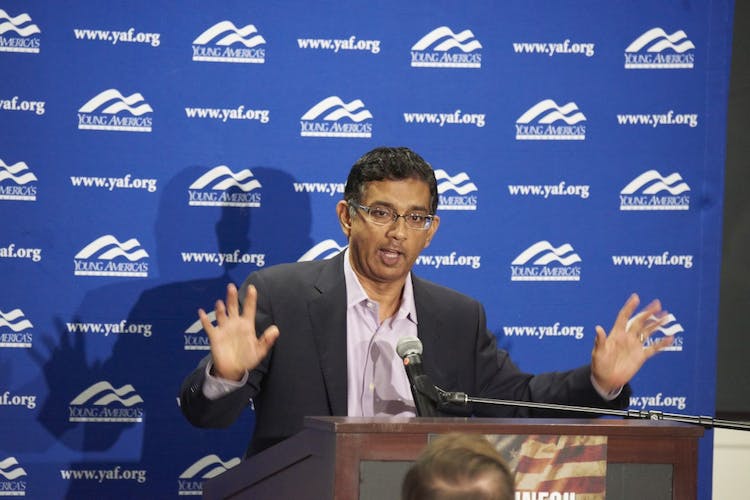 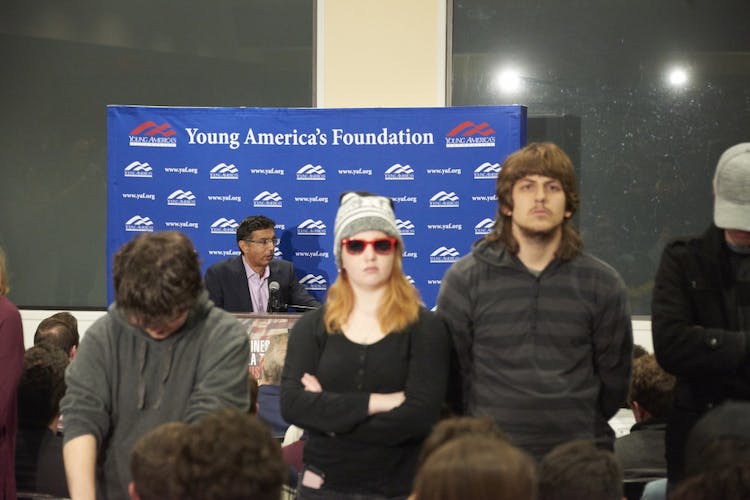 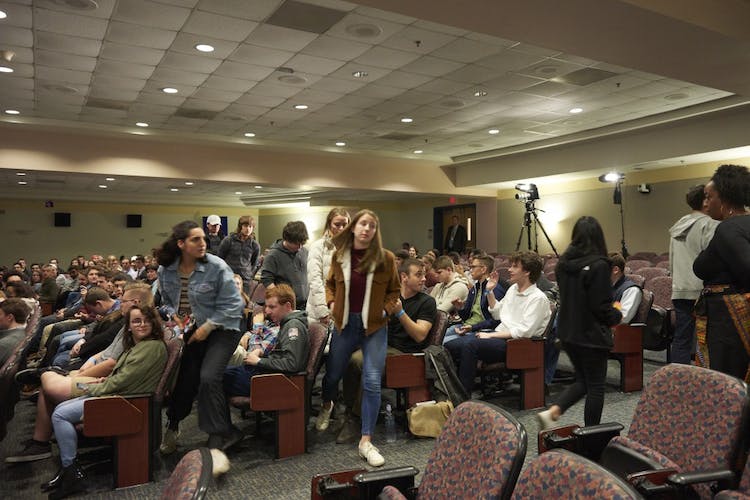 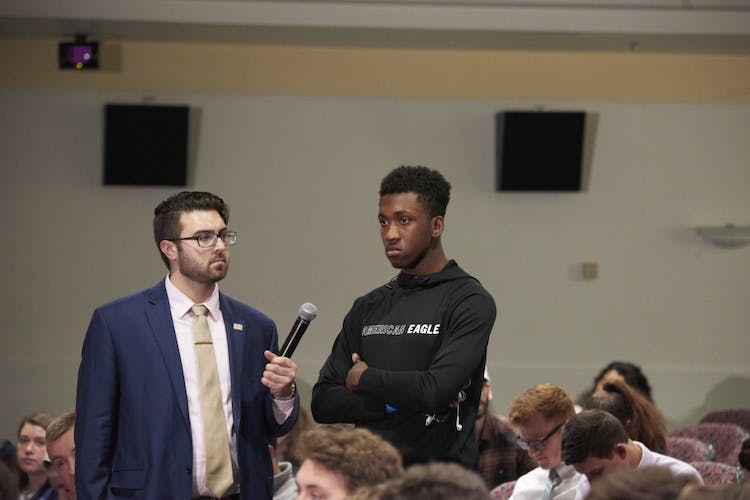 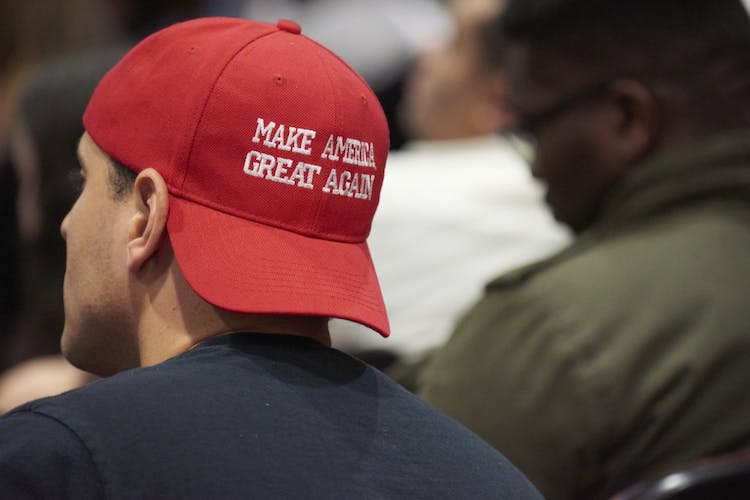 Racism, fascism, the midterm election results and “fake history” were among the topics that controversial right-wing commentator and filmmaker Dinesh D’Souza discussed at a Young Americans for Freedom event Wednesday night, drawing an audience of both protesters and supporters.

Students and non-AU affiliates stood in a line outside of Kerwin Hall on Nov. 7, waiting to hear D’Souza speak on “fake history” in President Donald Trump’s America. Make America Great Again hats and Trump regalia were donned by multiple audience members. One student, who declined to be named, said that this was the only time he felt comfortable wearing his Trump shirt because “it’s just not worth getting into fights with liberals at AU.”

D’Souza began his lecture by stating that America today is more “fractured” and “divided” than in any time since 1860, in reference to the results of the recent midterm elections.

“For the Democrats, the good thing that happened to them is the capture of the House,” D’Souza said. “It gives them a chance to launch investigations, and of course they can pass legislation, but it’s going to go nowhere.”

A prominent theme of D’Souza’s lecture was that despite popular opinion, racism and fascism are rooted in the Democratic Party, stating that “fake history” distorts Americans’ views of the Republican Party today.

Though there were clear supporters of D’Souza in the audience, the speech did feature some protests. Nine students sitting in the middle of the venue stood up silently and turned their backs on D’Souza about 12 minutes into the event after he called Dr. Christine Blasey Ford, a professor who accused Supreme Court Justice Brett Kavanaugh of sexual assault, “a complete nobody.” About 15 minutes later, the same students interrupted D’Souza as he was equating socialism to fascism, repeatedly chanting, “We believe Dr. Ford.”

D’Souza engaged with the protesters after allowing them to chant a few times, interrupting them with the question, “Where is Dr. Ford?”

“I noticed that when Roy Moore was attacked by all those women, suddenly, when he’s defeated, they all melt into air,” D’Souza said.

Members of the audience vocally objected to this statement, and when a student shouted that he was defending fascism, D’Souza responded, “No, I’m exposing you as a fascist,” which was met with applause from some audience members.

“The problem is, sometimes you get speakers like me who are not scared of people like you,” D’Souza said to the protesters. “I recognize that, ultimately, you are afraid of ideas. You’re not willing to engage with me.”

When the protesters walked out, several audience members applauded, and D’Souza said “intellect is suppressed” by the “combination of anger and ignorance” expressed by the protesters.

Miranda Dotson, a sophomore, said she protested the event because while AU prides itself on being a “safe campus for marginalized communities,” hosting D’Souza undermined the idea of safety.

“Hosting Dinesh D’Souza is arguably a free speech and open discourse flex on the part of American University,” Dotson said. “Yet, by providing a platform for an individual known for his speech that is controversial in its hateful and demagogic undertones, the event stands in direct opposition to upholding the value of a safe campus. Unlike Mr. D’Souza, the ‘leftists’ who attended the event in protest believe women, recognize that the left exists beyond party lines and beyond the repressive state.”

Audience members also objected to D’Souza’s belief that the “fascist streak in American politics is predominantly on the left.” D’Souza said that Americans have been subjected to a “massive public relations con” in which they were made to believe that neo-Nazis and the Klu Klux Klan were home to the right wing when the Democratic Party has always been the home of racism.

Several history professors have refuted the idea that the Democratic Party was unique in having Klansmen among its membership. “Klansmen were influential inside both major parties, pushing racism, nativism, Prohibition and especially anti-Catholicism” at the group’s peak in the 1920s, according to a March Washington Post article.

During the question and answer session, attendees of the event asked questions primarily about D’Souza’s controversial views, and his answers to some of the questions stirred surprised reactions from the audience, especially when he said the Kavanaugh hearing was a “staged event to destroy an innocent man.”

In an interview a week before the event, Jenna Brink, YAF’s communication director, said that YAF would deal with interruptions in an organized manner. AU police were on standby as well but did not intervene with the protests.

In a statement released by YAF shortly after the event, they said that they are “pleased with the outcome of the event” and stand by their decision to host D’Souza.

“D’Souza delivers a message that often goes unheard by college students, nationwide,” the statement said. “Classrooms can easily become echo chambers when ideas are not diversified which serves as a disservice to all students. As principled conservatives, we continue to focus on finding the truth behind much of the political rhetoric so commonly used, on all fronts, and are never willing to sacrifice our principles -- even in the name of bipartisanship.”

The statement also apologized that not every student had a chance to get their questions answered, and said that all students were asked to leave immediately after the event for security reasons. Threats were not made by any YAF member, and “any allegation stating otherwise is untrue.”

However, Tom Lebert, a sophomore in SPA, said in a Facebook post that after the event, he confronted a YAF executive board member about D’Souza’s denial of the LGBT community being targeted in the Holocaust and wanted to know why YAF was OK with having a person speak who “essentially denied a part of the Holocaust.” After asking the question, Lebert said he was asked to leave the event by an executive board member.

“It wasn’t said quite that kindly, and I believe a few swears and names were thrown in,” Lebert said. “I find it hypocritical that AU Young Americans for Freedom operates under the guise of being open to other ideas and speech, but members insult you and walk away when you try to engage them.”

D’Souza closed his remarks by emphasizing the importance of debating history because, he said, much of what is considered history today comes from a progressive bias.

“Ultimately, it’s about debate, but debate can only occur in an atmosphere of freedom,” D’Souza said. “My only objection to the students who were yelling just a few moments ago is that they don’t like the atmosphere of intellectual exchange. They feel that they have a certain moral right to trump dissonance … and you should be very intolerant of that kind of intolerance.”

LOOKBOOK: Fun fall outfits to expand any wardrobe and prepare for the cool months ahead