You don’t have to go far for films and popcorn

This fall has proved to be a good time for movies. Whether you want to go to the theater because of all the buzz about movies like “Battle of the Sexes” or you want the classic “dinner and a movie” date, going to the movie theater is the perfect pastime. The only question is: Which theater? Since there are so many options for theaters in D.C., here are a few suggestions that are all close to Metro’s Red Line stops so that a good movie is only a ride away.

Although The Uptown Theater only has one screen, it makes a commitment to quality over quantity. Freshman Niamh Burns went to the theater just a couple weeks ago.

“[The Uptown Theater] was kind of old fashioned,” Burns said. “It was the typical theater, but it was a little more old fashioned with older seats and older light fixtures.”

This made the theater more unique, she said.

The tickets are normally around $12, but the theater does offer a student discount of $10 per ticket with an AU ID card.

If you are in the mood for shopping, Chinese food and a movie, the Regal Gallery Place theater is for you. Although the theater is a little hard to find because of the shops that are in the mall beneath the theater, the staff are exceptionally helpful when helping customers enter and exit the building. The theater offers a variety of movies, snacks and reclining seats. Average ticket prices for this theater are about $13.

Although the Avalon Theater is a 15 minute walk from the Friendship Heights metro station, those who make the trip are most likely attending because of its reputation. The Avalon is “the oldest operating movie house in the area,” according to the theater’s website.

It’s the only nonprofit film center in D.C., meaning that the theater’s primary goal is to “entertain, educate and inspire the people of metropolitan Washington, D.C.,” according to its website.

Bill Oberdorfer, the executive director of the Avalon Theater, noted that some of the draw to the Avalon comes from the arthouse-type films that they show.

Although it doesn’t have a lot of variety with only two screens, the theater shows films that may not be shown anywhere else in the area. The average ticket price is $12.50, but can be reduced to $10 with an AU ID card.

This Bethesda theater offers a variety of movies and is easy to find. Victoria Hux, a Bethesda resident, recently saw “Blade Runner” there and noted several positive experiences at the theater.

“When I go, I’ve never been in [a seat] where I couldn’t see,” Hux said. “The screen was big enough. Even if you're behind someone, you can still see.”

Hux also noted that moviegoers can reserve their seats online ahead of time.

If you feel left out of the pop culture loop or want a night out with your friends, never forget that the movies are always an option. What’s even better is knowing that some of the coolest big screens are just a couple Metro stops away. So, next Friday or Saturday, don’t hesitate to use your U-Pass and follow the red line to the stars─stars being Brad Pitt and popcorn, of course. 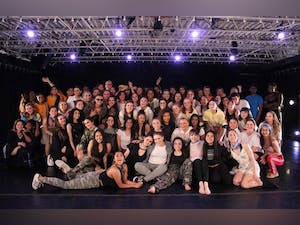 On National Dance Day, five AU dancers reflect on what dance means to them

Satire: Wonk Cat takes semester off to backpack through Europe