While it wasn’t the inauguration freshman Anthony Kuykendall had hoped for, he didn’t want to miss the chance to attend

Standing in a sparse crowd of red “Make America Great Again” ballcaps was School of Public Affairs freshman Anthony Kuykendall, the AU College Democrats deputy chief of staff. He found himself sandwiched between Donald Trump supporters and a man holding up a makeshift Black Lives Matter sign, which drew the criticism of onlookers, who exchanged shouts and snide remarks.

“I thought there’d be more people here like me,” Kuykendall told The Eagle at that moment, thinking of other quiet attendees. Most of his fellow AU Democrats chose not to attend the inauguration, Kuykendall said.

Kuykendall said he chose to take a stand by not getting a ticket to the ceremony, opting instead to stand in the non-ticketed section, though he decided not to protest.

Though he campaigned on behalf of Hillary Clinton, Kuykendall said he thought it was important to attend the inauguration since he “made the trek” from Orange County, California to AU for these types of experiences in D.C. Even if he doesn’t agree with the policies of the incoming administration, he wanted a firsthand glimpse of the day’s events.

Kuykendall left AU at 6 a.m. anticipating large crowds swarming the National Mall and the Capitol Building. However, he was easily able to get to the front of the non-ticketed section, and the empty spaces in the crowd gave him hope that many other Americans reject Trump’s views.

“All of that white [flooring] in front of me makes me happy,” he said.

Shots from the mall as our reporters wait for the ceremony to begin pic.twitter.com/ACLRCMlGkr

Later in the morning, Kuykendall gravitated toward a few more like-minded individuals who were interested in attending the event although they did not support Trump. Throughout the swearing-in the group gave applause to all of the Democrats present, such as Barack Obama and Hillary Clinton, who were met with loud boos by the majority of attendees around him.

After almost six hours of waiting for the inaugural address, Kuykendall found the speech underwhelming.

“It sounded like uninspired populism,” he said. “The things that were supposed to get huge applause were just ‘okay’.”

However, Kuykendall said that it was worth going to see democracy in action.

“I really didn’t agree with any of it and was horrified by some of it, but it’s important to realize that still exists in America,” he said. “If anything, it made me more motivated to fight for what I believe in.” 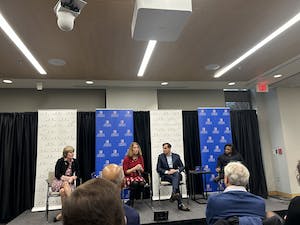 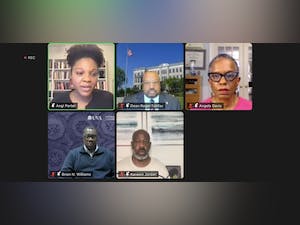