After starting 0-6 in conference play this season, the Eagles hit a hot streak, winning nine of their final twelve games to finish the season with an even record of 9-9 in league play. The Eagles earned the six seed in the Patriot League Tournament and travel to play Boston University this Thursday. Beating the Terriers won’t be easy. In fact, the Eagles haven’t beaten Boston since the 2014 Championship game two years ago. Here are some keys for AU to make a deep tournament run like they have the past two years.

The Eagles need the three-pointers in games to be successful and open up the rest of their offense. In almost all of AU’s wins, the team has shot the ball well from beyond the arc. The Eagles shoot 35 percent from three, but they will have to do better if they plan on competing for a championship. Here is a list of AU’s wins plus its games against Boston and how well they shot from three point range.

Aside from the win against Holy Cross, which was a defensive slugfest, AU has hit at least six threes in all of its wins. Unfortunately, six may not be enough come tournament time. Eight is a solid benchmark became it is both reasonable and effective. This obviously does not mean AU should abandon its offense and start jacking threes all game. For instance, in the loss against Boston, the Eagles hit nine threes but needed 29 attempts. If this team starts getting hot from three, more driving and cutting lanes will open up as defender move in to help, resulting in a more effective “Princeton Offense.” 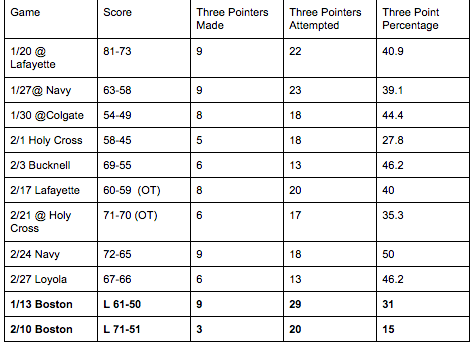 2. At least one role player has to step in the scoring column.

AU’s two leading scorers, senior guard Jesse Reed (13.6 ppg league play) and freshman guard Delante Jones (14.2 ppg league play) must be effective scorers every night for AU to stand a chance in advancing through the tournament. They have both been incredibly consistent for the Eagles down the stretch, and the team will be counting on their abilities in post-season play. While Reed and Jones both need to play well, AU will also need its role players to step up even more and provide additional scoring. Asking two players to carry the offense is too much and will not be successful. Here are how role players have stepped up in each of AU’s wins.

In almost all of AU’s wins, at least one role player has scored in double figures. The Eagles, this season, have their deepest team under head coach Mike Brennan, and AU has an established eight man rotation. Aside from the two stars, everybody needs to play up to their potential with at least one of the role players having a big night in order for AU to experience success. As seen in the wins, it can be junior guard Jalen Rhea who has a big game one night, or freshman forward Andrija Matic, but AU will need one of its additional players to rack up points on the stat sheet if they hope to secure a victory. If none of the role players are contributing, teams can just load up on Reed and Jones, making it harder for them to score. When everybody on the court is aggressive and looking to shoot, things become easier for the Eagles.

*Rhea did not play in seven of the 18 conference games. 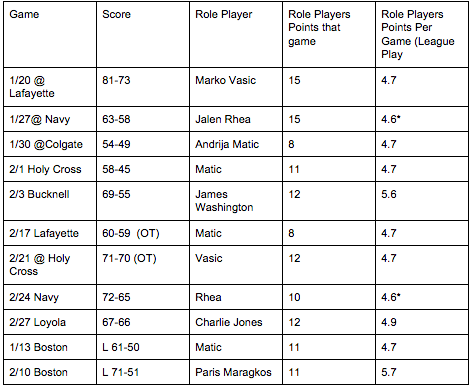 3. Don’t get outmatched in the rebounding game.

The Eagles have a -3.9 rebound margin per game. In other words, on average teams out-rebound AU by four during a game, and only Holy Cross and Lafayette are worse in the category of rebounds among Patriot League teams. The Eagles don’t necessarily have to win the battle of the boards, but again, they can’t get completely overwhelmed giving up second chance points.

This chart shows all of the Eagles wins and how they fared in rebounding.

The Eagles have not lost a conference game this season when they out rebound their opponent. While it would be nice if the Eagles could rebound at their potential in all games, strong play under the boards should not be expected.That being said, the Eagles just need to stay competitive and not give their opponents multiple opportunities. 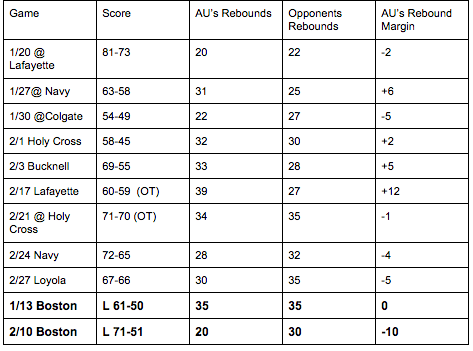 4. Turn the ball over as little as possible, especially live ball turnovers.

At the beginning of the season, turnovers plagued the Eagles, and the recorded multiple games of 20 or more turnovers. Right now, the Eagles average 14 turnovers a game. If the Eagles turn the ball over 14 times in a playoff game, they are going to be in big trouble. This graph shows the Eagles wins plus the games against Boston and how many turnovers they had that game.

Turnovers are inevitable. However, the Eagles must make smart decision and control possession as much as possible if they want to advance in the tournament.. Live ball turnovers, where play continues and the other team immediately gets the ball, are even more deadly because they often lead to fast break opportunities and easy points. If AU can limit itselves to about ten turnovers or less, they should be in good shape. If they turn the ball over closer to twenty times, things could get out of hand. 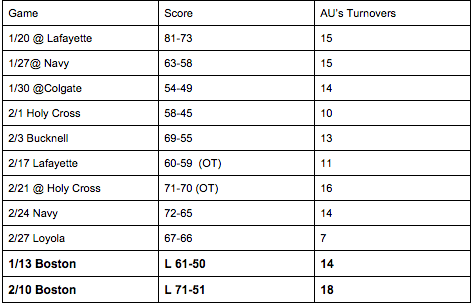 5. Staying out of foul trouble

The Eagles have generally done a good job of staying out of foul trouble, but this trend must continue, especially given how Brennan ideally likes to play Reed and Jones the entire game. Brennan also likes to occasionally take risks and leave his players out on the court with multiple fouls. Reed and Vasic have been know to take charges and draw offensive fouls throughout the season, but they must control this trend. At times, their aggressive play can be beneficial, as it draws fouls on opponents as forces a turnover. However, often times it leads to “and-ones” as the player taking the charge does not have his feet set. The Eagles will need to play both hard and smart to avoid picking up unnecessary fouls and make sure the stars of the team can stay on the court as much as possible.