Woodwinds, brass, percussions. To some, an orchestra simply creates music and produces appealing sounds. However, to AU orchestra conductor Yaniv Dinur the goal of his students centers on one specific point: to create an interaction. Music, he said, at its basic core, involves a relationship between a listener and a composer, and he sees his job as a facilitator of those interactions. This Saturday and Sunday, Dinur’s work will come alive, as the AU chamber and symphony orchestras perform, “Mainly Mozart,” a show in the Abramson Family Recital Hall that opens and closes with Wolfgang Amadeus Mozart.

The concert opens with the overture to the opera, “The Magic Flute,” composed by Mozart in 1791 that describes a fairy tale and a handsome prince. Although the theme may be cliche, Mozart’s music employs a unique sound to tell the story of the prince, Tamino and his quest for perfection.

“It’s one of the most beloved pieces,” Dinur said.

Following “The Magic Flute,” the chamber and symphony orchestras will play Edward Elgar’s “Serenade for Strings.,” a piece written in 1892.

“We are performing ‘Serenade for Strings’ to show off our string players,” Dinur said. “This piece is completely different. It’s very romantic and it’s very emotional.”

The orchestras will then perform “Conga Del Fuego Nuevo,” a song composed by Mexican composer Arturo Marquez. This modern piece incorporates Mexican rhythms, and the orchestras will perform the piece with congas and bongos.

The orchestras will perform Mozart’s “Sinfonia Concertante for Violin and Viola” as its second and final act . Married couple Teri Lazar and Osman Kivrak, who work in AU’s music department, will join the orchestras by playing violin and viola.

Mozart wrote “Sinfonia Concertante for Violin and Viola” piece in 1779 during a trip through Europe in the classical era. The genre sinfonia concertante integrates the art of the symphony and the concerto. A symphony, a piece of music written for an orchestra, is distinguished in its algorithmic approach with usually four movements. A concerto usually comprises three movements, and is usually written for a solo instrument accompanied by an orchestra. While Mozart isn’t the first composer to write a Sinfonia Concertante, his experimentation in the genre attracted massive acclaim. This piece is unique in its rich, riveting conversation between the violin and the viola.

Dinur, who has been conducting since the age of 16, sees his role as conductor as a more minor part of these relationships and conversations.

The concert will take place in Abramson Family Recital Hall, Feb. 27 at 8 p.m. and Sunday Feb. 28 at 3 p.m. Tickets are $10 for the public and $5 for students, seniors and the AU community.

Clarification: A previous version of this article used the word "symphonic band" to describe the group performing the music, and this has been changed to orchestra. 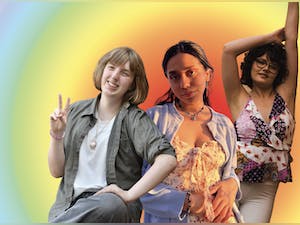