Despite Lauren Crisler’s second consecutive double-double, the Eagles suffered a loss to the Crusaders Saturday afternoon

AU junior forward Lauren Crisler recorded a team-high 15 points and game-high 14 rebounds on Saturday afternoon, but even her second consecutive double-double could not propel AU past Holy Cross. The Eagles fell 59-50 at Bender Arena, suffering their twentieth season loss.

Despite being the first team on the scoreboard at the start of the game, the Eagles trailed by four after the first quarter and never recovered. The team pulled within one point before the halftime break, but effective ball distribution by the Crusaders and defensive prowess ultimately determined the outcome of the game.

“I thought we came out and showed a lot of hustle, a lot of heart,” AU head coach Megan Gebbia said. “We came up short again, and I think part of that is due to the fact that we had some turnovers late in the third quarter. We have to find a way to come out of halftime and sustain the type of effort that we give in the first half.”

Turnovers plagued the Eagles throughout the game. AU gave up 15 turnovers to Holy Cross, most of which resulted from passes being picked off by their opponent. The Crusaders scored nine points off the turnovers, and those nine points proved to be the difference in the game. The Holy Cross’ defense also combined for ten steals, with sophomore guard Infiniti Thomas-Waheed and senior guard Lisa Mifsud securing three each.

Offensively, Holy Cross recorded assists on 14 of its 25 made shots, three of which included three-point field goals. AU, on the other hand, struggled moving the ball around, notching only seven team assists, four made by sophomore guard Maria Liddane.

Led by Crisler, the Eagles outrebounded the Crusaders 42-27, including a 9-5 edge in offensive rebounds, and the team combined for eight second-chance points compared to three from Holy Cross. The Eagles also strung together points from eight players, creating a balanced scoring effort. In contrast, three Holy Cross players combined for 17 made shots of the team’s 22.

As the season winds down, AU has three more games left until the Patriot League tournament. The Eagles next face fourth-seeded Navy Feb. 24 at home and will be looking to snap a three-game losing streak to remain competitive heading into the tournament.

“It will be interesting with Navy because it will be our first time playing them this year,” Gebbia said. “I think our advantage is inside against them, and being able to defend middle penetration because that’s what they do.”

In spite of the loss to Holy Cross, Gebbia feels optimistic looking ahead to March.

“I think we can turn it around and feel good about ourselves,” she said. “It’s getting that feeling of ‘we can do this’ as a group. It would be great to win three out of the next three - or at least two of the next three games. We want to go into the tournament with a little more confidence than we have right now.”

Correction: A previous version of this story incorrectly listed Lauren Crisler's year. Crisler is a junior. 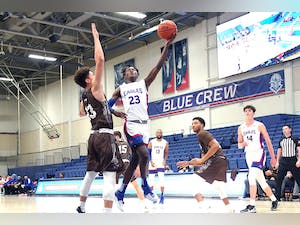 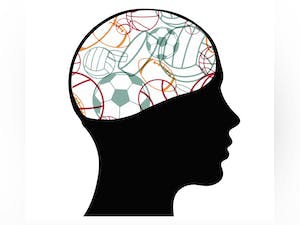 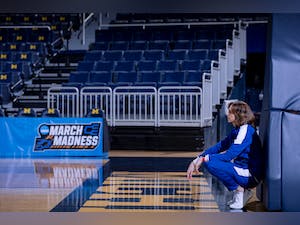