As the new Assistant Director of Fraternity and Sorority Life, Colin Gerker hopes to empower students, foster a community and a commitment to service and philanthropy and correct misconceptions about Greek culture.

“The goal is to enforce accountability for a safer, healthier environment and to uphold the values that these organizations are supposed to be promoting,” Gerker said. “It [Greek life] was never meant to be a drinking club, it was about students taking an oath, promising to better themselves.”

Gerker was hired in May 2015 after the former person in his position, Curtis Burrill, left for a new job last academic year.

While attending college at the University of Dayton, Gerker was a member of the Beta Theta Pi Fraternity, but his main extracurricular priority was serving as the vice president in student government.

Late in his graduate career, when he volunteered as an advisor for his former chapter in Dayton, Gerker began considering Greek life as a path to a career.

Before volunteering with Beta Theta Pi, Gerker said he had wanted to be a therapist. However, he fell in love with the chapter values that he saw in his volunteer position and the idea of a group of people being able to positively impact its community.

“It [Greek life] is about building a community of socially-just thinkers and doers” Gerker said. “The bottom line [is that] this is your home away from home, a family away from your family.”

Gerker followed this passion for Greek life by working for Beta Theta Pi Fraternity Headquarters in Oxford, Ohio as an expansion coordinator before taking a job at the University of California San Diego. He was a Greek Life Advisor at UC San Diego from 2013 until coming to AU this fall.

As assistant Greek director, Gerker emphasizes the importance of Greek life in any community, including AU. Greek life is involved with service, philanthropy, managing risk, focusing on academic achievement and living its values, he said.

At UC San Diego, a campus climate survey found that students were three times more likely to be satisfied with their college experience if they were involved in Greek life,” Gerker said.

A typical workday, according to Gerker, involves reading and responding to a lot of emails. He also meets with campus partners, leadership from 28 different chapters of values-based social organizations and two graduate assistants from George Washington University. In addition, Gerker plans events and works with partners like non-profits that help connect students to their communities and create service opportunities.

“There was one semester where we [the Executive Board of the Panhellenic Council] were on our own except for two Graduate Assistants and Dominic Greene. There was no immediate advisor to go to, and a lot of work was being spread thin between the board and I,” Le said.

Le also said having Gerker around has been an immense support. His presence does not simply help her and the board, but also the overall Greek community, she said.

“This will be a significant undertaking, so having someone to help expand the sororities’ reach like Colin will be helpful,” she said.

Gerker said one of the biggest challenges in working with Greek life is the misconceptions about membership that he wants to correct.

“There is a problem with social culture; there is talk of values in recruitment, and Greek life is supposed to be having a positive impact on the community, but it often happens that members of Greek organizations are more excited for the upcoming party, for example, than for their service,” Gerker said.

Joe Reid, president of the Interfraternity Council, also said that there are misconceptions at AU that fraternities are solely social clubs, and he said he is focused on spreading the message that only a small portion of what fraternities do concentrates on social life.

Reid said his first impressions of Gerker were positive when he first interviewed for the position.

Female ambassadors speak at AU about the future of gender equality 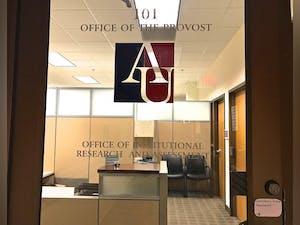 AU announces pass/fail option for students for remainder of semester