9:30 Club gets sinister with Earl Sweatshirt

Black block letters pasted across 9:30 Club read “SOLD OUT.” A sea of Supreme hats and pink and yellow donuts floated towards the entrance doors. Hundreds of teens descended upon the venue on Feb. 17 for none other than Odd Future member Earl Sweatshirt after the success of his debut studio album, “Doris.”

Earl Sweatshirt, teamed with California-based rapper Vince Staples and Odd Future DJ “Taco,” creating an ungodly raucous at 9:30 Club. Hives of teens swarmed around the entrance of the venue from 7 p.m., when doors first opened for Ratking, until 9 p.m., when Taco made his appearance to prepare the crowd for Earl’s grand entrance.

Taco deejayed various trap songs and a bit of Waka Flocka while the crowd pointed their arms towards the stage, moving back and forth with the beat.

A cacophony of screams arose: sporting a tan-colored flannel and snapback, Earl walked onto stage. He demanded the crowd to put their hands up in the air, and almost immediately the venue was buzzing with energy.

The crowd lost its mind as Earl starts with “EARL,” one of the most popular tracks from Sweatshirt’s eponymous first album he released free online in 2010 when he was just 16 years old.

Earl played a number of the most popular songs from “Doris.” To the crowd’s excitement, Sweatshirt played “Sunday,” “Sasquatch,” “20 Wave Caps” and “Chum” with added interactions between Sweatshirt, Staples and Taco.

Earl walked the top-most part of the stage and asked: “Mr. light man, can I get some ominous lighting?” A deep red and blue light floods the room and the bass became amplified. In unison Earl, Vince and Taco shrieked “BOUNCE, BOUNCE, BOUNCE!” A mosh-pit evolved from the crowd and finally the satanic sounds of “Hive” emanated from the venue speakers – a masterpiece of harsh sounds and bitingly sharp phrases. The crowd was extinguished; there’s only enough energy after being thrashed around by die-hard Earl fans to yell, “Like it’s nothing, cause it’s nothing, b*tch.”

After the Earl show, attendees had both battle scars and memories to last forever. 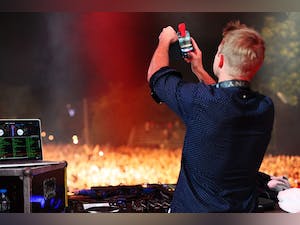 With the DC music scene reopening, here are four concerts to get you back to live music

Olivia Rodrigo’s debut album is anything but ‘SOUR’

AU alumna continues to work as an audio engineer in quarantine