Grow up AU, quit blaming the other side

My best friend at AU is Palestinian-American and I am a Zionist, American Jew. We obviously have some severe disagreements, yet we spend nearly all our time together. We do not skirt around talking about the Middle East. In fact, we talk about it constantly. Our discussions can get extremely heated, but we respect each other enough to hear and respect the other side. We do not vilify, or scream at each other.

If the two of us can be civil when discussing a conflict that involves our loved ones and our core identities, our fellow students should be able to have a civil, rational discussion. AU students need to become more tolerant.

The only way to describe events that have unfolded in D.C. over the past couple weeks is demented. There have been shootings, cars crashing into the White House and self-immolation on the National Mall. This has all been against a backdrop of a government shutdown.

AU students are highly political. Over the past week I have overheard my fellow students discussing the shutdown and assigning blame for it. I have heard guilt assigned to the Republicans, the Neo-Cons, President Barack Obama and the Democrats, or even a more generalized “The Government.”

The one answer I have not heard is the American people. We as Americans are fortunate enough to live in a democratic country, where we elect our representatives, and they represent us. Politics on both the right and left are getting more and more extreme, reflecting American society’s shift toward polarization. Campaign experts would say that we have lost whatever veneer of civility and sanity that American politics possessed.

The trends we are seeing in national politics are being reflected at our university. The same self-righteousness, arrogance and partisanship which have brought our country to its knees, simmers away on our campus. You see it in protests on campus such as the one against Sgt. Benjamin Anthony last year. I am not advocating the acceptance of opinions, but I am advocating for tolerance. You can detest an opinion, but you should have the maturity and humility to respect those who have the “hubris” to disagree with you.

Come on, America. And come on, AU. We are adults and it is about time that we started acting like it.

Andy Wallin is a junior in the School of International Service. He writes a bi-weekly column which comes out every other Tuesday. 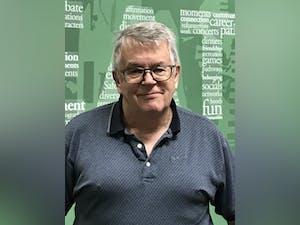