On Aug. 28, thousands of dignitaries and citizens alike tread the ground that 50 years earlier held the footprints of Martin Luther King Jr’s. speeches. From Rep. John Lewis of Georgia to President Obama, many offered both a congratulatory and uncomfortable message.

On one hand, conditions related to the plight of the African-American have undergone a transformation from the blatantly racist segregation policies of the 1960s. African-Americans are no longer hosed down like dogs for peacefully demonstrating in the streets. And African-Americans are no longer obliged to enter a different door to order lunch or go to the bathroom. Yet, on the other hand, one can make an argument that racism has become implicit, rather than explicit – an unfortunate acknowledgement that renders the problem unsolved and ignored by many.

Implicit racism has its origins in at least these three startling facts.

For one, it is horrible that the U.S houses the most amount of people in jails and penitentiaries in the World; (even more than authoritarian countries with sketchy human rights records, such as Russia and China). To exacerbate the situation, a disproportionate majority of the nearly 1.6 million Americans incarcerated are African-American.

Second, African-American unemployment is almost double that of Caucasians. It is no surprise that the recession and economic malaise has disproportionately hurt African-Americans.

Third, African-American children have a much lower chance than Caucasian children to finish high school, failing to take into consideration the insurmountable challenge of college.

King’s call to end explicit racist policies, like segregation, has been amazingly successful, coupled with endowing African-Americans better job prospects. He served as the impetus for emboldening African-Americans to take to the streets in peaceful protest, in the hopes of emanating change. However, there has been one aspect of his “I Have A Dream Speech” that has been largely ignored – the call to foster the local community.

At its core, the word “community” can hold a multitude of meanings. A community can act as your immediate group of friends. It could stand for the AU community, or your cohort of colleagues at the office. Regardless of the context in which you use the word, it implies an organizational structure where each member contributes in whatever method is deemed the best, in the hopes of improving the welfare of the community overall.

Individuals who have heard the “I Have A Dream” speech understand King’s call for a community forged between African-Americans and whites, among other races. Yet, because King’s message invoked the word God and religion, (let’s not forget, he was a Baptist preacher), it has been deemed too controversial to openly discuss and thus has not been sufficiently explored. King identified the connection between morality and African-American economic, social, and political survival. This connection continues to be as vital as ever.

There is a need for another religious revival in the countless local communities around America. Unfortunately, a large number of these communities are populated with African-Americans, living in de-facto ghettos, similar to the ones mentioned by King. Our efforts aimed at combating poverty, homelessness, and lack of education (to mention a few) must revolve around the community through a broad approach. We cannot funnel thousands of dollars into failing public schools or erect new public housing alone. Those measures help, but we must engage and uplift the community, giving residents a say in their own awakening.

We need to ensure that local houses of worship are playing an active role in improving the productivity and moral conscience of the community. It is instrumental to provide individuals with deprived backgrounds a home, ensuring at least some stability to get their lives back on track. There is no worse feeling than wandering through life, devoid of any ambition or direction.

At least for myself, my religious beliefs comfort me. Regardless of whether the sea, which is my life, is choppy or tranquil, my faith is one refuge, one home that no one can revoke. Religion itself can be used to lift thousands of individuals out of poverty, hopelessness, and the welfare rolls. We must focus on transforming this portion of King’s dream into reality.

Kyle Graczyk is a sophomore in the School of Public Affairs and School of International Service. 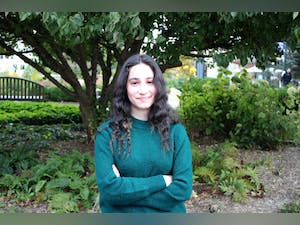 Opinion: AU doesn’t just want your money, it wants your emotional labor too