The No. 11-ranked AU Eagles lost, 19-17, to the No. 26 Maryland Terrapins on Sunday, extending their losing streak to three after tough losses at Lehigh University and Rutgers University.

The Terps proved to be too much for the Eagles winning the annual Bender Take Down.

The match started rough for AU, with Nick Arajau falling to Maryland’s Shane Gentry after two overtime periods. Gentry managed to score two points on a takedown in the final ride-out.

In a battle of the ranked, No. 14, the Eagles’ Matt Mariacher, won his bout in overtime, scoring two points for a takedown against Maryland’s Jon Kohler. Mariacher brought the match within four points for AU, 7-3.

No. 10 Ganbayar Sanjaa showed off his strength for the Eagles at 149 pounds, almost playing with Maryland’s Ben Dorsay, letting him escape three times, so Sanjaa could continue to score takedown points.

Steve Fittery, who is ranked No. 1 in the nation at 157 pounds, continued AU’s hot streak over ranked No. 14 opponent, Kyle John. Fittery nearly pinned John early, but realizing a pin would be too difficult, the No. 1 ranked wrestler started scoring takedowns, winning by a total of 13-4 and moving AU into the lead, 10-7.

Maryland came out after the 10-minute intermission ready to flip the scoreboard again, looking to put the match away, and momentum started to swing in the Terrapins’ favor.

At 165 pounds, Maryland’s No. 3 ranked Josh Asper systematically took apart the Eagles’ Patrick Graham, defeating him 7-1 to pull Maryland even again with AU 10-10.

AU’s Tanner Schaffer didn’t have anything in the tank against No. 19 Mike Letts. Shaffer looked exhausted as Letts continued to flip him on the mat, leading up to a technical fall, 19-4. The bout launched Maryland into the lead 15-10.

Thomas Barreiro continued to struggle, falling to 9-22 overall after losing to Corey Peltier of Maryland. The Terps seemed to be in full swing, taking the lead 19-10 and putting the match nearly out of reach for the Eagles.

AU's Daniel Mitchell, ranked No. 18 in the country at 197 pounds, was able to successfully defeat Christian Boley. Taking an early lead with a couple takedowns in the first two periods, Mitchell looked like he would have a bigger win at the finish, but Boley, with a few escapes and a takedown was able to pull close by the end of the bout, losing just 8-6.

With the loss, the weight of the match fell on No. 5 heavyweight, Ryan Flores, to pin unranked Spencer Myers. Flores looked hot early in the bout, grabbing three takedowns in the first period, but exhaustion set in for both wrestlers and Flores was unable to make a significant impact either the second or third periods towards the pin. In the third period, time was stopped with about a minute to go for an injury timeout, and Flores came out with new energy, but was only able to win a 15-7 decision.

The decision gave AU the four points for the win, but the Eagles would fall short overall in the match, 19-17.

The Eagles will have a week off until next Sunday’s match, when they host Bucknell University in the final match of the season before the EIWA Championships in March. AU will be looking to stop their skid before heading off into championship contention.

Letter from the editor: Being a black college editor covering the George Floyd protests

Staff Editorial: The University has institutional power to act. 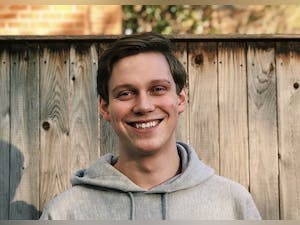