It's all over for Red Sox Nation

Yes Red Sox fans, that noise that's kept you awake is the pounding of obnoxious inflatable balloons. That image you see when you close your eyes is an innocent stuffed animal.

You're tossing, you're turning and you keep flipping over to the other side of the pillow. When will this nightmare end, you ask?

When the Los Angeles Angels of Anaheim, with their "thunder sticks," "rally monkeys" and 100 regular season victories, are finally finished dismantling Red Sox hopes of a 2008 World Series appearance.

The Angels were a buzz saw this year, beating up on every team in sight. Their bullpen is a lockdown with a lethal seventh, eighth and ninth inning combination of Jose Arredondo, Scot Shields and Francisco Rodriguez.

The Red Sox were no slouches either, winning 95 games in a far more competitive division. Statistically, the two teams are eerily similar to each other. Boston's team ERA was 4.00, while Los Angeles' was 4.01, according to Baseball-reference.com.

But lets be serious: the Red Sox postseason bully isn't starting until game three, and Josh Beckett's health is still a mystery to all in Bean Town. Not to mention that Mike Lowell and JD Drew are banged up as well.

Who else can picture it now?

Francisco Rodrguez came in with his 62 regular season saves and closed out a game five victory with the Angels up by three runs (K-rod loves those easy saves!).

After he gets it done, Rodriguez rips off those nerdy goggles, pirouettes like Emmitt Smith on "Dancing with the Stars" and points to the sky with both fingers. His teammates mob him, while in the crowd Kobe Bryant gives Jack Nicholson high-fives and hugs as if it was the Staples Center.

I wonder what Curt Schilling would say about it in his blog?

You can reach this columnist at sports@theeagleonline.com. 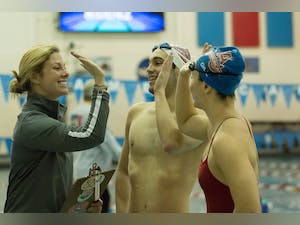