I had a babysitter - a lacrosse player at the local college and one of my mom's students - who was a big boxing fan. He never stopped talking about how Mike Tyson, then a champion, was unbeatable. And he'd fill me in on all his victories, since they were shown on premium cable at hours well past my bedtime.

Then later, he told me about Buster Douglas beating Tyson for the title, and then about Riddick Bowe beating Douglas, and then about Evander Holyfield beating Bowe. Soon, I started following on my own, at least as much as a third-grader could.

I remember when Holyfield was "the" champion, and there was this "other" champion from England. His name was Lennox Lewis, and no other champions would fight him, they said, because he wasn't good enough. The media agreed, and for a long time, you never heard much about him.

But my friend Bobby, who also liked boxing, didn't buy it. If you were big and bad, and you wouldn't fight this guy who wanted to fight you, this other guy must be bigger and badder, he said. And Bobby knew about being bigger and badder on the playground, so I believed him.

Much later, in 1999, when Lewis beat Holyfield in Madison Square Garden, only four judges called the bout a draw, but the world knew what Bobby had known for years: Lewis was the biggest and baddest, and the boxing powers were trying to hide it.

They failed when Lewis won a rematch in Las Vegas eight months after the New York debacle, becoming the first undisputed Heavyweight Champion in recent memory.

This weekend, Lewis officially announced that his June TKO win over Vitaly Klitschko would be his last fight. "The Lion," 38, retires with a 41-2-1 record, and as the WBC defending champion. He avenged his only two losses, to Oliver McCall in 1994 and to Hasim Rahman in 2001, in rematches. As for the rest of his wins, Lewis fought and beat everyone who wanted to fight him. And he should rank among the greatest boxers of all time.

But with the media giving only moderate attention to his retirement, it's already clear that he won't. Why would he? In a sport where championship match-ups are arranged based on how many people will buy Pay-Per-View rather than who the best two fighters are, it's sadly unsurprising that Lewis's exit is a sidebar and not a feature story.

For that reason, boxing is fading in American sports culture. If boxing wanted to truly return to the masses, it should have embraced Lewis - not in 1999, but in 1993. Lewis was one of those guys who just got it done. He didn't care if he threw endless jabs for 36 minutes. He cared about winning, whether it be pretty or ugly. Despite standing 6-foot-5 and weighing nearly 250 pounds, Lewis was a rare heavyweight who was willing to box an opponent for 12 rounds rather than head-hunt for four and risk a stupid mistake.

And when Holyfield, Bowe and Douglas wouldn't fight him, he took all other challengers. That hurt him in 1994, when he stepped into a one-punch TKO from McCall. But he kept fighting, and five bouts later regained his crown. By then, he was already past his prime at 32, and would still wait two more years before being recognized as the true champion in the United States.

But he waited. And when judges left the Garden with his title, he waited eight more months, then calmly destroyed Holyfield again. Still, it took beating a washed-up Mike Tyson senseless in Memphis, Tenn. in 2002 to truly gain the respect of boxing insiders.

Promoters never got the hint that sports fans could respect workmanlike dominance, like Larry Bird's, nearly as much as brilliant dominance, like Magic Johnson's. If they had, Lewis may have been greater sooner. And today we'd be talking about the retirement of arguably the greatest heavyweight ever. And we'd be talking about boxing as one of the prevalent sports in our culture, the way it was in Muhammad Ali's '60s and '70s or Rocky Marciano's '50s and so on.

Lewis is the first defending heavyweight champion to retire since Marciano in 1956. And a few lucky ones can look back at all the fighters in between and say, "Hey, Lennox was pretty damn good."

Bobby could've told you that. 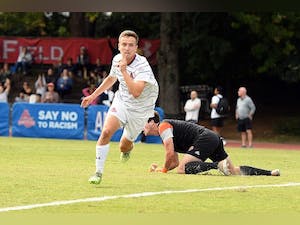