From the Eagle Sports Desk

Add two more Patriot League titles to AU's growing list of championships. The Men's and Women's Cross Country teams captured their second-consecutive PL championship at Lafayette, defeating Army and Navy on an abnormally hot Saturday. The Men's team defeated Navy by 24 points and Army by 79 points, with junior Pat MacAdie finishing in first place. MacAdie won the individual title 15 seconds faster than the second place runner in a time of 25:18.8, which is a personal best for MacAdie. "I was pretty surprised ... I didn't think we were going to win," MacAdie said. "But we ran as a team and it's a definite confidence builder when you're surrounded by your team members ... you push harder with them around." Senior David Seymour finished second for the Eagles and fourth overall with a time of 25:42.5. Junior Sean Duffy, sophomore Phil Gaeta and junior Danny Maurer took home the sixth through eighth spots with times of 25:43.7, 25:44.8 and 25:45.4, respectively. The Women's team secured the top three spots of the race, defeating Army by 27 points and Navy by 33 points. Sophomore Keira Carlstrom won the league individual title in a time of 20:02.8, 41 seconds faster than the rest of the field. "I felt confident going into this race because I knew we had control," Carlstrom said. "We work hard all season and we were ready to see results." Freshman Kelley Taylor and senior Jen Baclawski placed in second and third with times of 20:45.6 and 21:00.8, respectively. Junior Whitney McNees finished sixth, breaking her personal record with a time of 21:08.6. Sophomore teammate Zaia Wharton finished 18th with a time of 21:51.50. Both teams will spend the next two weeks preparing for the NCAA Mid-Atlantic Regional in Lock Haven, Pa. on Saturday, Nov. 15. 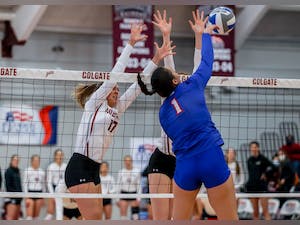