But the game wasn't about the result. The HoopStars, a team comprised of Eastern European high school aged players, were hardly a match for the bigger, stronger, faster, and more experienced Eagles. Instead, the game was simply a first step, and a baby one at that, on the path from November to March. All things considered, AU landed on the right foot.

"It's a good start," said AU head coach Jeff Jones. "I thought our starters concentrated and pressed well. We had a bit of a lull later in the first half, but the second half was much more consistent."

That lull, which was the last twelve minutes of the first half, still saw the Eagles outscore their opponents 18-15, after opening up a 25-6 lead. The significant run the HoopStars made that half with 2:30 remaining, when a 7-2 spurt pulled the youngsters to 43-21 down. By that time, the Eagles had already used every player on the bench except for junior guard Jason Thomas, who sat with an ankle sprain, and sophomore center Jarrod Kohl.

"In practice, I threatened some of our guys by saying we might just play six players," Jones said. "Our bench must play with a fire for us this year. They did a good job of that in the second half tonight."

"Jamaal [Caterina] played the best he's played all year," Jones continued. "And to be honest, junior forward Patrick Okpwae surprised me considering how he's performed in practice. He made good passes, caught the ball in the middle of their zone, and blocked some shots."

Okpwae led the Eagles in rebounds with eight. Rodriguez had five assists, and Lithuanians Lekavicius and Petrauskas had three steals each.

The Eagles will next take the court a week from Sunday against a much tougher Sakalai Vilnius team, a Lithuanian Pro Squad, in another exhibition at Bender. Six days after that comes the first regular season contest, a trip just outside town to No. 25 Maryland. For AU, there's a still a lot of work to do in that time.

"These games let our guys learn how to play in different combinations and get used to each other," Jones said of the exhibition games. "But by the Vilnius game we want to have a better idea of our rotation. And we need to do a better job taking care of the ball. Against this defense tonight, fourteen turnovers are too many."

That, for the Eagles, is just the next step of a long journey. 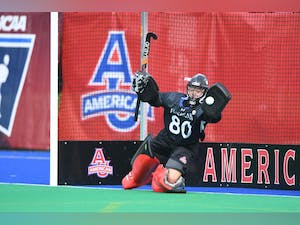 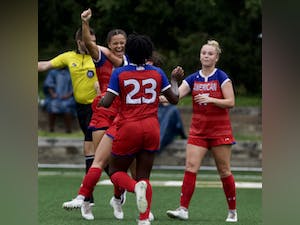 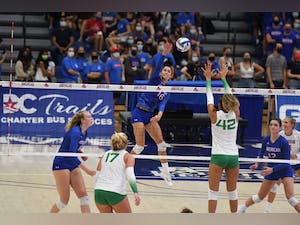