Briefs from the Sports Desk

The Women's Soccer team heads into the Patriot League Tournament with five players on the First and Second PL All-League teams.

Konig holds the AU career record in assists with 20 and is fifth all-time with 34 points. In 2002, Konig set the all-time season record with 13 assists. Jimenez is third in AU history in goals, assists and points with 23, 16 and 62, respectively. Jimenez has scored five game-winning goals in her career, and Konig has scored three.

Ricupero's 29 points ties her for seventh in AU history. Defender Winkler started all but one game in her career and was named the league's Defensive Player of the Week for Oct. 13. Last, but not least, Gonzalez scored four goals during her first collegiate season.

Senior 'keeper Laura Miller received the Defensive Player of the Year award, freshman Camila Infante was named the Rookie of the Year and head coach Steve Jennings won Coach of the Year.

Miller led the league with the highest save percentage at .860 and nine shutouts. She also holds the AU individual season record in shutouts. Not to mention, Miller was named to the South Squad of the STX/NFHCA North/South Division I All-Star Game.

Infante helped lead the team to one of the most successful offensive seasons with six goals and eight assists.

In his fifth year of coaching, Jennings earned Coach of the Year for the first time.

When a volleyball team gets out-blocked 8-2 on the road, the match isn't likely to have a favorable outcome.

That's just what happened to the Eagles (15-9, 11-0 Patriot League) when they traveled to Philadelphia last night for a midweek meeting with Atlantic 10 power Temple.

Temple was simply too strong for the Eagles as it got block assists from five different players and hit .415. The Owls were led by defending Atlantic 10 Player of the Year Yamit Haba, who had 13 kills.

AU's attack was stifled as the Eagles hit only .158 and made 27 errors. This was their lowest attack percentage since their Sept. 13 match at Arizona, in which they hit .067.

Kucerkova provided most of AU's offense and was the only Eagle with kills in double figures. Natacha Cornaz's eight kills and Cutrina Biddulph's seven rounded out the bulk of their team's attack.

The Eagles will look to regroup this weekend on a road trip to conference rivals Colgate and Bucknell. AU faces the Bison Saturday in a battle of the PL's top two teams. Bucknell is 10-1 in the conference. 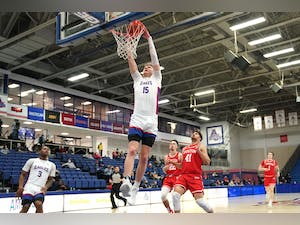 AU men’s basketball gets blown out by Boston University 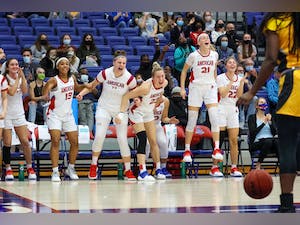 American University 66, Colgate 52: Eagles cruise past Raiders behind Jade Edwards in second half