It was a banner season for AU Cross Country in 2002 as Samia Akbar qualified for the NCAA championships and the Men's and Women's teams each won their first Patriot League titles.

This fall, they are hoping to do it again. Practice begins today for AU Cross Country in the hills of Northwest Washington as the men's and women's squads look to build on last year's success.

Head Coach Matt Centrowitz has high expectations for the season, and for good reason. With promising freshmen complimenting a core of veterans on both squads, a repeat of last year's performance is well within reach.

On the men's side, Centrowitz said that four of last year's top six runners are in action this year. Senior Matt Seymour, who placed second in the 2002 PL Championships, will captain the team. Senior Frank Malpigli and juniors Sean Duffy and Pat McAdie join Seymour as the men's best.

The women return five top runners and are led by senior captain Jen Baclawski, who was named the PL Cross Country Scholar Athlete of the Year last fall. Joining her will be senior Leah Heinecke-Krumhus, junior Whitney McNees and sophomores Keira Carlstrom and Zaia Wharton.

Notably absent from the women's squad this year is Samia Akbar, who graduated this spring after a stellar career at AU. Akbar was the first woman in the school's history to go to the NCAA Cross Country Championships, where she placed 60th out of 254 runners, the best finish ever by a PL woman in that event.

"She raised the bar for the team," said Centrowitz. "The girls are less intimidated by nationally competitive runners thanks to her."

Akbar is now a graduate student at AU. While she can't represent the team at events, she will remain with the squad and provide guidance for runners.

Centrowitz is enthusiastic about the notable newcomers to each squad. Brendan Fennell is a key addition to the men's team. He was one of the best runners in New York, qualifying for the Footlocker National Championships and running the mile in 4:11 as a junior.

The Eagles begin their season on Sept. 13 at the Mount St. Mary's Invitational. Other teams begin practice early in August, but AU begins late in the month. Centrowitz said that while this puts his teams at a disadvantage in early meets, it prevents runners from being overworked when outdoor track arrives in the spring.

"Cross country is good, but it's a long way from September to the spring," he said. "The top runners always need to be at their best."

Cross Country is only the beginning of a yearlong program that culminates with outdoor track in the spring, he added.

Centrowitz said he expects the teams to be in good form by October. The Eagles begin the month at Lehigh's Paul Short Invitational on Oct. 4. Villanova and Georgetown will join AU at that event, which Centrowitz said will be a good preview of how the squads will perform in the final stretch of season.

"The talent and determination is there," said Centrowitz of where his teams stand two weeks before the first meet.

It will just take time to put it all together in the Eagles' quest to avenge their conference titles.

Column: Can one man save Washington’s NFL team from more defeat? 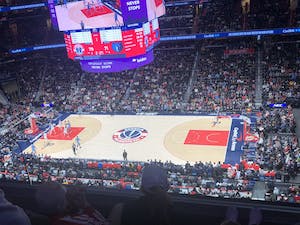 Column: Why are the Wizards in the bubble, and how can they make it work for them?