This year, as the door opens and the dance students raise their eyes, they are met by a vaulted ceiling and walls of stained glass windows.

They are in the Tenley Chapel, which has recently been converted to a dance studio. After enduring pigeons, rats and roaches in the Cassell Building, the Department of Performing Arts is thoroughly enjoying its new location.

"The chapel is beautiful, just having the stained glass. It's very inspirational," Elissa Fletcher, a College of Arts and Sciences first-year graduate student, said.

After dance facilities in the Cassell building were closed, the DPA was forced to hold its classes in alternate locations until permanent facilities become available.

"Cassell got cold in the winter, hot in the summer. It was an old barn of a building," Naima Prevots, chair of the DPA, said.

At the end of last year, the dance program was left in limbo. Many students and faculty members were uncertain as to where they would hold their fall classes.

"I think everyone, especially in the graduate program, went through a lot of emotional stress. This just, in a nutshell, is a lot more comfortable," Katrina Toews, a CAS adjunct faculty, said.

The discomfort Toews referred to is the run-down condition of the Cassell building. Cassell had neither heating nor air conditioning.

"We had to personally contribute appliances to be comfortable," Meisha Bracken, CAS adjunct faculty, said. "We were in a negative situation last year. No one knew what was happening over at Cassell until we started being vocal. Now we're headed in a very positive direction."

Although the Tenley location is sometimes shared with Washington Semester students, the chapel and auditorium have proven to be ideal for dance studios, especially after remodeling. The auditorium also doubles as a place for some theater classes.

"When new prospective graduates come to visit, we can be proud of our facilities," Bracken said.

Once a full-time church complete with an altar and weekly services, the chapel's conversion has consisted of new floors, new barres, resilient floors and full-length mirrors. The chapel area is used mostly for ballet, modern and jazz dance, while the auditorium has a special floor for tap dancing classes.

"Everyone is very thrilled. The administration has done a wonderful job of setting it up for us," Prevots said.

The only minor problem that has appeared is the location. Undergraduates usually have the majority of their classes on main campus and the trip to Tenley can be a problem in scheduling.

"We assumed there would be about a month of adjustment," Prevots said.

Walking to the Tenley campus takes only about 10 minutes according to Prevots. Incomparison to many larger universities, AU does have a small campus. Sometimes students take the smallness for granted, Prevots says. While students become used to the extra travel time, teachers are being very considerate of the scheduling problems and have worked around most conflicts, she said.

"We have to adjust timing-wise. There is class time that is lost, but we're not complaining about that. This is a warm and welcoming space as opposed to Cassell, which was the opposite," Bracken said.

For the future, the DPA will be utilizing a generous donation from Dr. Cyrus and Myrtle Katzen. The Katzens gave a $10 million monetary gift plus an art collection valued at $5 million.

The new arts center will house facilities for the theater, visual media, dance and studio art departments. Administrators have already begun meeting with architects to discuss building the center.

"We can't wait, but we know that it will take a while. Between visual artists and dancers, I think we have enough people to support an arts center," Bracken said.

Prevots herself has been a champion for the new dance space project.

Just from last year to this year, AU's graduate dance program doubled the size of its first-year class.

"People that study dance here at AU, they use resources in other departments. We really do want to be a part of the AU community. That's why our program is so strong," Bracken said.

As the new center takes shape, the arts will have a stronger presence on campus. Prevots is optimistic that the department will be able to share its passion for the arts will the rest of the campus. 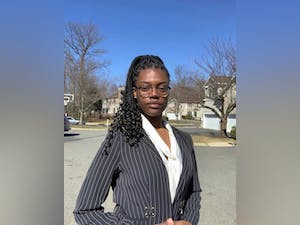