Hispanic Heritage Month may have come to an end, but that doesn’t mean that you have to stick to watching only the suggested movies on Netflix. There's an endless list of powerful films that feature Latino directors and actors spanning a myriad of genres, styles and narratives. The following movies are exceptional, stand-out works each telling different stories in beautiful ways.

“Roma” is a 2018 drama directed and written by Alfonso Cuarón. Filmed in black and white, it is semi-autobiographical and follows a young Indigenous Mexican woman named Cleo (Yalitza Aparicio). Set in Mexico City during the 1970s, “Roma” follows Cleo as she works as a domestic worker for a wealthy family. As distress starts to appear in the family, Cleo simultaneously learns she is pregnant. “Roma” provides the audience with incredible social commentary and a beautiful, timeless story about Indigenous women in Mexico. The film received 10 Academy Award nominations (including Best Picture, Best Actress and Best Supporting Actress) and won three (Best Cinematography, Best Director and Best Foreign Language film).

“Roma” is available to stream on Netflix.

“Real Women Have Curves,” directed by Patricia Cardoso, is a dramatic comedy about a young Mexican girl, Ana Garcia (America Ferrera), who dreams of going to university. Based in east Los Angeles, Ana struggles with pursuing her ambitions because of her mother, who prefers for her to work for their family business. Ana's dreams are continuously shot down by her mother, which strains their relationship. “Real Women Have Curves” is a captivating story about Latina women in low-income communities who bear the weight of complicated family dynamics. This film portrays intense mother-daughter relationships through a compelling story and comedic elements.

“Real Women Have Curves” is available to stream on HBO Max.

Based on the beloved Broadway production created by Lin-Manuel Miranda, “In the Heights” is an enchanting musical. The film, directed by Jon M. Chu, highlights Latino communities in Washington Heights, New York City. “In the Heights” showcases everyday city life while adding beautiful elements of Latino culture to create a fascinating and imaginative universe for its characters and audience. Similar to Miranda’s other works, the soundtrack blends hip-hop, rap and Latin music to create a dynamic cross-cultural atmosphere. The movie fuses together the cultural importance of family with the appreciation of music.

“In the Heights” is available to stream on HBO Max.

“Amores perros” is Alejandro G. Iñárritu’s directorial debut. The film intertwines three separate stories becoming connected after a car crash. Based in Mexico City, “Amores perros” intertwines dogfighting — where dogs are trained to fight other dogs for money — with these three central stories. In each story, a dog plays a significant role. The film has political undertones, involving tales of domestic violence, motherhood and friendship. Iñarritu takes the audience on a spectacular journey within this film, incorporating human and animal relationships into a fascinating reflection of humanity.

“Amores perros” is available to rent on Amazon Prime Video.

“McFarland, USA” is a 2015 drama directed by Niki Caro. The film follows an incredible true story about a 1987 high school cross country team from McFarland, California. Both the high school and the city were populated by majority Latino, low-income families. The film follows a middle-class ex-football coach (Kevin Costner) who gets fired and moves to McFarland with his family. The coach discovers the natural athletic talent of the community’s young men when he begins teaching at their local high school. The team becomes incredibly successful, persevering through both racial and financial hardships. Themes of identity, teamwork, perseverance and unity are interestingly interwoven to produce a film as enjoyable as it is complex.

“McFarland, USA” is available to stream on Disney+. 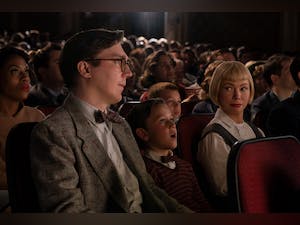